Illustration by Patrick Leger Last fall, my and I drove to our daughter’s place in Hot Springs, S.D., to see... 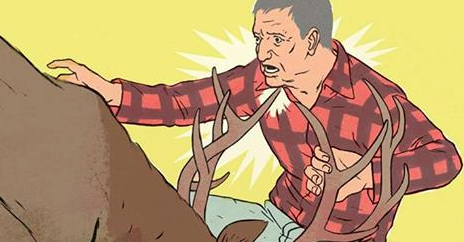 Last fall, my and I drove to our daughter’s place in Hot Springs, S.D., to see a couple of bull elk that had their antlers locked together. By the time my wife and I arrived, one of the bulls was dead. My son-in-law, Brad, suggested we try to free the bull that was alive by sawing off one of the dead elk’s tines. After Brad and I discussed our plan, I slowly approached the elk and grabbed the rack of the live bull. As Brad came toward us with the saw, the elk lunged at me. My hand slipped off, and the antlers hit my face.

“You have a hell of a hole in your neck,” Brad said. “And it’s bleeding good, too!” It had happened so fast that I didn’t even feel it.

The wound was right above my collarbone, about an inch in diameter. We rushed to the hospital. The doctor there took one look at me and said, “We’re not going to touch you here. We need to get you to Rapid City.” About then I realized the elk might’ve done more than just poke me.

The Rapid City doctor thought the elk had hit an artery beneath my rib cage and said he’d have to operate. The surgery lasted two hours. Turns out, it was a smaller blood vessel, not the artery, that had been severed. But I lost 4 pints of blood.

My son-in-law stayed with the elk and called South Dakota Game, Fish and Parks. They came and broke the dead elk’s antler with a high-powered rifle, which released the elk. They were sure he’d live if he found water.