How to Place Your Deer Stand in Treeless, Open Terrain

Fifteen years ago, Wisconsin bowhunter Todd Meyers got permission to hunt a prime Illinois farm. He was elated—until he realized... 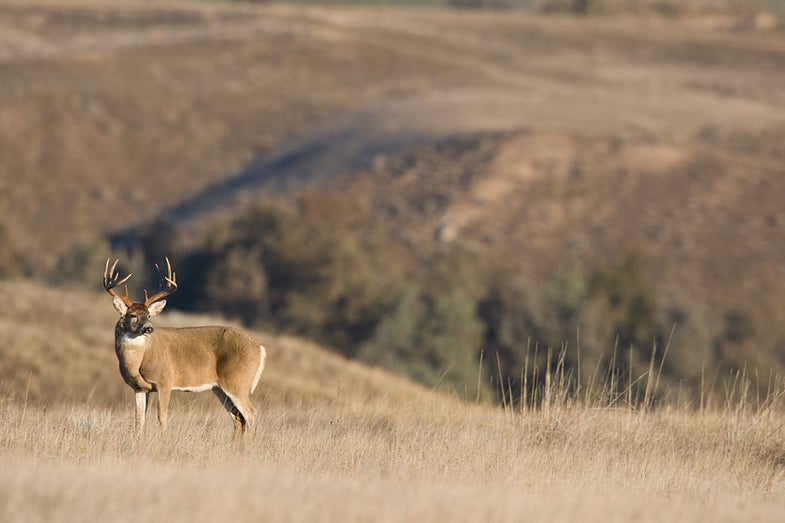 Fifteen years ago, Wisconsin bowhunter Todd Meyers got permission to hunt a prime Illinois farm. He was elated—until he realized that he’d gained access only to a vast soybean field, and not to the bordering woods or overgrown CRP field. The farmer didn’t own those properties. Nonetheless, Meyers has taken several Pope and Young bucks there by using two tricks for getting into bow range.

The Bale Blind
His first ploy involves making a ground blind out of hay bales. Each summer, the farmer sets aside four round bales for Meyers, who sets them up at least two weeks before the bow season. “I place the bales in a square so there’s room to sit in the middle and enough space at the corners to shoot between them.”

Meyers also fastens a tent fly over the bales to darken the blind’s interior and keep out any rain. He positions the blind within easy bow range of the fence crossing. One corner (or shooting window) faces the trail that crossing deer follow, and another faces the fence itself, as bucks commonly cruise along the barrier during the rut.

Besides hiding Meyers from whitetails, the bale blind has a strong, sweet smell that he says covers his human scent. “I once had a doe munch on one of the bales directly downwind of me.” He’s tried several commercial ground blinds, but Meyers claims they flap too much in the wind and spook deer. “I’ll stick with my bales.”

The “Tree” Stand
In the absence of trees, Meyers’s other trick is to create a fake tree out of an old telephone pole. The farmer helps out by using an auger to drill a 6-foot-deep hole to anchor the timber.

That done, Meyers adds cover by attaching branches from artificial Christmas trees. He drills holes just large enough to accept the wire end of each limb and pushes them in place with a dab of PL200 Construction Adhesive. “You can bend the limbs into any shape you want,” he says. Finally, he ascends with climbing sticks (screw-in steps can pull out of the weathered pole) and hangs his treestand. “The deer don’t even look twice.”