A Brief History of Venison (And Why You Should Eat It)

Forget apple pie. There is no food more fundamental to this nation than a haunch of venison. 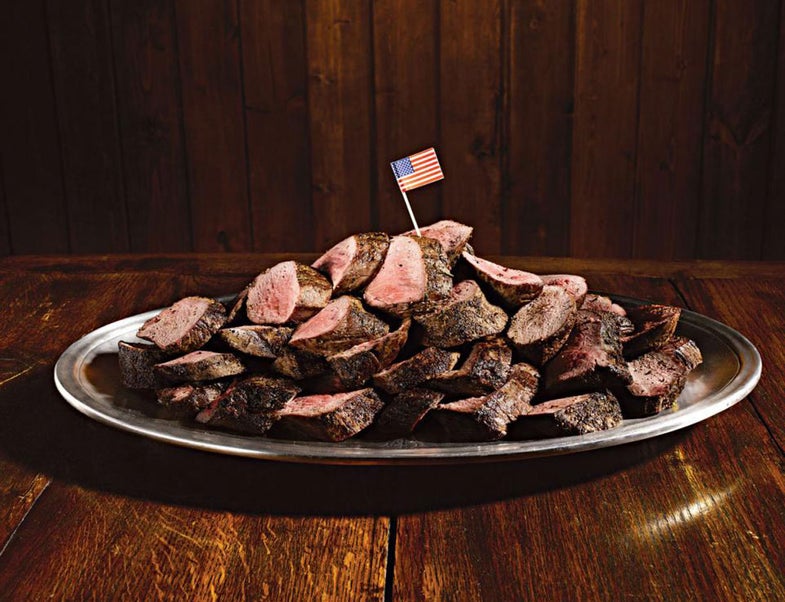 Before there was an America, there was America’s meat. The first European explorers in the New World came face to muzzle with astonishing numbers of “stag” that met them just beyond the Atlantic dunes—and they greeted the game early on with blasts from their muskets. Plymouth pilgrims and Wampanoag natives ate venison at the first Thanksgiving, saying grace over the whitetails that staved off starvation. Pioneers, fur trappers, priests—the quest for New World freedoms, riches, and souls was fueled by the flesh of whitetail deer. And long before these settlers arrived, whitetails formed the very sinew and soul and sustenance of the first Americans—Ojibway and Shawnee, Seminole and Creek, Santee and Tuscarora.

I don’t want to overstate the case, but that would be difficult: From the beginning, venison made America. Back in the day, if you wanted to eat, you ate a highly processed form of acorns and persimmons and chestnuts and greenbrier. You ate the very fabric of the forest. You ate deer.

You no longer have to, of course. Your local grocer stocks the flesh and bones of cows, pigs, goats, sheep, chickens, ducks, geese—some of which, praise be, are raised free of chemicals and confinement and are nearly as free to romp and roam as, well, a whitetail deer. Yet despite all of this, some of us still choose to kill a deer, disassemble its limbs, fuss over freezing methods, and trade recipes with hunting buddies like ladies planning a church bazaar.

Why? Because venison is low in fat. Because it can be obtained relatively cheaply. Because it is free of the pharmacological stew of growth hormones, antibiotics, and antifungals fed or injected into commercial livestock. Because venison resonates with the current slow-food movement, and locavorism, the hip new mantra of community-based consumption that short-circuits the burning of fossil fuels. Eat a deer, save the planet.

But there’s more to venison than a mouthful of healthy protein. There are qualities to deer meat that can only resonate with the person who’s shopped for groceries with a finger on the trigger. Killing a deer is a kind of acceptance of the interconnectedness of life. Dragging a deer from the woods is sweaty work, but work salted with the knowledge that your family will say grace over your efforts for a year or better. And sitting down to a venison supper brings it all back—the shot and the sweat, sure. But also the wet smell of dawn in the woods, the crunch of frost underfoot, the bobcat dozing in the sunlight at the base of your tree. Good seasonings, those.

Some of the best chefs in America understand this innate connection between whitetail deer, the wild places where they live, and the plate. Even nonhunting chefs share the satisfaction gained from gathering one’s own food. And they certainly understand that, for all its positive attributes, venison’s taste just might trump them all. That’s why the five chefs we’ve featured here serve venison from their own kitchens. And that’s why they’ve agreed to share their best venison recipes with us.

So forget apple pie. There is no food more fundamental to this nation than a haunch of deer.