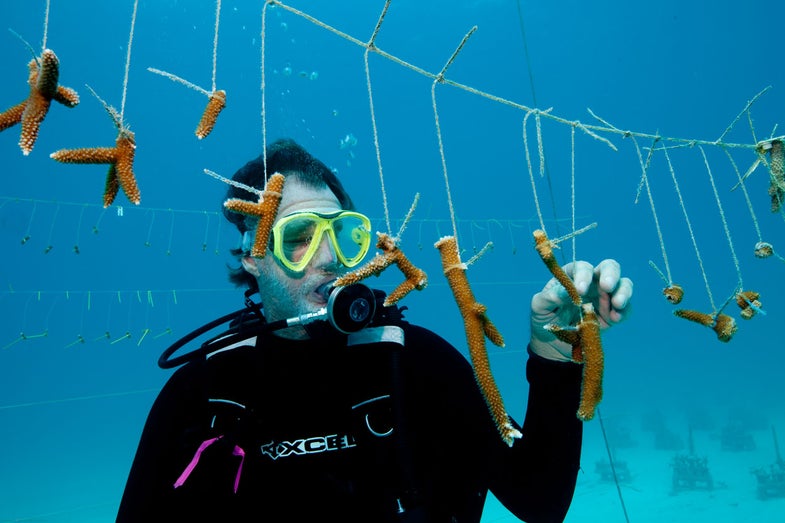 After his tropical-fish business exposed him firsthand to coral reef loss, Nedimyer discovered–while helping his daughter with a 4-H project–that it was possible to grow coral by placing cuttings on cement bases. That eventually led to his founding of the nonprofit Coral Restoration Foundation. “We had to learn all the lessons about farming coral,” says Nedimyer. “And we’re still learning.” Nedimyer has replanted 13 reefs in the Florida Keys, which benefit grouper, snapper, snook, tarpon, and other sportfish. Recently, nursery-grown coral that he transplanted has successfully reproduced on its own–a first. –Mike Toth

Boughton and his friend Tony Morrow have been taking kids turkey hunting for 25 years. As members of the National Wild Turkey Federation, they helped set up Nebraska’s Youth Mentored Turkey Hunting Program. Boughton chaperones about two dozen kids on turkey hunts each year, usually waiting until late in the season before taking a bird himself. “When’s that next generation going to take hold?” he asks. “I think that’s one of the big goals we have as conservationists.”

Craft is an active member of the Rocky Mountain Elk Foundation (18 years), Ducks Unlimited (21 years), the National Wild Turkey Federa tion (eight), and Women in the Outdoors (seven). She has helped start a chapter of each respective group. A retired teacher, Craft and her husband, Gary, recently started a shooting club for students at Sullivan County High School. “When they step onto that firing line, they become adults,” she says.