F&S Classic: How to Photograph Dogs!

At the last meeting of the Madison Avenue Rod, Gun, Labrador Retriever and Bloody Mary Benevolent Association one of the... 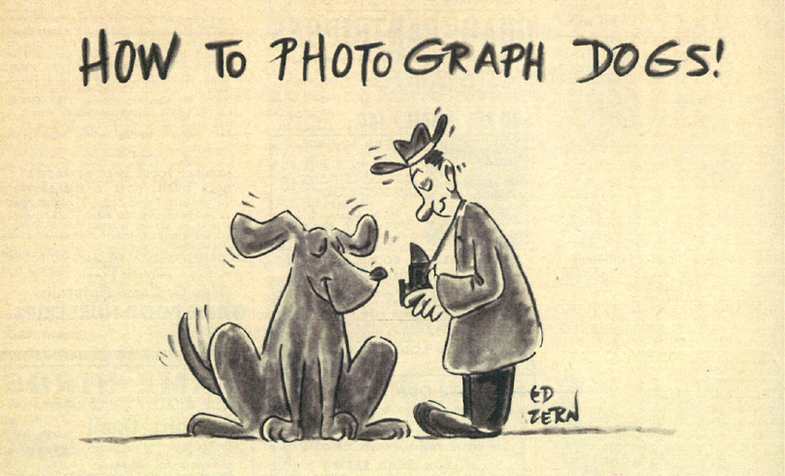 How to Photograph Dogs
No question about it, Ed Zern walked to the beat of a different drummer, and his penultimate creation, Orville Dykenfoos, was, in many ways, an entirely appropriate alter ego. For Zern inhabited an alternate universe, one filled with out-of-kilter hunting and fishing yarns, obscure literary references, elaborate puns, and the doings of an inexhaustible supply of bemused friends. Beginning in 1958, Exit Laughing anchored the last page of Field & Stream, and it remained a staple of the magazine for nearly 35 years. Some columns would produce peals of laughter, others a wry smile; there were those, too, that produced letters from befuddled readers asking just what the hell was going on. The editors didn't always know, which was fine by Zern. This particular Exit Laughing, which appeared in December 1959, will give readers a peek into Zern's fertile mind. And he came up with this stuff every month! Click here to read the story.
SHARE

At the last meeting of the Madison Avenue Rod, Gun, Labrador Retriever and Bloody Mary Benevolent Association one of the members complained that he had just got back the day before from a north woods hunting trip and that, as always on returning from a stay in wilderness country, he had been unable to sleep because of the night noises of the city. This reminded me of the time a few years ago when I was staying at Dana McNally’s fishing camp on Fourth Musquacook Lake in northern Maine, trying to coax some of those monster Barrel Hole squaretails to chew on a homemade Rat-Face MacDougall, and Dan said he was about to fly his Piper float plane over to Long Pond where his 80-year-old father, the legendary Willy McNally, was supervising construction of a new camp.

When Dana asked if I cared to go along I said yes indeed, and off we flew. When we’d landed (if that’s the word) on the lake, taxied a quarter mile up the Chemquasabamticook Stream to the new clearing, and beached the airplane on a sandy bank, we went ashore and found Willy McNally. He looked to be a well-preserved 60 or 65, pointed out without eyeglasses a deer I could barely see with my binoculars, and had a wit as sharp as his eyesight.

After he’d ushered us into the new cabin and sat us down before the fireplace, he asked if I was from New York. “Yes, sir,” I said, and asked him if he’d ever been there. “Once,” he said. “Did you stay long?” I asked. “No, sir,” he said. “Did you like it?” I asked. “I did not,” he said emphatically. “What didn’t you like about New York?” I asked. “Oh, various things,” he said, “but mostly it was the noise. My hotel room was on the third floor, and traffic was something terrible outside my window. I couldn’t sleep a wink.”

“It’s pretty bad, all right,” I agreed. “Bad?” he snorted. “It’s ungodly awful! All night long that clop, clop, clop!” I thought about this awhile and then said, “Exactly when were you in New York?” “Well, sir,” said Willy, “it must have been about 1908 or thereabouts. I suppose it’s changed some.” I agreed it had, and said new buildings were going up faster than a man could keep track of them. “Shucks,” said Willy, “we’ve got some new buildings too, right here.” He said he had run a trapline along the Chemquasabamticook when he was 17 years old, and had thought then that it would be a good place to build a cabin.

“And now I’m 80 years old, and we’re building it,” he said. “I’ve never been one for rushing into a thing without first thinking it over.” We agreed this was a wise attitude, and after Willy had told me about his hide-bound hog, that didn’t grow or gain weight until he’d rubbed it all over with neat’s-foot oil, Dana and I crawled back into the Piper and flew back to camp.

And when I told one of the members about sharing my not-very-spacious bunk at a duck camp with my two large Labrador retrievers the previous weekend, it reminded him of an experience with dogs. He said he used to work for an advertising agency, one of whose clients was an electrical appliance company that was introducing the first electric blanket. Someone at the agency had decided the best way to do this was with a humorous touch, and so a series of ads was scheduled, each one to show some farfetched and funny way to keep warm, and then of course to point out the advantages of electric blankets.

One of the ads was to be illustrated with a color photograph of a man in a bed, with two dozen dogs sleeping on the same bed, presumably at his invitation to keep him warm. There were to be all sorts of dogs–a Saint Bernard, a dachshund, a Peke, a great Dane, a collie, a boxer, a setter, a toy poodle, a Chihuahua, a springer spaniel, a Dalmatian, a Labrador retriever, an English bulldog, an Afghan, a basset hound and a dozen or so other makes and models–and he was given the job of rounding up the dogs and helping the photographer make the picture. Some people at the American Kennel Club helped him locate two dozen assorted dogs, and he arranged to have them brought individually from their homes or kennels to the photographer’s studio, on an upper floor at Rockefeller Center, one day at 10 a.m.

The photographer, a timid man, set up a bed in the studio and arranged for a human model, but was scared to death of dogs and said so. My friend, who fancied himself a pretty fair dog handler, assured him there’d be no trouble. There wasn’t, either, until he tried to get the dogs onto the bed at which juncture, he said, the damnedest dogfight anybody ever saw erupted like a volcano.

“If you’ve never seen two dozen different breeds of dogs, from a pound to a hundred and fifty pounds, all in one dogfight, you wouldn’t believe anything could make such a loud, bloodcurdling noise,” he said. “The photographer climbed up on a table and hollered bloody murder, while I tried to break up the fight and finally did. I realized then that I needed some help, and telephoned a vet–fortunately there was one nearby, and he came right over. He gave each dog a pill of some kind, said in five minutes it would calm them down enough to prevent fighting and make them drowsy enough to stay on the bed, and left.

“I waited five minutes,” he said, “and then let all the dogs loose again. Whereupon the fight broke out again, louder and bloodier than ever, and I sent the photographer to call the vet again while I tried to beat the dogs apart with my briefcase. When the vet got back he said the pills must have been old and weak, and rammed another one down each dog’s throat. He wasn’t able to stay, but assured me there’d be no more fighting. No sooner had he left than the boxer lunged for the poodle, the Pekinese clamped down on the Chihuahua and the whole thing exploded again into a mass of snarling, snapping dogs.

“At this point,” he said, “the photographer threw up his hands, said enough was enough, and ordered us out of the studio. A couple of other people showed up from my office just then, as I’d put a call in for reinforcements, but although they tried to argue the photographer into changing his mind it was no go, and so we herded the dogs out of the studio to the elevators. By this time it was just about the lunch hour, and the elevator service was slow, and by the time one stopped for us I’d noticed that several of the dogs were looking dopey. Before we could get them into the elevator five or six of them had keeled over, sound asleep, and by the time we got them all into the car and down thirty-odd floors to the street level every last one of them was out like a light.

“So there we were,” he said, “with twenty-four passed out pooches on our hands, in the lobby of the world’s biggest, busiest office building at the height of the lunch hour. We divided them into three equal lots, and each of us carried eight dogs across the lobby and out to a taxi at the curb–the Saint Bernard and the other big dogs one at a time and the small stuff two or three at a time. We stacked them like cordwood in the back seat, and I spent the rest of the day delivering unconscious dogs to their owners and explaining, as best I could, how they got that way. None of the owners seemed to mind that someone had slipped his mutt a mickey, and one asked if I knew where he could get a batch of those pills. And I tell you this because, although I’ve never shared a small bunk with two large Labs, the chances are you’ve never ridden around New York City in a cab with two dozen kayoed canines.”

I admitted I hadn’t and felt pretty sheepish about it, until it occurred to me that on the other hand this guy probably wouldn’t know the proper treatment for a hide-bound hog.