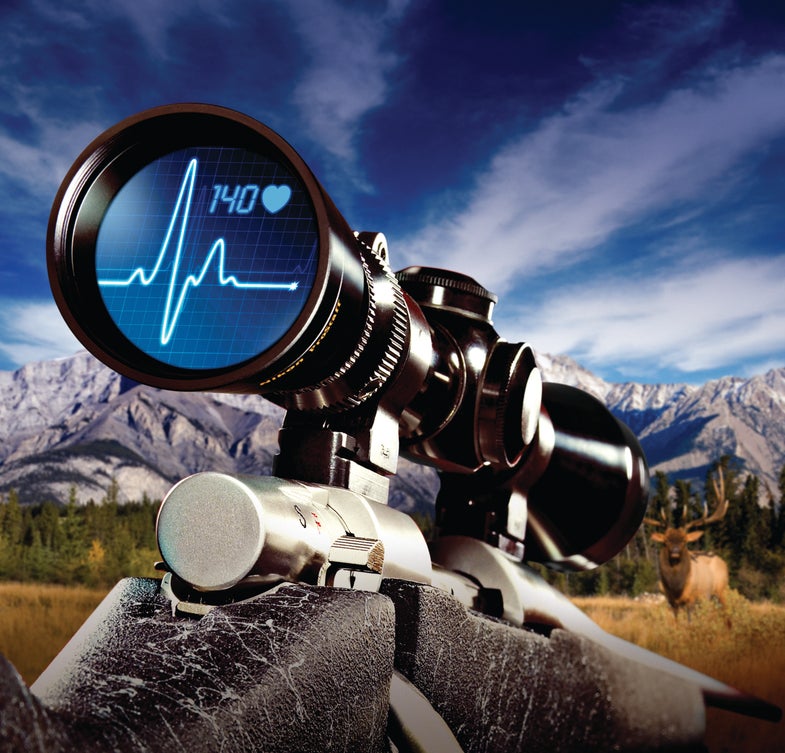 WHEN YOU ARE HUNTING ELK, the hammering of your heart is most noticeable in the silence before dawn, when you stop for a breather on the mountain. It is a sound I have heard since I was a boy, but not until last season, when I strapped on a heart monitor, have I ever bothered to count the beats or take measure of their meaning.

Although opinion varies, many doctors caution that exercising at a level higher than 85 percent of a person’s maximum heart rate increases the risk of heart attack. For men, maximum heart rate is calculated by subtracting your age from 220. For me, the equation reads 220 – 56 = 164. Eighty-five percent—my red-flag number—is 139. Throughout big-game season, I found myself battling to keep my heart rate in the safe zone, especially while hunting elk. Oct. 25 was a typical logbook entry. Fifteen minutes after starting up the west face of Garnet Mountain, I had already exceeded my 85 percent maximum by eight heartbeats.

The Killing Season The elevated heart rate came as a surprise to me—I attained a season high of 168 while pulling an antelope on a game cart that had two flat tires—but it echoed the results of a study conducted by Michigan’s Beaumont Hospital. Published in 2007 in the American Journal of Cardiology, the study involved fitting heart monitors on 25 middle-aged hunters, 17 of whom had been diagnosed with coronary artery disease. During deer season, all but three exceeded the maximum rate they had achieved on a treadmill test. Dragging downed game raised heart rates to the most dangerous levels, but several men experienced jumps into the red zone simply from spotting or shooting at a deer

According to coauthor Dr. Barry Franklin, the strain hunting puts on your heart muscle can be attributed to three factors: hunting’s strenuous nature, the epinephrine (or “excitement”) response upon seeing game, and environmental stresses including cold weather and altitude.

“It’s a perfect storm,” he says. “Each year I read about hunters having heart
attacks upstate. Most could be prevented.”

Franklin also notes that many hunters in the study group exhibited life-threatening heart-rhythm irregularities that had not been apparent on EKG readouts during laboratory
treadmill tests. This was a disturbing finding, for heart arrhythmia is the trigger for cardiac arrest, in which the heart suddenly stops beating.

Pump Protection So what can you do to keep your heart working during the R months?
First, get a stress test. Treadmills and EKG monitors can reveal arrhythmias and arterial blockages that put you at risk for heart attack. If you are diagnosed with heart disease, your doctor may prescribe nitroglycerin tablets, which dilate blood vessels that may be constricted. A pacemaker that detects irregular heartbeat and shocks the heart back into rhythm may be an option for patients at high risk. Always carry an uncoated aspirin tablet in a pocket. Chew and swallow it to thin your blood at the onset of chest pain.

Once you have the green light from your doctor, buy a monitor (many include alarms that can be set to your maximum safe rate) and embark upon an exercise program. Aerobic exercise that keeps your heart working between 65 and 85 percent of your calculated maximum (the fitter you are, the harder you can work your heart) increases the capacity of the muscle to pump the blood and oxygen needed for the rigors of hunting, while reducing the chance of dangerous jumps in pulse rate. Exercise in the target zone for 20 minutes at least three times a week. I have yet to figure out how to keep the digital readout in the safe zone while backpacking 60 pounds of elk meat up a mountainside, but during most of my hunts, staying under the maximum was basically a matter of taking more climbing breaks and trying to avoid dragging a downed animal by myself. Hauling game is what horses and game carts are for. Just make sure you pack spare tires.