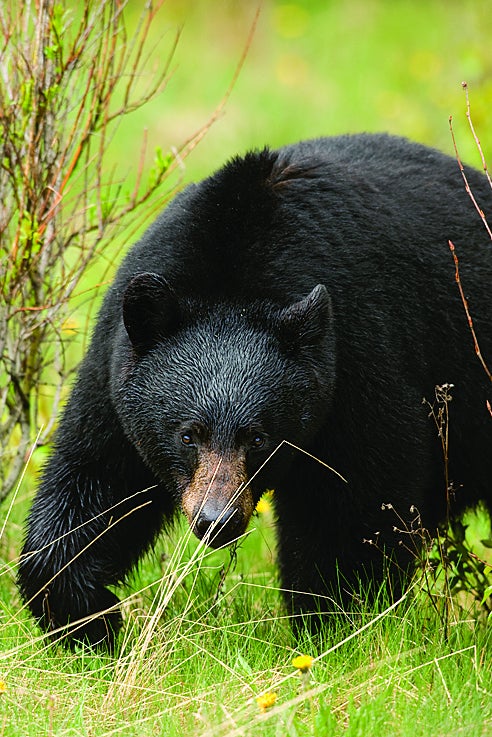 A group of my friends wanted to get their first bear, so I brought my Plott and Walker hounds to help. When they opened up and started running, I knew they sniffed something big.

We caught up with them 30 minutes later under a pin oak, where they were barking up three bears. My knees give me trouble, and I needed a rest. I knew that you shouldn’t ever get under a treed bear, so I walked to an old deer trail that I thought was a safe distance from the action. Meanwhile, my friend shot and hit one of the bears. After another shot, the bear suddenly jumped from the tree, cleared my friends, and bounded straight for me.

I tried to pull myself up from where I sat, but it was only a moment before he was 6 feet away and rearing up on his hind legs. I threw up my hands to protect my face, and the bear latched onto my arms with his teeth and claws. Then I heard a bang. My friend Charlie had shot the bear in the head.

What happened next is a blur. I remember blood running to the floor of my friend’s truck as he doubled the speed limit to the nearest Forest Service station. Next thing I knew I was in a helicopter, with tubes coming out of my arms. Then I fell into blackness.

I awoke two days later in the Sutter Roseville Medical Center. The doctor told me that if I had arrived one hour later, I would have died. I had lost 4 pints of blood. The bear, which weighed

almost 300 pounds, had broken my left arm in four places. Even after therapy, my left thumb is partially paralyzed and a shooting pain comes and goes. It’s a reminder of how powerful these animals are. I was done for the season, but I’m not done forever. I’m just going to watch where I sit.