Take Down 4 of the Toughest Late Season Toms

Only the smartest gobblers remain by late season. Learn their weak points and nail them where it hurts. 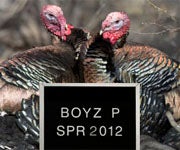 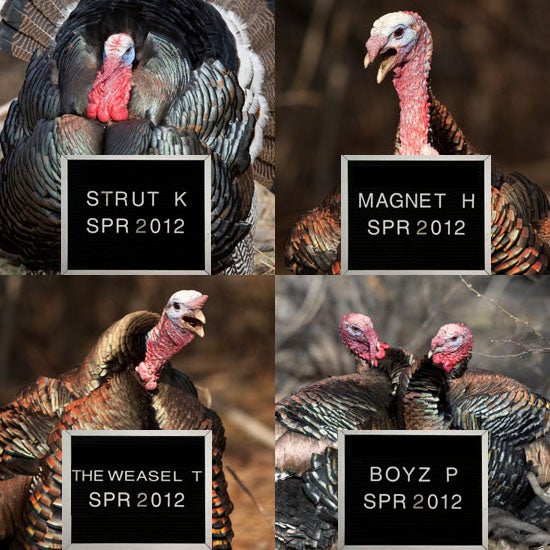 By late season, all the easy gobblers have taken a dirt nap. Only the toughest birds, the ones who make their reputations outwitting hunters like you, remain. But don’t give up the chase. Every tom, no matter how cagey, has his weak spot. Find it, and you’ll get your gobbler. Here are four characters you’re apt to encounter now–and how to deal with each.

Psychological Profile: King Strut is the classic alpha male. He isn’t necessarily the biggest bird around, but he thinks he is–and that’s what matters. He lives to assert his dominance. He’ll fight any tom, any time, and it’s this aggression that makes him the top bird. Within his territory, hens run to him and gobblers fear him. With his dominance well established at this point in the season, he doesn’t have to fight much. But if a strange gobbler shows up, look out.

Modus Operandi: King Strut plays it cool, because he can. Every bird in the flock recognizes his voice when he sounds off from the morning roost, and hens that are ready to breed fly to the base of his tree. After his morning romance, the King heads to a favorite strutting area, where he simply gobbles, parades, and waits for another hen to appear.

The Plan: Forget the normal seductions. This bird does not chase yelps and won’t give ground to a hen decoy. No, the key to killing the King is to challenge his dominance. His aggressive posturing and body language keep local gobblers in check. To trip his trigger, you need to show him a strange “tom” that won’t back down.

The Setup: First, locate his favorite midmorning strutting area. If you’ve been hunting him unsuccessfully, you may already know where this is. Otherwise, spend a morning glassing and listening; if necessary move in to scout for drag marks on logging roads or open ridges. Next morning, get to that spot early and stake out a full-strut gobbler decoy. Your fake should sport a full fan and a long beard and be facing your quarry’s anticipated approach. After his morning rendezvous with hens, the King will show up, take the decoy’s in-your-face posture for aggression, and barge in for a fight.

Best Calls: The King may gobble at your hen calls, but they won’t bring him in. What will is a gobble tube. Use it only enough to get his attention. Once he spots your strutter decoy, put the call down and get your gun up.

Psychological Profile: Mature and full-fanned, this bird has a beard that brushes the ground and long, -needle-​sharp spurs. But it’s all for show. He’s a lover, not a fighter. Hen Magnet is physically capable of being the top tom, but he just doesn’t have it in him to do battle. That, or he has figured out that he simply doesn’t have to. By ingratiating himself to King Strut–a sort of sidekick, if you will–Hen Magnet has put himself in the perfect position to service hens his boss doesn’t get to. If you’re an elk hunter, you’ll recognize him as a “satellite” gobbler.

Modus Operandi: Not wanting to ruffle the King’s feathers, Hen Magnet does not sound off nearly as much as his boss, and when he does he makes a short, high-pitched gobble. His game plan is to hang back while the King’s throaty gobble pulls in hens. Only then does he look for his opportunity to sneak off with a mate.

The Plan: The secret to tagging Hen Magnet is to play to his ego. He’ll be roosted fairly close to the boss bird. Listen closely in the early morning and you’ll notice that when the dominant tom gobbles, all the hens answer him. When Hen Magnet gobbles, nothing. This is your opportunity. You need to jump in and make him believe you’re the one hen who thinks he is the real stud of the neighborhood.

T****he Setup: Wait for the birds to start talking at first light and ignore the one that’s gobbling the hardest. That’s the King. Hen Magnet will be squeaking out one gobble to the boss man’s five. Set up tight to the quieter turkey so he doesn’t have far to travel to find you, and stake out a single hen decoy to pique his interest.

Best Calls: Don’t make a peep in response to the boss’s frequent gobbling. Wait for Hen Magnet to sound off, then climb all over it with aggressive yelps and cutts. When he makes that first gobble after his feet hit the ground, cut him off with more excited cutting. He’ll walk straight to you.

Psychological Profile: Neither of these buddy birds does anything without the other; they are a pair, for sure, and maybe a couple. It’s not entirely clear why they pal around. Such an alliance clearly has practical advantages, including strength of numbers in a fight (or avoiding one) and two sets of eyes and ears to detect danger. The fact that they seem to show little romantic interest in hens, however, may suggest a different kind of partnership. In any case, neither knows who is in charge from minute to minute, which makes them maddening to hunt.

Modus Operandi: These guys will quickly respond to your hen and locator calls from sunup to sundown–but they’ll rarely take a step toward you. Weird around aggressive hens and skittish about other gobblers, they’ve got their own agenda, which seems to be about covering as much ground as possible in a day, and gobbling as they go.

The Plan: Conventional tactics won’t fool Tom or Tommy, but they’re still turkeys: They roost, eat, travel, and socialize with other birds within a fairly predictable home range. The trick is to pattern them. Listen to their frequent gobbling to learn their favorite hangouts and the routes they follow between them. Then plan an ambush. It’s not a glamorous tactic, but it’s the best way to tag a buddy bird.

The Setup: Place two or three feeding hen decoys–no gobblers or jakes–in one of the Boyz’ favorite feeding -areas or loafing spots, or in a funnel along a travel route. Then erect a pop-up ground blind nearby, get comfortable, and settle in for a potentially long wait.

Best Calls: Don’t let your boredom lead to overcalling. Aggressive yelps or cutting can freak these birds out, and gobbling could flat ruin your hunt. Instead, take a softwood striker to a mellow slate to make contented clucks and purrs. You’re not trying to call them in so much as trying to convince them the world is O.K.

YOUR QUARRY: Tommy the Weasel

Psychological Profile: In any group, certain individuals will be weaker than others. In Tommy the Weasel’s flock, he is the weakest adult male–a fact that has been exploited by other gobblers at every opportunity, reinforcing his submissiveness. Whenever Tommy has taken a step toward a hen yelp while in sight of other toms, he’s gotten his clock cleaned. So he doesn’t do it anymore. He has learned, above all else, to avoid a fight. He sneaks around. He meets hens on the sly. He gets by on guile. And that makes him one tough bird to tag.

Modus Operandi: Tommy gobbles like mad from the roost (where no one can hurt him), but he shuts up the second his toes hit the dirt. He only occasionally answers a hen call, and when he does, you can bet he isn’t going to come running. Far more often, he hangs up out of gun range and then slowly fades away from your setup.

The Plan: A tom that won’t answer a challenge and rarely comes to a call may seem nearly impossible to kill, but there’s a chink in Tommy’s armor: all that gobbling he does on the limb. He’ll start yodeling as soon as he flies up in the evening. Be there to put him to bed and pinpoint his roost. Then return early the next morning to convince him he can nab a hen before any other gobblers are wise to him.

The Setup: Well before dawn, wiggle in as tight to his roost as you can, and set up one hen decoy. Use an owl or crow call to pull an early gobble from Tommy. If you’re within 100 yards, great. If not, slip closer and quietly set up again.

Best Calls: Let Tommy talk his head off from the limb. If you don’t hear any other turkeys nearby, give him a few soft tree yelps just to let him know where you are. Otherwise, stay quiet until Tommy’s feet hit the ground. Then start sweet-talking him with contented clucks and purrs. Tommy is going to sneak in silently. So sit still, keep your eyes peeled, and be ready to shoot.