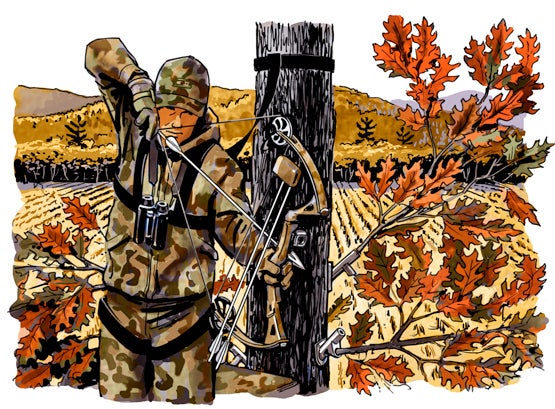 You’ve found the almost-perfect stand tree. It’s ideally positioned for the prevailing wind. It offers good shooting to several trails. But there’s a problem: It’s got no cover. Or it has cover now but won’t as soon as the leaves drop. Either way, here are two simple, inexpensive ways to solve the problem.

Do this using flag brackets (about $6 each). Find an evergreen tree or deciduous species that holds its leaves late, like oak or beech, and cut a few limbs to a diameter that will fit into the brackets. Hang your stand. With a cordless drill and a handful of screws (and permission), install the brackets to the sides and behind your perch. Pull the branches up with a rope and install. Done.

If your tree already has limbs but they’ve lost their leaves, use the existing branches as a framework to add foliage with a handful of zip ties. Again, cut several pine, cedar, oak, or beech branches. Haul them up and simply cinch down some zip ties to hold them in place. If necessary, the added branches can be removed at season’s end—after you’ve tagged that wary buck.