Close Call: Surviving a 600-ft Fall Down a Mountain

Sam Euker, 25, was elk hunting near Dillon, Mont., last October when he lost his footing and tumbled 600 feet... 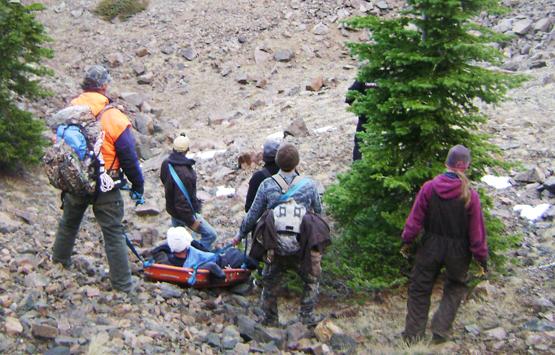 Sam Euker, 25, was elk hunting near Dillon, Mont., last October when he lost his footing and tumbled 600 feet down the side of a mountain. He tells the story here.

It was the first day of the Montana elk season. My friend Paul Lacey and I hiked 5 miles together before lunch, then decided to split up. I dropped down into the valley, where I’d heard bugling earlier, and was rewarded with a shot at a big bull around 2 p.m. I circled down the ridge and found my 5-pointer on a steep slope—it was a tough spot to dress him out, so it was two hours before I tied the antlers to my pack and set off to find Paul.

By then, I was worn out and thirsty, having drunk my two bottles of water earlier in the day. But I was eager to tell Paul about my elk and made a plan to march straight up the slope, rather than follow the long looping path I’d taken down.

I started strong but then I began to feel dizzy. I stopped every five minutes to catch my breath. I was close to the top of the ridge when I stepped on a large rock and slipped. I fell onto my stomach and started rolling fast over loose rocks and boulders toward a 10-foot drop. I tried to slow myself down before I flew off, hit the ground, and blacked out. When I came to, my body was still tumbling downhill. The last thing I saw before I blacked out again was my rifle flying through the air above me.

I came to about 20 yards away from my elk. I tried to stand up and knew instantly that my ankle was broken. I felt blood running down my face and neck. I was in pretty big trouble. Somehow, I’d lost or broken everything but my cellphone—and I had service. I called Paul, who was at my side in 15 minutes. He freaked out when he saw that parts of my skull were exposed, but quickly called 911 and built a fire.

At 2 a.m., the local search-and-rescue squad found us. They put me in a sleeping bag and bandaged my head and ankle. At first light, they moved me to level ground, and a few hours later a helicopter flew me to Idaho Falls for treatment.

My stitches have healed, but rehabbing my ankle has been a long process. I never should have attempted that climb. I could have easily gone the long way and would have been in no danger. —As told to Jed Portman

From the August 2012 issue of Field & Stream