Heavey: The Importance of Having the Right Shoes

by Bill Heavey If you love the outdoors but have finite funds, non-outdoors expenditures are painful things. In my case,... 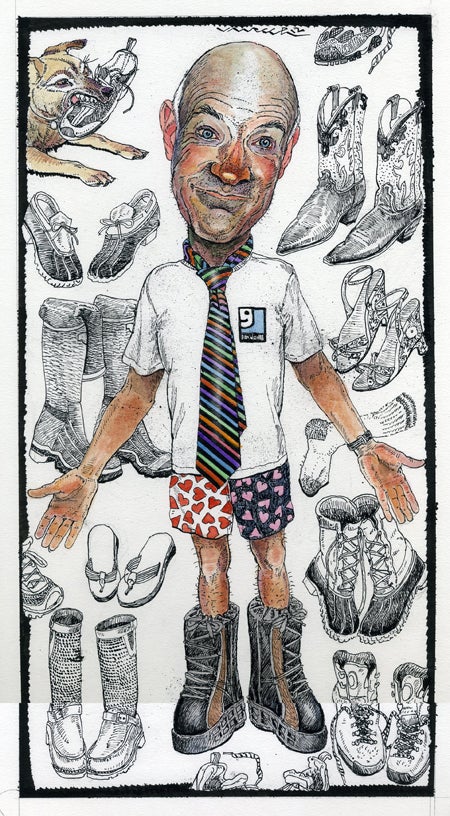 If you love the outdoors but have finite funds, non-outdoors expenditures are painful things. In my case, no pain compares to that of opening my wallet to acquire so-called dress clothing, which serves no purpose other than to make you look “nice.” And the more such an item costs, the sooner it dies.

Inadvertently but irreparably, I will either rip it, burn it, stain it, or catch it in a reciprocating saw. There are fruit flies that have lived longer than some of my ties. My personal record is 45 minutes.

That tie never made it out of the box. In brief, I drove to a shopping mall (first mistake), bought a tie (second mistake), and then sought to dull the pain of shopping with Chinese takeout (third mistake). Both the tie and the food appeared to be carefully sealed. There is no such thing as a carefully sealed carton of Chinese food. (Incidentally, should you ever need a dress shirt on short notice and find yourself unable or unwilling to iron one, head for the nearest Goodwill. There, a crisp dress shirt goes for $5.98. A shirt like that, inexplicably, not only lasts forever but will also shatter the blade of any reciprocating saw.)

It is, of course, never painful to purchase outdoor gear, especially if you actually need it. This is doubly true for a vitally important but oft-overlooked type of equipment. I speak of outdoor boots and shoes. I have had feet all my life and what it has taught me is this: An outdoorsman cannot be happy unless his feet are happy. What your feet want at any given moment is comfortable footwear adequate to the task. For me, that works out to about 24 pairs of boots and shoes. More or less. O.K., I know that sounds like a lot. But it includes a fair number of outliers, boots for applications so specific they may never be needed again. There was, for example, a trip to Alaska in January that included travel on unheated aircraft.

For that I got a pair of Mountain Pack boots by Northern Outfitters, makers of clothing favored by polar research scientists. The boots cost $185, weighed 13 pounds, and made me look like I was wearing inflatable apartment buildings on my feet. The open-cell insulation responsible for their appearance works in part by venting moisture as water vapor. What this meant was that on a 30-below morning, I could look down at little wisps of white smoke coming out of the apartment buildings. I cannot convey how satisfying it was to watch this with warm, dry feet. The boots would probably fail in environments where H2O exists in a liquid state, but at that time and place they were worth every penny.

Once, for a gobbler hunt in southern Mississippi, I read up on the area’s snakes too diligently. Eastern diamondbacks, our biggest and most dangerous, are found there. According to Wikipedia, this rattler has “a very high venom yield: an average of 400-450 mg, with a maximum of 858-1,000 mg.” A bit further on, I learned that “the estimated human lethal dose is 100-150 mg.” In other words, a good bite could kill you eight times. It causes internal bleeding and makes your red blood cells pop like balloons. Hallucinations, bleeding from the mouth, nausea, and vomiting are not uncommon. Also, you don’t feel very chipper. Rationally, I knew that 99.9 percent of venomous-snakebite victims in the U.S. survive. But my upper brain was no longer calling the shots. I got the tallest snake boots available, a pair of 18-inch Chippewas. On the three-day hunt, I saw neither turkey nor serpent. I did, however, discover why 18-inch boots are rare: You can’t bend your knees in them. You walk out of the swamp like Frankenstein with a box call.

I’ve gotten to the point that I now require outdoor-capable shoes to attend parties. My cocktail patter is thin at best. When it deserts me entirely, I head for the backyard beer tap, usually discover a deer trail, and take off. The next thing I know, two hours have passed, and being undergunned in the shoe department, I return encrusted with mud from having fallen. Five years ago, after several false starts, I found the unmarked car of shoes: dressy enough to get you in the door, sturdy enough for bushwhacking. They are heavy, brown leather oxfords by Irish Setter. You get a round toe and four brass eyelets.

They have an unfortunately fancy name–1884 Countrysider Waterproof Oxfords–but that’s the world we live in. The thick leather takes a shine. Under the hood, you get a steel shank, hiking-boot soles, and a Goodyear welt (which enhances airflow through the shoe but keeps it waterproof.) Mine cost $150. That’s a bundle. But the feeling of walking into a party and knowing you can leave by whatever route you choose? Even I can’t put a price on that.