How to Throw the Best Dove Hunting Party

Getting an invitation to a big dove shoot is a lot like being asked to the homecoming dance. Every August,... 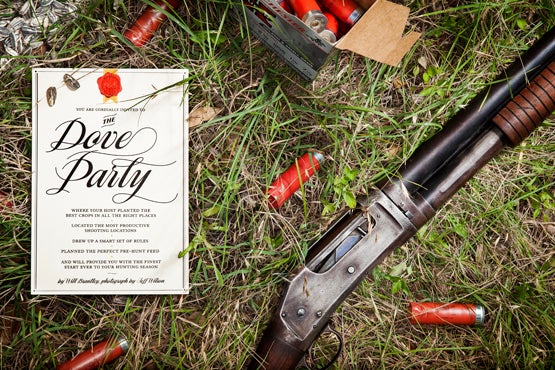 Getting an invitation to a big dove shoot is a lot like being asked to the homecoming dance. Every August, hunters across the South find themselves in the homely girl’s shoes, pining away next to the telephone and hoping it’ll ring.

But when it’s your dove field and you control the guest list, you’ll be in the king’s shoes. You’ll have an abundance of friends, new and old. Bottles of bourbon may show up on your doorstep.

Increasingly, though, the dove tradition is moving beyond its Southern roots. More hunters across the country, particularly in the Midwest, are breaking ground in spring in anticipation of a good shoot come fall. Preparing for a shoot involves more than planting a field of sunflowers. In fact, it’s a daunting undertaking. But that makes the rewards even more satisfying, because a good dove shoot is never forgotten.
Planning the Party

Pick the Ideal Field
Beyond tillable ground, you need to choose a field that’s attractive to doves. “Your field needs to be close to a roosting site,” says Ben Richardson, the former land manager for Pursell Farms in Alabama, who has planned a dozen or more large-scale dove shoots. “There needs to be a decent scope of trees within a quarter mile. That’s rarely a problem in Alabama, but in vast cropland in the Midwest, it’s something to consider.”

The birds need to drink and pick grit as well, so if there’s a gravel road and a shallow pond with an open bank nearby, it sweetens the pot.

“Doves love to sit on power lines, too,” Richardson says. “We’ve even stretched 1,500 feet of fake power line across some of our fields, and it really helps. Counting them up there is a great way to know how many birds are using your field, too.” **

Plant the Right Crops**
Doves relish small grains and seeds. Sunflowers are the classic choice for a dove field, but unless you drill the seeds when planting, crows and other birds can wipe them out long before they germinate. Richardson prefers a mixture of browntop millet and grain sorghum.

“The best fields I’ve planted are 15 acres, but they’re long and slender, running right down a power line,” he says. “We disk up two rows 12 feet wide, one on each side of the line, then parallel to those disked rows, we plant strips of grain sorghum, also 12 feet wide.”

The grain sorghum doesn’t mature for the birds to eat during the early September season, but it does serve as a great place to hide hunters. Richardson says it can provide outstanding shooting later in the season, too, once it matures.

Parallel to the sorghum strips are strips of the browntop millet, and Richardson says it’s best to plant these so that various sections will mature over the course of a month and hold birds in the area for the duration. Finally, as it gets close to hunting season, wheat is sown on the disked strips.

“It’s incredibly important to work with the game warden in your area and to check the dates and the legal amounts of wheat you’re allowed to sow in a dove field,” Richardson says.

“Everything you do must be a standard farming practice. If it’s not–like if you’ve got more than the recommended amount of wheat on the ground–it can be considered baiting, and everyone on the field can get a ticket.”
**
Time the Hunt**
Sept. 1 is the traditional opener in most states, and no doubt the most popular of all days for holding a dove shoot. That doesn’t mean it’s always the best day to kill doves, however. Doves are migratory, and it doesn’t take much of an early cold front to move big numbers of birds in–or out–of a field. Like any hunting worth doing, scouting is the key. If your field is loaded with birds on Aug. 28 and the forecast is stable, plan the shoot. If a cold front will be blasting through, however, you might be better off to wait and let migrant birds behind the front establish themselves in your field.

When possible, Richardson likes to time his shoots the same day as others in the area. “If there’s another field 2 miles down the road with no hunters, all the birds will just pile into it once you start shooting. Gunfire in both fields keeps them flying.”

The Meal
All proper dove shoots are preceded by a big lunch, and if available, grilled dove breasts are a menu staple. Marinate the doves (bone-in adds flavor; boneless fillets are easier to manage) with Allegro Marinade, then season to taste with salt, pepper, garlic powder, and Cajun seasoning. Add a jalapeño slice and a small chunk of cheddar cheese, wrap with a half strip of thick bacon, and secure with toothpicks. Top the toothpick ends with onion slices and grill to medium-rare.

In the absence of dove breasts, a wild-game potluck meal is the traditional choice. Venison burgers, frog legs, bluegills–you name it. The meal is the time for visiting with friends, especially on opening day, when shooting hours often don’t begin until noon or later.

The Talk Stressing safe hunting practices to your buddies may seem tacky, but it only takes one low bird for someone to end up in the ER with a face full of 71⁄2s. The end of the meal will be the last time everyone’s together before heading to the field, and that’s the time to go over the rules. Don’t shoot low birds. No alcohol on the field. Keep the retrievers under control.

Positioning Hunters Though fathers and sons and some groups of buddies may choose to sit together, in general, allow at least 50 yards between each hunter (obviously, you’ll want to consider this before inviting shooters; an overcrowded field is dangerous).

Some sections of the field will no doubt be better than others, and you’ll have a good idea of where they are if you’ve done your scouting. Richardson likes to position kids near the power lines, since doves backpedal and hover over them just before landing, offering easier shots than birds screaming across. Isolated dead trees provide simi­lar opportunities. “It’s also a good idea to have some shooters set up near the roost trees,” Richardson says. “They may be 100 yards away from the food, but they’ll usually get plenty of shooting, and they keep the doves flying.”

Though a dove hunter doesn’t need a blind, some cover is essential. “That’s why we like planting sorghum, but we also place round bales of hay in the field,” Richardson says. “Those are especially good places for fathers and sons to set up, since they can sit on either side of the bale.”

It’s the host’s responsibility to keep tabs on the action. If one guy is in a hotspot and limits out, another hunter who isn’t seeing many doves should be moved in to take his place. “During a good shoot, you may be moving folks around all afternoon,” Richardson says. “That’s part of the fun.”

Dos and Don’ts Though some hosts never pick up a gun, there’s absolutely nothing wrong with taking a stand in a good area and shooting your limit of birds–it’s your field, after all. But you must keep your guests in mind. Make the rounds on an ATV a time or two during the day to make sure everyone has water to drink and plenty of shells. “Keep a first-aid kit handy, too,” Richardson says. “Someone getting cut on a pocketknife or something is inevitable when you have 50 shooters in the field.”

Beyond that, it’s the host’s job to enforce the rules. “I won’t kick someone off the field for shooting at a low bird the first time, but you can’t let it slide,” Richardson says. “You have to address it, and be firm, even if it’s a young shooter. Mistakes with a gun get people killed.”

Shooting hours typically end at sunset, and most of the time the host will call everyone off the field a half hour or more before that. If you want to shoot your field again, you must give the birds time to feed unharassed before they go to roost.

When the guns are cased, stories are being told, and the dove cleaning begins, a cold beer or two is perfectly acceptable. And be sure to toast yourself on a job well done.