What happens when a cultural hit turns kids into hunters and foragers? 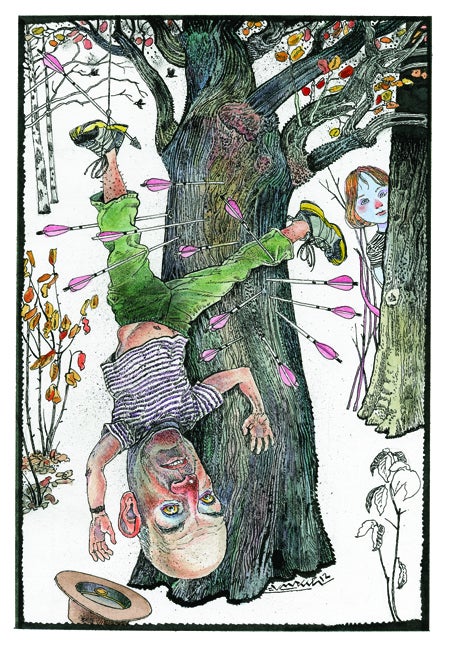 I never expected to find myself here. I’m standing in line at my local Dick’s buying a youth-model bow for my daughter. The woman behind me, noting my purchase, asked, “The Hunger Games?” Yep, I said and told her that I’d finally caved to Emma’s pleas and taken her to see the movie. And that immediately after, Emma had picked up the bow that had sat unused for two years and shot for 90 minutes. It was my 12-year-old’s longest sustained period of concentration since trick-or-treating back in October. And she kept at it. Within two months she had shot out the string. The woman’s two boys had also seen the movie. “They’re not all that into archery, but they’ve got snares all over the yard. I almost sprained my ankle in one.”

Is this a great country or what?

In case you’re not a parent, a tweenager, or really immature, you may not know that archery is having its Cultural Moment. Girls, especially, are taking up archery in record numbers. And suddenly it’s cool to hunt and eat wild game, learn about edible plants, and set snares for your mom. The juggernaut behind all of this is The Hunger Games, a bestselling book (the first of three) and now a blockbuster movie.

The story unfolds in a postapocalyptic future–apparently the only kind imaginable these days. North America is now Panem, a nation of 12 districts strictly ruled by a corrupt elite in the Capitol. To remind the populace who’s boss, the Capitol requires each district to select two children as “tributes” to compete in the annual Hunger Games, a fight-to-the-death competition on live national TV. Tributes kill one another with knives, spears, arrows, stones, their hands, poison berries, and genetically altered killer wasps. Think Winnie the Pooh meets Dawn of the Dead.

A story like this needs a different kind of heroine. It finds it in 16-year-old Katniss Everdeen, a tough, woods-savvy girl who hunts small game to feed her mother and sister. Leaving your district is a potential death sentence, but Katniss knows that the same people who could punish her are also her best customers, buying her squirrels and rabbits on the down-low. Katniss is known for delivering undamaged meat. She aims for the eye and rarely misses. When her younger sister is chosen as a tribute, Katniss volunteers to take her place. She survives the first day by climbing trees too slender to hold the big boys. And when she finally gets her hands on a bow, Katniss kicks butt. Even in the games, however, she only kills when there’s no other option. Along the way, we discover how a brave, compassionate girl with a moral compass can survive and–just maybe–prevail in a world where might makes right.

I have some minor issues with the author, Suzanne Collins. First, I totally resent her success. The book and movie are runaway hits. And Collins doesn’t know jack about the outdoors. We see Katniss gathering ripe blackberries and strawberries on the same day–which is fine except that strawberries ripen in May, blackberries in July. At one point, Katniss coats her lips with “grease” from a rabbit she killed, an animal whose meat has about as much grease as a carrot. While running flat out from a female tribute who is ­adept at throwing knives, Katniss narrates, “I keep moving, positioning the next arrow automatically, as only someone who has hunted for years can do.” Actually, I can’t remember when I last nocked an arrow while running.

Thing is, none of this matters because Collins’s story grabs you and won’t let go. Katniss is a different kind of hero. Her gender, for example, seems beside the point. She’s flawed, an outsider and loner who often can’t decipher her own emotions. But she’s scrappy, resourceful, and above all, cool. And I, for one, want my kid reading sentences like this: “The meat and plants from the woods combined with the exertion it took to get them have given me a healthier body than most of those I see around me.”

Last night, as I helped Emma lug the target back to the shed, she asked, “Daddy, I want to kill and eat a squirrel. How long till I’m ready?” This from a girl who three weeks ago informed me that she was now a vegetarian because “eating animals is cruel.” I put a hand on her shoulder and thought of how much she still has to learn, starting with the impossible task of sitting still for long periods. Then there’s hunter safety, the need to pull a heavier bow–it’s quite a list. I say none of this. I think of what Katniss would tell her.

“Well, it depends on you, monk,” I say. “How hard you’re willing to work at learning to hunt.” Emma’s face falls a little. It’s not what she wanted to hear. I’m disappointed, too. It’s not what I would have liked to say. As so often happens in life, the truth and immediate gratification don’t overlap. But I want Emma to learn that telling and facing the truth are the best ways to meet the challenges that await her. Which means that I have to model that behavior even if it stings. All in all, I think Katniss would approve.