You know the deal with September whitetails: Watch from afar, learn a buck’s bed-to-feed schedule, and strike only when conditions... 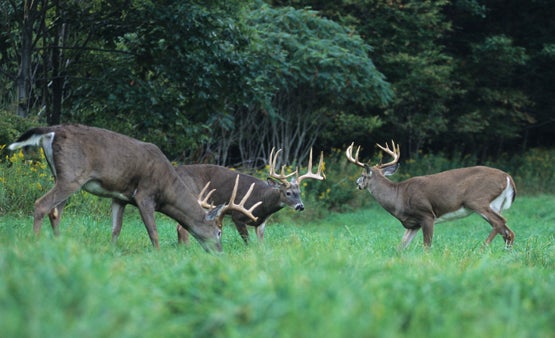 You know the deal with September whitetails: Watch from afar, learn a buck’s bed-to-feed schedule, and strike only when conditions turn perfect. Hunt the edges, don’t call, don’t spook him off that predictable pattern. You may know this because folks like me preach it every fall. That’s because it works; I’ve used it to arrow my share of bucks, including my biggest whitetail just two years ago. But sometimes, it is dead wrong.

Sure, bucks can be as predictable as dairy cows now. And as long as they stay on a certain routine, they’re vulnerable. But changing food sources, rising testosterone levels, and increased hunting pressure can quickly throw a buck off his late-summer pattern. When you see signs of this happening, you need to act fast and get aggressive. Here are four prime examples.

1. Bad Sign: Yellow leaves. Soybeans are a top early-season deer food in ag country. But when the leaves start to yellow, bucks will seek other foods fast. The same goes for alfalfa if the farmer takes a late crop or an early frost hits.

■ Bold Move: Pack a stand and hit the cropfield in the afternoon to pinpoint the remaining places where moisture, shade, or rich soil has kept plants green and thriving. Find the entry trails leading to the lushest growth and set up for an afternoon hunt. Pop up a blind in the middle of the field and stake a feeding buck decoy if that’s the site of the hotspot. Believe it or not, bucks will approach within bow range.

2. Bad Sign: Latecomers. When a buck that’s been hitting a field or plot well before dark suddenly starts showing up later and later, you can bet that the first available white-oak acorns or soft mast, such as persimmons or apples, are holding him up. You need to act fast before these snacks become the main course.

■ Bold Move: Again, pack a stand and head to your field-edge setup in the early afternoon. Starting there, slip carefully toward the bedding area, looking for partially eaten acorns or fruit, a rub near a cluster of white oaks, a scrape under an apple tree. Your buck is still hitting the field, so you don’t have to penetrate deep. Set up near the first good sign you see.

3. Bad Sign: Bachelor battles. Once velvet is gone, bachelor bucks that have been buds all summer start getting testy. Some serious fights can occur now, and when the new bosses are crowned, the group breaks up to establish individual core areas for fall. In short, when the bachelors you have pinned down start battling hard, you’d better get one killed quickly.

■ Bold Move: Capitalize on their aggression. Set up in your usual spot, but this time stake a buck decoy facing the bachelors’ typical entry trail. If necessary, grunt softly and tickle the rattling antlers to pull attention to your “intruder.”

4. Bad Sign: Pressure. Other bowhunters, small-game hunters, ginseng diggers, and hikers can alter your buck’s routine. Pay attention to any activity where you hunt. If a buck you think you have pegged stops showing up, this may be why.

■ Bold Move: It isn’t the firearms opener, so odds are he is on the same basic pattern but has made some subtle changes to feel safer, like moving later in the evening and shifting to sidehill trails or heavier cover. Set up off the food source overlooking covert travel routes. If that doesn’t work, try a morning hunt near his bedding area. Given the religiosity with which most ­conservative September hunters avoid buck lairs, he may never know what hit him.