How to Execute a Decoy Stalk on Rutting Antelope

A rutting buck antelope is ready to go to blows the moment another buck so much as looks at one... 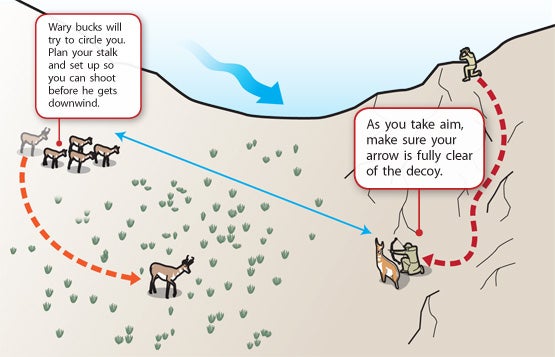 A rutting buck antelope is ready to go to blows the moment another buck so much as looks at one of the females in his harem. Luckily, that hubris can work in a bowhunter’s favor. Play into his jealousy by popping up a pronghorn decoy nearby, and the buck you’re after might close the distance from 300 yards to 30 faster than you can imagine. When he starts charging, you had better have an arrow nocked.

Find a Spot: Your first job is to locate a secure position. You’ll want to look for terrain with some contours—such as the down-sloping side of a hill or a coulee—that will allow you to get close without being seen. In my experience, an antelope buck responds to decoys best if you can get within 200 to 250 yards. Any farther and he’ll likely gather up his does and run. Get into that hot zone by crawling as close as possible. From this point on, things happen very quickly, so be ready to react.

Flash the Fake: While you’re still hidden in the coulee or behind brush, have an arrow nocked and range a few close clumps of brush or yucca plants so you have some reference points. Take one last deep breath and pop the decoy into position. Keep the lower third hidden from the buck’s view over the crest of the hill or in knee-high grass. You want to anger the buck, not intimidate him.

Draw and Shoot: You’ll know instantly if he’s going to choose fight or flight. If it’s the former, pick up your bow and clip in your release. As the buck gets close, come to your knees and draw in one smooth motion. When he stops, and he probably will, you have only a second or two to estimate the distance, settle the appropriate pin behind his shoulder, and squeeze the trigger.