The 10 Best Places to Hunt in the Most Miserable Conditions

Find out how to hunt in the toughest, but most rewarding locations. 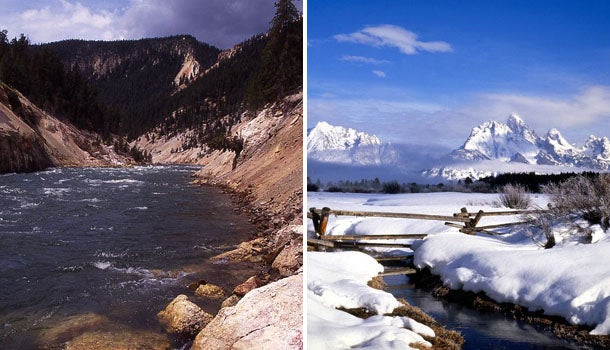 Good hunting and brutal weather go hand in hand, or rather glove in glove. W.L. Gore & Associates, the makers of waterproof/breathable hunting clothing, recently asked field testers, reps from hunting organizations, and members of the outdoor media to chose their best hunting/crappiest conditions destinations. They were to rate each on a scale of one to ten in several categories: quality and quantity of game, success rate, scenery, and hunter amenities. Being subjective, the results are debatable and that’s where you come in. Add your opinions to the discussion and share hunting horror stories of your own in the comments section below.

1. The Winner is: Kodiak Island, Alaska

This is a gimme. Sure, the hunting is fantastic–blackmail deer, mule deer, mountain goats, waterfowl and 3,000 of the biggest brown bears on Earth inhabit the mostly unroaded island–but 80 inches of rain falls each year, not to mention snow, sleet, and gale force winds that sweep in from the Japan Current. Heavy fog means that lump you thought was a rock wasn’t, and your bowhunt for blacktails has taken a swift turn into the unknown, as a thousand pounds of teeth-popping brown bear comes alive in your face. The upside? You haven’t lived until you’ve been bluff-charged (hopefully) by the most powerful predator on Earth.

Gear Tip: Bear spray!
Skill Tip: Not peeing your pants, which, by the way, should be waterproof, resistant to tears, and breathable. Hip boots or waist-high waders under rain parkas are not overkill here.

Bad weather and good gunning goes without saying, but horrible weather and great gunning is the hallmark of a waterfowl hunt in Penobscot Bay. Morning hunts for winter resident sea ducks–eiders, old squaws, and scoter–is followed by afternoon shooting for puddlers; that is, if the wind hasn’t kicked up to 50 per and your guide says it’s too dangerous to attempt a boat crossing back to the mainland. Cons? This isn’t a do-it-yourself hunting unless you’ve bought into the idea that death by drowning is a peaceful way to go. Pro’s? Lobster is $4 a pound!

Gear Tip: Sea ducks are tough. A seaworthy 12-gauge 3-inch is the ticket.
Skill Tip: Bring a cleaning kit and know how to keep rust at bay.

Having hunted elk near my home in southern Montana for more than 30 years and from 80 above to 43 below without wind chill, in a wind, I can sum up hunting here in a word: unpredictable. That is, except for the quality of the hunting, which is uniformly great, usually hard and invariably better the farther you go back. Elk are the marquee attraction, but goats, bighorn, moose, antelope, mule deer, whitetails, black bear and cougar, not to mention upland birds and waterfowl, live here or pass through in abundance. Wolves are part of the landscape now, and a great game animal in their own right. Downside? With so much opportunity, regulations pamphlets are dense enough to give you a headache, and with B tags, bonus points and online applications, you have to do a lot of hunting with your fingertips before trading the ether space for the open skies.

Gear Tip: This is the country of the unexpected night. Bring a flashlight and a folding saw to makeshift a shelter in the storm.
Skill Tip: Learn how to make a fire!

The problem with wide open country in northern latitudes is a snowstorm anywhere else becomes a blizzard when it sweeps in from the plains. Big swings in temperature are the rule. But it’s great turkey hunting in the spring and great deer and elk hunting in the fall, and bighorn sheep for those gambling men who’ve sold their souls to win the lottery. They many not make it to heaven, but then perhaps they’ve found it on Earth.

Gear Tip: Dress in a layering system for everything from freezing to scorching weather.
Skill Tip: It can be confusing country. Learn how to use your GPS.

With the exception of the Bob Marshall Wilderness, which is as far from civilization as any region in the lower 48, access is a little better here than in much of the state, thanks to spider veins of logging roads. It’s awful rugged country though, without a lot of open parks to get a vantage; if you get lost here, you’re really in trouble, not to mention an unarmed human is far from the top of the food chain. The plus side? It isn’t as crowded as the more famous country to the south. Elk, deer and rest of the usual suspects get the most attention, but this is where I travel to hunt turkeys. You just have to swivel your head around now and then to make sure you aren’t calling in a mountain lion!

Gear Tip: A four-wheel drive with good clearance is a necessity.
Skill Tip: Learn to read a grizzly or cougar’s mood by the position of its ears. Just kidding, I think.

Home to the country’s largest elk herd, Colorado is also the only state where non-residents can buy an elk tag over the counter. The trade-off? Shorter seasons, smaller bulls, and more hunting pressure. That is unless you get away from the crowd, which means you have to climb. This is the only place where you’ll hunt elk at elevations higher than the goat country in the rest of the West. Be prepared for extremes, including weather and especially lightning. The scenery is breathtaking.

Gear Tip: Do your homework. There are a lot of good bulls here; knowing where to hunt is key.
Skill Tip: Computer skills can make the difference between a freezer of venison of going home elkless.

Hunting Roosevelt elk, blacktail deer and bear in the Twilight country of Washington’s Olympic Peninsula is unlike hunting anything anywhere else. Well, except for the rest of the coastal rainforests of Washington and Oregon (how the much drier Cascades slipped into the region is baffling; it’s apples and oranges). My first elk hunt was on the Peninsula and lasted an hour, or about 45 minutes after I was soaked to the bone. It wasn’t just the rain that drove me home, but the feeling of being trapped in a primeval forest that creatures beyond the realm call home. The vampires of the Twilight saga are a recent addition. They say the guides are good here; you might consider hiring one.

Gear Tip: With raingear you can go two ways: breathable or non-porous. You’ll eventually get wet wearing either one, so bring backups. Silver bullets for the blood suckers are optional.
Skill Tip: Fogged optics do not a punched game tag make. Learn how to shoot open sights.

Big woods, big deer, and bad weather–what more could you ask for? Deep snow? Consider it a promise. The best hunting is during cold snaps. If it’s whitetail you’re after, you’ll be spending most of your time sitting on the stand and feeling your feet go numb. That is, after you’ve sweated through your clothes potholing in through the snow. The reward? Did I say the deer were big?

Gear Tip: Slip shake-’em-up hand warmer packets into your boots as well as your mittens. Or you can just pack a sleeping bag, which really isn’t a bad idea.
Skill Tip: Learn how to dissemble the bolt of your rifle and degrease the firing pin mechanism so it will reliably fire at zero degrees. This is a good idea for just about all of these top 10 destinations.

Hunters blame wolves on declining elk populations in the Panhandle, but calf mortality has also been compromised by cold, wet springs. It’s still some of the best elk hunting in the West, and the most rugged. Elk that feel pressure from predators retreat to the most inaccessible areas they can find, and when you’re talking about the Panhandle, that means ridges that go straight up and down. What you want is tracking snow, and what you need is the stamina to cover the miles of trail that stand between you that heavy-headed bull.

Gear Tip: The most important gear isn’t your rifle, it’s the boots which will get you close enough to an elk to use your rifle. Buy the best you can afford.
Skill Tip: Get in shape. Elk hunting is more about lungs and legs than it is about tactics and caliber.

Hunting whitetail in the Platte River country can be a bitterly cold affair, especially if you’re sitting in a tree stand. But you could say the same about a lot of northern deer hunting. So let’s talk about hunting waterfowl and deer in the low country, starting from the Carolinas and working right around the horn of Florida into the Louisiana Delta, which also received a lot of votes. The demands? Ninety degree heat, 100 percent humidity, and don’t forget mosquitoes and moccasins. The rewards start with some of the most beautiful and haunting country in the states. And if you’re lucky, you might end with a rocking chair on the old cyprus porch, a good dog at your feet, and sunset over the bayou.

Gear Tip: Lightweight breathable waders are a must.
Skill Tip: Understand that “y’all” is a contraction of you and all and is only used in the plural, when you’re speaking to more than one person. If you are talking with more than three people you can say “all y’all.”