Latest Waterfowl Survey: Plenty of Wings In the Air, But This May Be The Last Best Season

This year’s U.S. Fish and Wildlife Service Breeding Survey promises hunters one last big flight before the bottom falls out.... 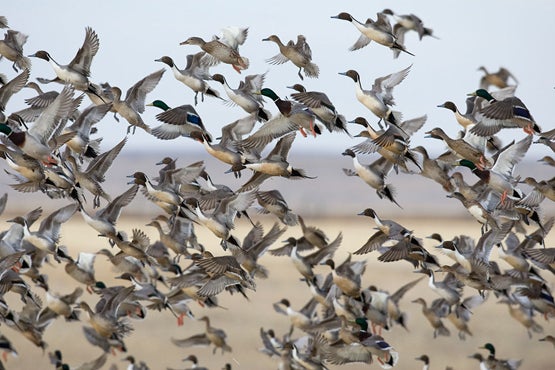 This year’s U.S. Fish and Wildlife Service Breeding Survey promises hunters one last big flight before the bottom falls out. The spring aerial count showed a total of 48,575,000 breeding ducks. That’s an increase of 7 percent from last year, 45 percent above the long-term average, and among the three highest counts since record keeping began in 1955.

Ducks are only half the equation, however. The pond count, which is the index of breeding habitat in the survey area of the U.S. and Canada, dropped 32 percent from last year. That’s still above the long-term average, but ducks have fewer places to nest.

Relentless summer drought, reductions in CRP funding, the push to produce grain on marginal land in the Dakotas, and energy extraction in the breeding grounds all point to a brewing perfect storm of habitat loss. “During the dust-bowl years and the dry ’80s, hunters didn’t quit–they worked harder to conserve wetlands,” says Ducks Unlimited chief scientist Dale Humburg. “That’s where we are again.”

Here’s how the numbers for seven popular species shape up in 2012:

Mallard
America’s duck is the most numerous in the survey area, and it continues to do well. Mallards feed extensively in grainfields, but drought may change this year’s migration patterns. With many marshes low, set up for mallards in reservoirs. Hide in laydown blinds along the shore and set out a mixed spread of mallards and Canadas.

Gadwall
The gadwall population continues to increase to the point where this species is third behind mallards and greenwing teal in overall U.S. harvest. Comparatively late breeders, gadwall (also called gray ducks or gray mallards) are suited to nesting in agricultural areas and CRP grass fields. They like slightly deeper ponds than many puddle ducks, especially if there is lots of leafy vegetation available for them to eat. Gadwall tend to either pile right in to the decoys or circle above your spread endlessly. You can buy a special gadwall call or learn to make their nasal, high-pitched quacks on a regular duck call.

Wood Duck
Wood ducks nest throughout the U.S. and are therefore not part of the aerial survey. Instead, the USFWS keeps track of wood-duck numbers through band returns and harvest figures–and woodies recently surpassed mallards as the No. 1 duck in the bag in the Atlantic Flyway. Because wood ducks nest almost everywhere, they are among the main species harvested early in the season. Shoot wood ducks early and late in the day going to and from roost ponds. Heavy overcast days are best because they force the birds to fly during legal shooting time. Wood ducks respond indifferently to decoys and calls but come readily to a spinning-wing decoy.

Scaup (Lesser and Greater)
Scaup populations have been low but have gone up over the past three years. That’s good news for hunters in Minnesota and the East Coast, but not enough to interpret as a trend. Lake points and river sandbars are classic scaup spots. They respond well to the classic J-shaped decoy rig and will fly along the arm of the J to land at the base, which should be in gun range of your blind. You can also attract them by waving a black flag.

Greenwing Teal
Tiny, surprisingly hardy birds, greenwings offer sporty shooting throughout the season until shallow marshes freeze. This year, there should be lots to go around wherever there is enough water to float a duck. Teal love mudflats, which should be in abundant supply this year. When you find teal, build a rough blind on the mudflat, throw out a dozen decoys and a spinner and forget about looking up–they’ll come in a few feet off the water. You can shoot teal all day, but often the first half hour of shooting light is the best.

Pintail
An early migrant in three flyways and the mainstay duck in the Pacific Flyway, pintails nest early in temporary wetlands and are sensitive to both drought and early farm-field preparation. Pintails respond to a trilling whistle. They feed on both crops and marsh plants and often will circle high over decoys before committing–or not. Pintails are least cooperative on cloudy days and decoy best in sunshine.

DIFFERENCE FROM 2010 **
ATLANTIC: -24%
MISSISSIPPI: +8%
CENTRAL: +61%
PACIFIC: +7%
**
Canvasback
Good news: Breeding numbers are high above the long-term average. Scout for water with submerged vegetation such as wild celery or sago pondweed. Hunt cans on smaller, deep marshes with a shore blind and a line of three dozen decoys, or from a boat blind on big water with a couple of hundred.