Hit or Miss: How to Make a Good Shot

A friend of mine who is an extremely experienced hunter and rifleman once shot at a very good Alabama whitetail... 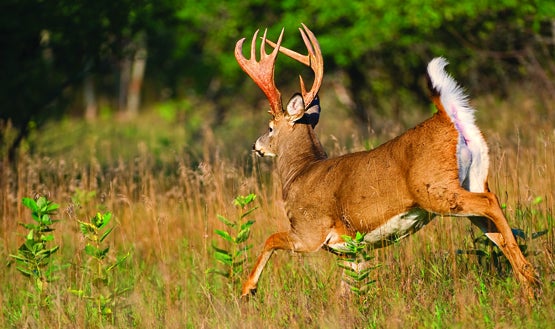 A friend of mine who is an extremely experienced hunter and rifleman once shot at a very good Alabama whitetail buck. The deer gave no sign of being hit and ran like hell, leaving no blood trail. Eventually the tracks gave out, but my friend searched for the animal for a day and a half. Why? Because he knew that he had hit it. And on the afternoon of the second day, he found it.

Much of big-game hunting is a matter of judgment, and of all the calls you have to make, the hit-or-miss question is one of the toughest. Did you hit it? Did you miss? If you did hit the animal, was it a good shot? Or was the animal wounded? If so, how badly? Sooner or later, everyone is faced with this situation.

On the Money
Only two shots are guaranteed to put an animal down in its tracks. One is a brain shot, but since no ethical hunter shoots at the head, that one is out. The other severs the spine, but since the spine in most big-game animals is the diameter of your thumb, that’s not a practical target either. The money shot, the one that brings home the venison, is one to the heart and lungs.

And yet, a hit there does not always mean an instant kill. I’ve seen all manner of creatures hit in this vital area go down in their tracks and never even twitch. I’ve also seen all manner of creatures take the same shot, show no sign of it, and run off as if they’ve just passed their annual physical. Anything can happen, and the reaction of the animal when you pull the trigger is seldom a reliable indicator.

Calling the Shot
The best way to tell whether you’ve hit or missed is simply to note where the crosshairs were when you pulled the trigger. But there are complications. First, whatever happens will happen in a fraction of a second, and we’re not equipped with freeze-frame vision. Second, when you pull that trigger, you will be in Full Adrenaline Bloat, and FAB assures that you will not be thinking or seeing clearly.

Both conditions can be overcome by lots of experience. The fellow who killed the Alabama whitetail had over 30 years of big-game hunting under his belt at the time and had been a competitive rifle shooter. He knew just where the crosshairs were when his rifle went off. He continued his search because he knew the animal was mortally wounded.

It can work the other way, too. I know of cases where experienced shooters swore they had hit an animal fatally, and yet the animal was never found. What’s involved here may be a form of self-­hypnosis: It was too close to miss; therefore, I did not miss. But miss they did.
**
On Your Knees **
If the animal runs off, note the direction in which it went, and sit tight for five minutes. There’s no reason to wait longer. Then proceed to the spot where it was standing when you shot and put up a marker. I carry a roll of orange surveyor’s tape for this. Look for tracks and blood, on your hands and knees if need be. Blood drops can be hard to see.

Send Another Bullet
As you have surmised by now, this is a business filled with uncertainty. But there’s one way to give the odds a push in your favor. When the rifle goes bang, make a conscious effort to see the bullet strike and the animal’s reaction. Then, quickly jack another round into the chamber and be ready to shoot again. You don’t know what is going to happen, and getting in a fast second shot may save you the long, hard job of tracking a wounded animal.