Jay Smith tagged this full-velvet Indiana buck on Oct. 31. Find out what testosterone has to do with keeping a deer's antlers fuzzy well into the rut. 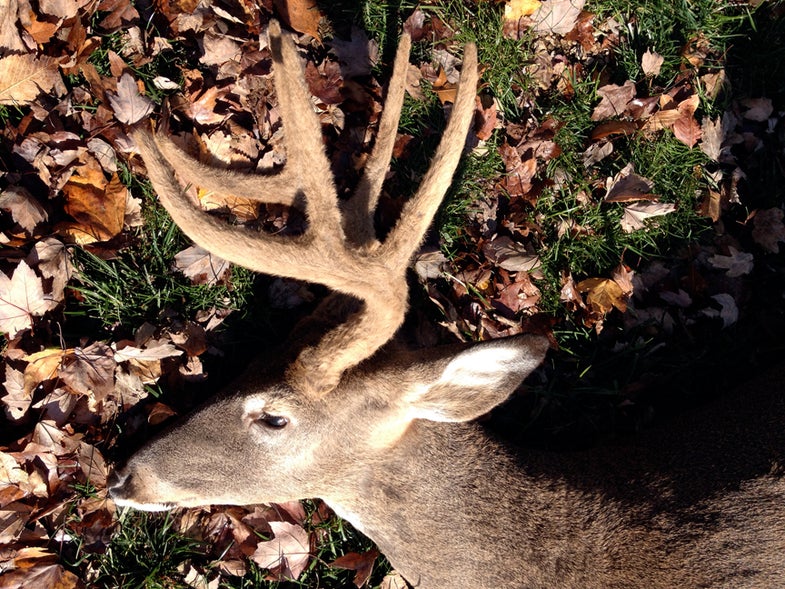 Years before the renovated landscape became a whitetail deer hotbed, the southwestern corner of Indiana played host to some of the largest coal mining operations in the Midwest. Native resident Jay Smith remembers those days.

“My father was a lifelong coal man. He worked 32 years and mined the same forests a lot of hunters explore each fall,” Smith says.

An avid archery hunter with 70 acres in his own backyard, Smith knows the area’s hills and dales like the back of his hand, and in seasons past, he’s managed to get close to some impressive deer, including a few in the 140 class, and a 17-point buck scoring 163 harvested on Halloween of 2010.

But in 2012, using a unique permit that allowed him to hunt Peabody Coal property, he decided to shift his focus from his property to an area he hunted in years prior, and while he knew the odds of harvesting another large deer were higher on private land, he felt a change of scenery would be good.

“On coal mine land, they only issue so many permits to hunters each year, so pressure is limited. Because I purchased my land from Peabody Coal, I’m able to get a permit every year, but it’s still a fairly coveted thing. They only give out so many, and the job they’ve done with the conservation and management practices on Bear Run Mine has really helped the quality of the deer herds,” Smith says. “Most years I hunt close to home, but I’d been seeing some nice activity on Peabody’s property, so I decided to spend some time there.”

On Wednesday, Oct. 31, two years after tagging his largest deer, Smith took to the woods, hoping to recreate history.

“I put a stand up the night before and went out for a morning hunt,” Smith says. “After a while I saw a few small bucks, a four and six pointer, just nudging a doe around, grunting, and making all kinds of commotion, but nothing else noteworthy.”

Moments later, beyond the deer he’d been watching all morning, another buck caught Smith’s attention.

“I saw what I thought was a large-frame deer making its way through the brush. He finally got into an opening about 65 yards away where I could get a good look at him through my binoculars,” Smith says. “I noticed his horns were different. They looked extremely thick, like they had a lot of mass. But the more I studied, the more the rack took on a spongy appearance.”

Smith tried calling with a grunt tube and used every trick in his book to get the deer’s attention. But it showed no interest in him–as did the other bucks or even the doe–and with rut activity increasing, struck Smith as strange.

“That deer couldn’t care less. The other bucks were out there bumping and nudging does around and running all over him, but he couldn’t care less about them or anything I was doing,” Smith says. “So I watched him move up into the woods and for about an hour, I gained and lost sight of him, but he just seemed to be roaming around. He wasn’t chasing or scraping or anything.”

Smith watched the deer for two more days thinking it was going to cross a little creek and play into his setup, but it never did, and while he wavered on moving his stand, he was running out of options. On Saturday, after seeing more activity farther away in the woods, he moved his stand twice to get closer to where he saw the deer roaming.

“Around 8:15 Sunday morning, the velvet buck came walking straight to me. I think he was just coming in from feeding and going to bed, walking a used trail that I had a good feeling about,” Smith says. “I first saw him when he was about 40 yards out, and I was able to make the shot at 32.”

While confident in the shot, Smith began second-guessing his decision in the time between the shot and recovery.

“While I waited out the shot and packed my stuff back to the truck, I became nervous because if the deer wasn’t in velvet like I thought, I wasn’t going to be happy with him. He wasn’t a very impressive deer otherwise. In fact, as I lowered my gear to the ground, a huge 10-point deer walked through my setup,” Smith says. “But when I walked up on him, I was just blown away. The velvet fibers were ½ inch long in some areas. I called my dad and kept saying ‘I got the velvet 8-pointer! I got the velvet 8-pointer!'”

“Testosterone helps whitetail bucks do two things, shed velvet and shed antlers,” Dr. Samuel says. “And testosterone problems start and end at the source–the testicles. Bucks with this condition either lost a testicle or two somehow, catching the barbs while jumping a fence would certainly do it, or more commonly, they just don’t descend out of the body cavity. There are also cases where they’re really small for some reason, but that’s even more rare.”

Smith noted that aside from being thick and lush, the velvet was virtually impenetrable. Typically, at this time of year, any leftover velvet is withered and easy to remove with a fingernail. But try as he may, he couldn’t even scratch the covering. What’s more, the velvet antlers seemed to grow directly into the deer’s skull–no pronounced, mushroomed collar or burrs near the pedicle. Dr. Samuel said that clue only reinforces his opinion about the deer’s low-testosterone condition.

“Older deer with this condition become cactus bucks because they don’t shed their antlers and a new set tries to grow on top of the old one. It makes them look really weird around the base. But given that he has a relatively symmetrical frame, I’d say this is its first rack after some kind of testicular injury,” Dr. Samuel says. “This condition can also have a similar effect in does, only in those cases, the females carry velvet antlers because they have too much testosterone–not the other way around. A doe’s racks stay in velvet and doesn’t shed, the same as a buck.”

Low testosterone could also explain why Smith’s buck showed no signs of rutting behavior or reaction to his grunt calls. Without normal levels, the urge to mate likely wasn’t a passing thought.

“The good news is low testosterone levels don’t affect meat quality at all,” Dr. Samuel says. “But I don’t know if this condition would make him sterile. While the deer has reduced testosterone, I wouldn’t think he’d lose the ability to mate, but there’s a good chance he’s lost the desire. It all depends on how much testosterone he’s working on.”

After close inspection, Smith says he couldn’t find any injury that might suggest the deer’s low testosterone levels were the result of non-biological factors, and that while it’s certainly not the biggest buck he’s dispatched, it ranks high on his whitetail resume.

“There was nothing on the deer that made me think it had been injured,” Smith says. “It was a large bodied deer, his coat was in great shape and thick, but his neck wasn’t swollen like you’d expect to see at this time of year. And when I field dressed, he had the proper parts. In all respects, he looked like a normal deer, just with a bunch of hair on his rack,” Smith says. “It’s not often that you can see a buck that you didn’t even know could exist, then be able to hunt him for five days straight, and harvest him at the end. That’s made this all that much more special. It’s quite a trophy–a pretty cool deer.”