Don Higgins has shot some fantastic whitetails in his 35 seasons of bowhunting, but none quite like the one he... 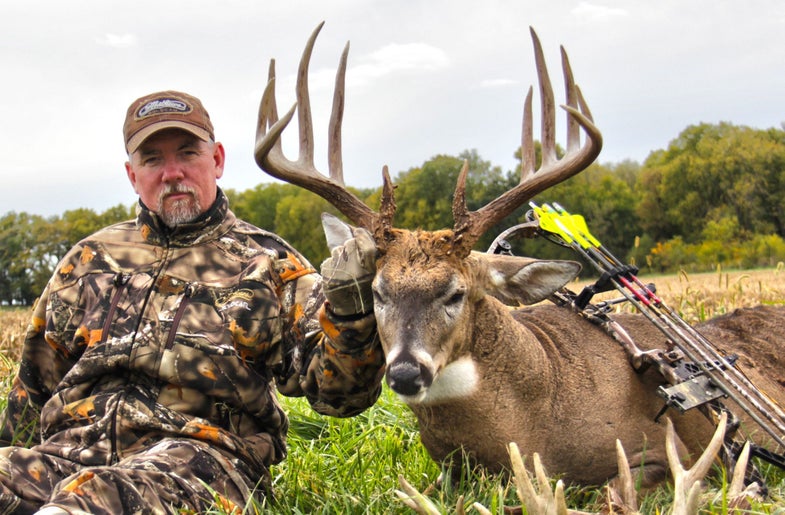 Don Higgins has shot some fantastic whitetails in his 35 seasons of bowhunting, but none quite like the one he arrowed last month. While the Illinois expert has shot bigger deer, he knew his 2012 trophy better than any other. The monster whitetail lived nearly its entire life on Higgins’ farm, and the gross B&C whitetail was highly visible.

“Through trail cams, scouting observations, and hunting, I’ve been able to watch some pretty nice bucks,” he says, “but I had more history with this one than any I’ve ever known.”

Higgins owns 120 acres split in two sections, and leases a parcel in between. He says he hunts “about a 300-acre piece of ground” that’s a combination of timber, switchgrass and CRP, a small creek bottom, and some crop fields.

“Over the course of five years, I saw buck countless times, and I only caught him off that 300-acre parcel once. I was driving my truck and spotted him chasing a doe onto the neighboring property. He saw my truck and ran right back onto my property,” he says.

Higgins first noticed the buck when it was 2 1/2 years old.

“I got him on trail cam that year, and I knew he was a buck with a lot of potential,” he says. “It was odd; he came along at a point in my hunting life where I’d decided to raise the bar for myself. Up to that point, I figured if a buck was 4 1/2 years old, he was big enough to shoot. But that fall, I’d made up my mind to let them get a little older. I love the challenge of hunting a really old, smart, buck. And some whitetails just don’t reach their potential until they’re 5 1/2 or older.”

In this first trail cam photo from 2008, the young buck had a beautiful 5-point left side. And on its right, exhibited an antler trait that would help Higgins identify him for the next several seasons.

“He had a forked G2 on the right side, and he carried that fork in each of the next seasons, though it would alternate sides from year to year,” he says. “Although, oddly enough, when I killed him this fall, he’d gone to a clean 6×6. Usually a buck will grow more junk the older he gets, but this one cleaned up.”

Higgins found the buck’s sheds in the spring of 2009, as he would in each of the following springs.

“They were all on my property,” he says. “He not only lived here during the fall, but all year long. Another interesting thing about this buck was that, in all my encounters with him and finding his sheds each spring, he never broke a single tine. I’m assuming he was just not a fighter. When I skinned him out this fall, he did have some wounds on his body, which appeared to be from the antlers of other bucks. So maybe he couldn’t avoid a battle or two, but it sure seemed to me that he didn’t go out of his way to start one.”

It was pretty easy for Higgins to pass on the buck when it was 3 1/2 years old in the fall of 2009. But it turned a little tougher the next season. Higgins’ new determination to let such bucks get one year older was severely tested that fall.

“I had encounters with that deer in the early season, the pre-rut, the rut, and the late season,” he laughs. “It just seemed like he was following me around. By the time the bow season had closed in January, I’d had him within easy bow range 13 different times!”

Once again, Higgins found the buck’s sheds the following spring. And that fall, the encounters began again. Even though the buck was now 5 1/2 years old, Higgins decided to let him go another fall.

“I just thought that eventually his rack would really blow up, and he’d gain a bunch of inches,” he says. “He made a slight jump from the year before, but not nearly what I expected. Don’t get me wrong; he was an awesome buck—his sheds scored in the 170s—and in many, many seasons I’d have been proud as could be to shoot him. But I just rolled the dice on him making it one more season and finally getting to be a really, really big deer.”

The homebody buck did survive that season, and Higgins had high hopes as the calendar turned to 2012. He found the buck’s sheds again in the spring. Once summer began, the whitetail started showing up in trail camera photos. But he had not made a significant jump in antler size, even though he was now 6 1/2 years old and in the prime of his life.

“I was really pretty surprised,” Higgins says. “From the rack he grew as a 4 1/2-year-old to the one he wore the day I shot him, he’d maybe grown 6 inches. It just seemed like he reached that size and stopped.”

That realization prompted Higgins to go after the homebody buck.

“I decided that if he wasn’t getting any bigger, I wasn’t gaining anything by passing him,” he says. “He was a great trophy that I’d be thrilled to take. So when the season opened, I set up on him. The first time I saw him he came out of some switchgrass he’d been bedded in and walked into a clover plot. He was almost in bow range when he just turned and left.

“The next day I went to the same stand. I had a great evening hunt. I watched four bucks get up to feed, and it was like a parade of year classes; there was a 2 1/2, 3 1/2, 4 1/2, and a 5 1/2-year old buck. And then I looked up and here came the homebody buck. This time he was bedded in a little strip of timber instead of the switchgrass. But he came out to the clover patch I was watching, and I made a good shot on him.”

Higgins’ buck had a 21-inch inside spread and a 5 6/8-inch circumference at the base of the main beam. The longest tine was 11 inches and he had, oddly, dropped the forked point that had made him so easy to distinguish. The final gross B&C score was 176.

“I was thrilled to take a buck that I’d had so much history with,” Higgins says. “I’ve never known a buck that was so faithful to one area his entire life. To have all those photos, video clips, and shed antlers from one deer—and then to be lucky enough to tag him—was just remarkable for me. I feel lucky to have known him so well, and I may never have an experience like that again.”