Hunting to Survive the Apocalypse: An Interview with ‘Disaster Diaries’ Author Sam Sheridan

I first met writer and mixed martial arts fighter Sam Sheridan in Alabama in August of 2010. He was training... 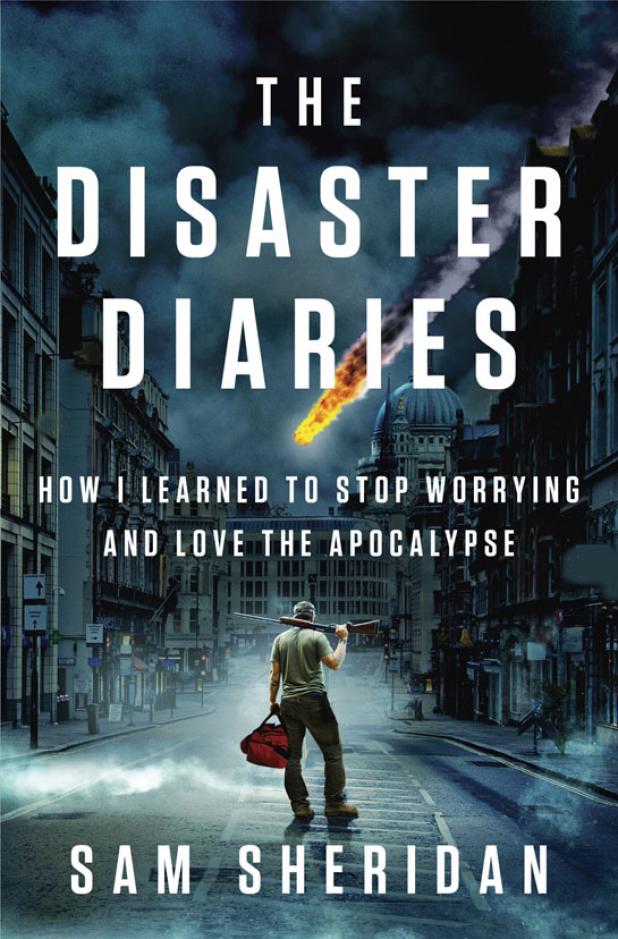 I first met writer and mixed martial arts fighter Sam Sheridan in Alabama in August of 2010. He was training for three weeks with my friend Tiger McKee at Tiger’s Shootrite Firearms Academy, out in the country near Guntersville Lake. Tiger invited me to come out and join them for a couple of days of team tactics shooting, and Sam and I burned through a whole lot of .223s. The days were long, and it was typical Alabama-in-August weather, 100 degrees plus, 90 percent humidity, the sun bearing down like a man trying to crush a tick with the flat of his thumb.

Tiger and I are born to that heat. Although he’s younger and in better shape than either of us, Sam is not. I watched him and waited to see if he would buckle, which he never did. Had I known exactly who he was, I would not have been surprised. Sam has delivered sailing ships across the globe, battled wildfires in the Rockies and walked the Peruvian Amazon, grappled with Brazilian jujitsu masters and fought toe-to-toe with Muay Thai professionals in Thailand. He’s written two of literature’s best books on fighting: A Fighter’s Heart and A Fighter’s Mind. He doesn’t buckle. So it was a surprise to me when he told me what he was doing at Shootrite, and why he was writing the book that has now become “The Disaster Diaries: How I Learned to Stop Worrying and Love the Apocalypse.”

“I’ve always felt kind of unprepared,” he explained. “There are lots of things I just don’t know how to do, and I want to change that.”

“The Disaster Diaries” is the story of a quest for knowledge, of learning the skills of survival from unique individuals who are experts in their fields, from Inuit hunters to SoCal car thieves. There is a dose of everything here from shooting to making fire with a bow drill, from finding water in the desert to primitive hunting and trapping. Beyond the basics there are chapters on hot wiring cars, knife fighting, navigating in hostile territory, evasive driving, psychology and wilderness medicine. The book is a deeply observed personal journey, and every reader from the serious TEOTWAWKI prepper to the weekend squirrel hunter will find something fascinating here. I thought Field & Stream readers would enjoy a short conversation with the author.

HH: When we met in Alabama, I had no idea of the extent of the book, or of the journey you were on at that time. What inspired you to undertake this project?
Sheridan: The most basic thing. I had a child, a son. With that came a seriously heightened sense of responsibility. I’m pretty handy for a New York or LA guy, but compared to most outdoorsman, compared to most Field & Stream readers, I just didn’t know how to do a lot of very basic things. I wanted to learn the nuts and bolts of survival, and when you open that Pandora’s Box, there’s really no end to it.

HH: What skills did you think you needed when you started out?
Sheridan: I wasn’t sure. I had something left over from my childhood- the small town I grew up in Massachusetts, all the people were massacred by Indians back in Colonial days. That history was very much a part of my growing up, imagining that, knowing that it happened right there where we played and lived, that idea of ‘what was it like?’ or ‘what would I have done?’

Now, we all see the coverage on television, war footage, the tsunami, 9/11, all those real events. You hear the talk of “bombed back into the stone age” and you can look at the films of Afghanistan, or some other place, and see that can literally be true, that it happens to people.

And then there all the silly fears, too, alien invasion, zombie apocalypse, that don’t always seem so silly. I have insomnia, and I have nightmares, and I thought that getting the knowledge to deal with those kinds of situations, to take care of my family, would alleviate some of the grimness. This book is my story. It’s not about how wide you should build your winter shelter, or how many pounds of beans you’ll need- I trained with people who can tell you that- this is the overstory, how to shoot, how to hunt, how to build a shelter or a trap.

HH: The book seems to be coming out at just the right time. There is so much talk of collapse, of apocalypse; it’s almost part of the national consciousness. Why do you think that is?
Sheridan: It’s nothing new. We’ve always had these fears. Fear of death, of destruction. Apocalyptic prophecy is constant throughout human history, in human consciousness, in every culture I know of. I do notice in studying this that the more oppressed a people feels, the more they seem to believe in Armageddon prophecies. Right now I think that we have a lot of people doing things that are so difficult, with a lot of drudgery in jobs and commutes and paying the bills. When the world as we know it ends, all those things are done. It’s just you and your rifle and your backpack, fighting, evading, maybe saving some beautiful woman from the bad guys. All the drudgery is swept away.

HH: That’s the fantasy version, anyway.
Sheridan: Yes. And what I found out was so completely different than that. Real survival is so slow. Hours of painstaking work, most of it boring. This was one of the most powerful experiences of all for me. When I was training primitive skills with John McPherson in Kansas, it was normal to spend an entire day accomplishing one task. I’ve never been patient. I’m a rusher. And rushing to make a fire with a bow drill means failure. If your bow drill sucks because you didn’t make it right, if your fire bundle sucks, that fire is never going to happen. You freeze. And hunting? Well, that seal is not coming through that ice when you want it to. And if you don’t wait, you die. If you are impatient, you die. What a thing to learn!

Fiber for cordage. Meat. Fire. It’s as simple as that. Or as complex. The basics of self sufficiency. The basics of life. A tighter relationship to the world that provides them. That’s what I found.

HH: In the book, you travel to Colorado to hunt cow elk. Was that really your first big game hunting experience?
Sheridan: It really was. I tried to bring the city slickers’ eye to something you guys already know so well. It opened up a whole new world to me. I had never imagined that there was so much to know, or that hunting could be so powerful. I wrote about being a sailor, and seeing those dolphins at the bow of the ship, and you know they are at home in this huge other world, below you and all around you. Seeing them connects you to something so much larger than yourself, and seeing and hunting those elk does the same thing.

And there’s the irrevocable nature of killing something. Either you get the animal or it gets away. What I found in hunting was what originally drew me to fighting. All the talk is nothing. You tell me how skilled you are. It means nothing. The only thing that means anything is can you do it, or not?

HH: Did all the shooting and tactical training you did help you with the hunting?
Sheridan: The shooting I had done with Tiger was absolutely critical. When I was younger, I hated high-stress situations. That’s part of what I’ve worked on for years, putting myself under stress, inoculating myself against stress by learning the skills to deal with whatever situation it is. On that elk hunt, I did not feel the stress that I expected. I made mistakes, and I did not know enough, but all the shooting I had done either gave me the ability to override the stress, or not feel it as strongly. I made the shot when the time came.

And you asked me about how much shooting I’d done in my life before this. I’d shot maybe ten times. My dad was a Navy SEAL, and he taught me the basics when I was a kid, mostly just the safety aspects. When I got to Tiger’s I started from scratch. Three weeks and 2,000 rounds or so later, I felt like I was starting to understand it. That training was so intense, the repetition, the heat, all that effort and concentration, day after day. I would drive back to my motel room and just lie down and sleep until I had to get up and do it again.

HH: I’d really like to talk about your traveling in the Arctic with the Inuit–it’s one of my favorite parts of the book–but I know you are busy. Can I just ask you if you have a new project in mind?
Sheridan: My next book is about hunting, and so is a lot of what I want to do next in my life. I have discovered something that I did not know existed when I began the research for the Diaries. Hunting is what men have done forever, living outside, watching animals, reading the weather, all the complexity of a hunting life. 10,000 years or less of farming and living in cities has changed us, maybe, but everything up to that point, all our history, was hunting. To tap into that is to tap into something vast. Most people who read Field and Stream already know that, but for me it was new, and I want to follow it.