At SHOT Show 2013, interest centered on rifles, handguns, and anything tactical. Nevertheless, shotgun makers were there, competing for their... 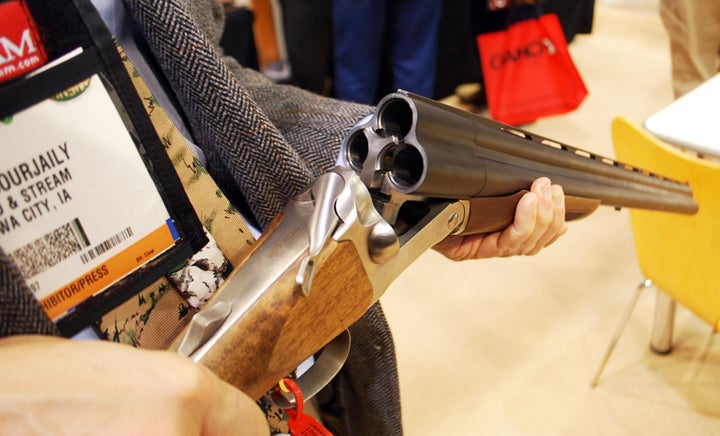 At SHOT Show 2013, interest centered on rifles, handguns, and anything tactical. Nevertheless, shotgun makers were there, competing for their share of the money the public is throwing at guns. There were some interesting new models in all price ranges. Since my topic is clay and hunting guns only, I am not covering tactical nor 3-gun guns here. I am going to pretend Remington’s zombie-camo versions of the Versa Max (one in green, one in, wait for it . . . pink) do not exist. Even with those restrictions there were still a lot of guns of interest at the show. Here they are:

Chiappa Triple Crown
“Most Unusual” surely goes to Chiappa’s Triple Crown, a three barreled break action that handles much better than you might expect from a gun with an extra barrel. This gun may prove a big seller in Australia where pumps and semiautos are banned, and it could find favor among eccentric waterfowlers here, too. The Triple Crown is a 3-inch 12 with a single, non-selective, mechanical trigger. It has choke tubes in all three barrels and sling swivel studs. I’ll be shooting one soon, I hope. It sells for $1,600.

Savage 220 LH
Savage offers its tackdriving 20 gauge 220 slug gun in a left-handed model made just for me and the other 10 percent or so of the population tired of trying to work bolts backwards. In all other ways it is identical to the regular 220, with a detachable two-round magazine and Savage’s excellent Accu-Trigger. These guns are great shooters and affordable too at $565.

Mossberg 835 with Matthews Harmonic Dampener
Mossberg teamed with bowmaker Matthews this year to offer a series of pump guns with this wheel-looking dampener in the stock (final versions will be matte black). The rubber ring absorbs vibration and delays the rearward movement of a counterweight, softening and lengthening the recoil sensation. Mossberg claims a 20-30 percent reduction in recoil. The lightweight (7 pounds) 3 ½-inch 835 is an excellent candidate for a recoil reducer whether in a turkey model, shown here, or a waterfowl or slug gun. The Harmonic Dampener adds about $50 to the price of the gun. Price: $630.

Stoeger Condor Longfowler
Stoeger adds to its Condor line of O/Us with the Longfowler, a 30-inch barreled, 3-inch 12 gauge. Weighing about 7 ½ pounds with a matte finished walnut stock, the Longfowler should make a good choice for a hunter who wants an inexpensive break action gun to abuse in the blind, and it will double as a target gun, too. The Longfowler has a vent rib and vented side ribs and extended choke tubes. There is also a 30-inch “Uplander” Longfowler (a contradiction in names, I know) side by side for the same low price of $449.

**
Browning 725 Feather**
Last year Browning successfully made over the venerable Citori, trimming steel from its receiver and barrel to both lighten the gun and slim down its profile. The new 725 Feather is even lighter thanks to an alloy receiver that reduces weight of a 12 gauge to right around 6 2/3 pounds on the 28-inch barreled test gun I had a chance to hunt with just before SHOT. The Feather comes with Browning’s soft Inflex recoil pad and new Invector DS chokes. The walnut is matte finsished and the receiver is decorated with game scenes. Price: $2,649.

Browning A5 3 ½-Inch
In 2012 Browning brought back the familiar Auto 5 profile housing Browning’s own take on the inertia action made famous by Benelli. For 2013 they have made a 3 ½-inch version. The engineers were able to make a 3 ½-inch receiver that was no longer than the 3-inch model so the gun shares the balance and light weight (around 7 pounds) of the 3-inch A5. It does have Browning’s Inflex pad to help ease the pain of recoil but this gun will still let you know it’s there. Nevertheless if you want the reliability of an intertia gun, the extra reach of a 3 ½ but you also want the squared receiver and Browning Buckmark on your gun, the new A5 is for you. Price: $,1559 in black; $1,699 in camo.

Browning BT99 Micro Midas
Browning’s BT 99 single shot trap gun is a great entry level gun and the new Micro Midas is designed to be a first gun for younger and smaller shooters. It has a 13-inch stock to fit shorter arms. It comes with a 28 or 30 inch single barrel making it easier to handle than a fullsize 32 or 34-inch gun. It has a matte finished walnut stock with a concave trap-style pad and it comes with an Improved Modified choke tube. The gun has an extractor that raises fired and unfired shells for removal and it has no safety for young shooters to accidentally leave on. Price: $1,429.

Remington Versa Max Sportsman
The excellent Versa Max now comes in a stripped down version at a significant savings. You lose overmolded grips, a cheek pad and stock shims but you get the terrific performance of the Versa Max and a very clean, neat looking gun and you save a lot of money, too. The Versa Max cycles almost any 12 gauge load from the lightest reloads up to heavy 3 ½-inch magnums. It has the least felt recoil of any semiauto I have ever fired. The Sportsman version comes in black or camo with a single Modified choke tube and sells for $1,025, almost $400 less than the strandard Versa Max.

Remington 1100 50th Anniversary
One of the most important shotgun advances ever, the 1100 was the first reliable gas semiauto on the market when it debuted in 1963. Its reliability and soft recoil quickly made it a favorite of hunters and target shooters. To celebrate the 1100’s 50th birthday Remington offers a specially engraved 12 gauge model with a 28-inch barrel. The gun has Remington’s A grade walnut, comes in a hard case and sells for $1,999.

Benelli Montefeltro Synthetic
The walnut stocked Montefeltro has long been popular with upland and dove hunters. I have one myself that I use on those days I want to shoot a semiauto in the uplands, and it is a great bird gun. This year Benelli offers a Montefeltro with a synthetic stock for those who like its flat rib contours but prefer an easy-care stock. The stock has Benelli’s dimpled “AirTouch” surfaces in place of checkering. It comes with a 26-inch barrel, 12 gauge only and weighs under 7 pounds. Price: $1,130.

Franchi Aspire O/U
The Aspire is a wand of a smallbore available in 28 and .410 that weighs under 6 pounds thanks in large part to a rounded receiver scaled down to 28 gauge proportions. The gun boasts traditional good looks with a Prince of Wales grip and case-colored receiver. It’s also possible to add a set of .410 barrels to your 28 or vice versa. Price: $2,299.

Beretta 692
Beretta replaces its already great 682 target gun for 2013 with the 692. Like its predecessor, the 692 although not cheap, costs about half the price of a Perazzi, Kreighoff or Beretta DT 11 yet it is still durable enough to survive high-voume competition shooting all the way up to the Olympic level. The 692 has an overbored barrel and lengthened forcing cone and Beretta’s extended Optima Choke HP system. It has a rib that tapers from 10mm to 8mm while the receiver has been widened slightly, adding a little weight without raising the low profile for which Beretta O/Us are known. It also features a top lever with an overmolded rubber surface to make it easier to operate. It will sell for about $5,000 for the basic model, which is a lot of money but a bargain in the serious competition shotguns.

Beretta A400 Action
Beretta’s new flagship semiauto, the A400, finally comes in a 20 gauge model with the debut of the Action model, available in both 12 and 20. Trim and light at around six pounds with a copper-tinted receiver, the A400 Action is available with Beretta’s Kick-Off recoil reducer which would make it an outstanding choice for high-volume Argentina doves: light enough to lift all day, but also very low recoiling it. There should be lots of niches the 20 gauge Action can fill in North America as well, from grouse hunting to ducks over decoys. Like all A400s it is very easy to maintain and has its return spring on the magazine tube where it is easy to get at. Price: $1,600.

CZ Standard Grade Sporter
The CZ Standard Grade Sporter is a bargain in a target gun. It’s an unembellished version of the company’s sporting clays gun coming in at a $700 lower MSRP. It features a comb fully adjustable for drop and cast, a target rib and six extended choke tubes. It is well balanced despite its weight of over 8 ½ recoil-absorbing pounds. The stock features a right-hand palm swell and you can choose between 30 and 32-inch barrels.

Webley & Scott 2000
The Webley & Scott is a refreshing exception to the trend of companies buying old, respected names then slapping the venerable brand on guns of depressing quality. The 2000 is a handsome, well-made shotgun and it’s definite proof that not all Turkish guns are cheaply made. To the contrary, Turkish craftsmen do great woodwork and the country’s walnut is famous. The fit and finish on the 2000 is excellent and the case-hardened receiver is gorgeous.It features a pistol grip and single trigger and comes in 12 and 20 gauge with 3-inch chambers 28-inch barrels, five choke tubes nice fitted luggage case. Price: $2,499.