A Brief History of Handgun Hunting (With Whitetails in Mind)

_Check out our list of the Best Handguns for Deer Hunting here! _ **__ Originally designed as a defensive weapon**... 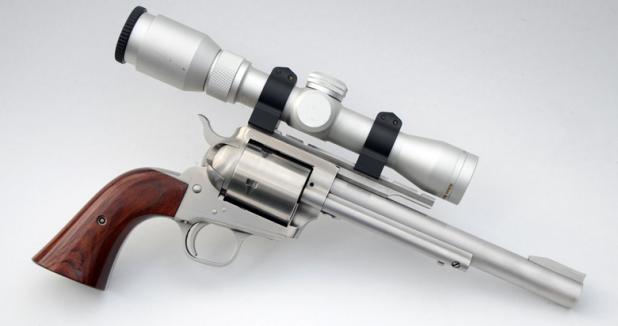 _Check out our list of the Best Handguns for Deer Hunting here!
_

Originally designed as a defensive weapon** for use against two-legged foes, the handgun did not begin to receive a great deal of attention from big-game hunters until the 1935 introductions of the .357 Magnum cartridge and a Smith & Wesson revolver chambered for it. Billed at the time as the world’s most powerful handgun, it was developed for law-enforcement use, and FBI director J. Edgar Hoover received one of the first to leave the factory. Then Major Douglas Wesson, who was a grandson of company co-founder Daniel B. Wesson, used a S&W revolver on highly publicized hunts for moose, elk, grizzly and antelope. The rest, as they say, is handgun-hunting history.

While Major Wesson’s adventures stirred up interest in hunting with a handgun, it really did not begin pick up a lot of momentum until about 20 years later. One of the biggest steps forward took place in 1955, when Smith & Wesson and Remington teamed up to produce the Model 29 revolver and the .44 Magnum cartridge. In addition to a muzzle energy rating close to twice that of the .357 Magnum, the fatter bullet punched a bigger hole through yon target. The .454 Casull, introduced two years later by Dick Casull and Jack Fulmer, upped muzzle energy to 2,000 ft.-lbs., making it the world’s most powerful handgun cartridge for about the next half century.

Up until the 1960s, the handgun even in its most powerful chambering was best suited for shots on game out to 100 yards or so, but that changed when handgun hunters began to experiment with rifle cartridges. One of the first was Alfred Goerg, a Washington state writer who bagged various and sundry game with a custom-built, single-shot pistol in .257 Roberts built on the Remington Rolling Block action. Possibly influenced by Goerg’s work with his single-shot pistol, Remington introduced its XP-100 in 1963. Its action was a modified version of the company’s Model 700 rifle action. Initially offered only in .221 Fireball, it eventually became available in more powerful chamberings such as the 7mm-08 and .35 Remington.

In 1967, Thompson/Center Arms began producing the Contender pistol. Initially chambered only for the .22 Long Rifle and .38 Special, its extremely sturdy tip-up action later proved to be capable of handling cartridges ranging in power from the .30-30 Winchester to the .45-70 Government. Hunters who took the time to practice enough to become proficient with the XP-100 and the Contender found it possible to cleanly take game at far greater distances than was practical with any revolver, especially when special handgun scopes with long eye relief eventually became available. They also proved to be more accurate–a top-quality single-shot pistol will shoot inside an inch at 100 yards.

While Remington’s XP-100 is no longer manufactured, plenty of other long-range handguns are available today, in a variety of great chamberings. I consider the .257 Roberts, 6.5 JDJ and .30-30 Winchester to be good to start with, while the 7mm-08 Remington, .308 Marlin Express, .309 JDJ and .308 Winchester are better choices for those who can handle the additional recoil. I consider a 14- to 15-inch barrel optimal, because anything shorter reduces velocity by an unacceptable amount, while a longer barrel can make the gun awkward to carry in the field.

Click Here to check out Layne Simpson’s picks for the Best Handguns for Deer Hunting.