The yellow gravel road turned on itself, switching back up the escarpment. Rotting snow began to bank along the sides,... 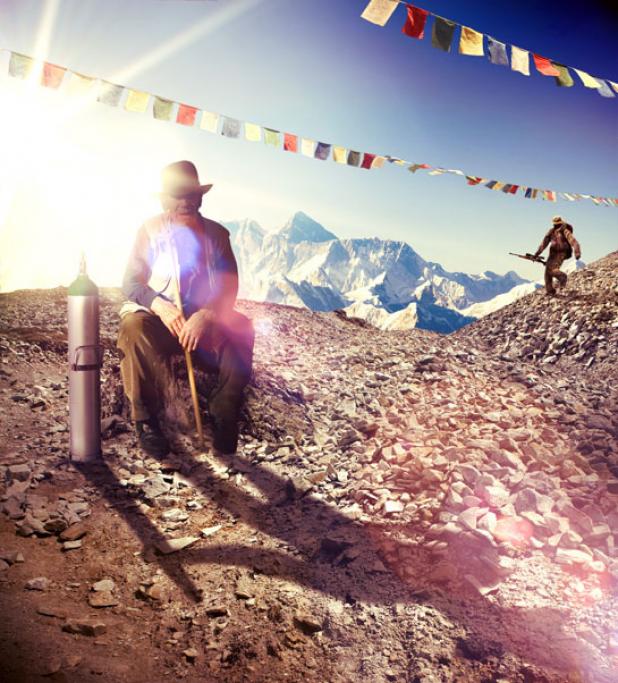 The yellow gravel road turned on itself, switching back up the escarpment. Rotting snow began to bank along the sides, the melt running down. The Land Cruiser, shiny black at first light in the town and in the village where the pavement still ran and we stopped for eight-treasure tea, was now dusted yellow and, as the road grew wet, was becoming mud spattered. It climbed the road steeply, engine revving, and you could hear the wet crunch of gravel under the tires. Finally, at the top of the plateau, where the March sky in western China was sharp blue–the dazzling sunlight through the tissue-thin air and off the crumbling white snow striking the eyes like pinpricks–was a green sign with white numerals, showing over 4,500 meters of elevation. I motioned to the driver to stop, and I got out with the interpreter so we could take a picture. The old man stayed in the vehicle.

I gave the camera to the interpreter, and I stood at the back of the Land Cruiser with the sign behind me and squinted into the lens. The interpreter snapped three photos, and when he handed the camera back I nodded my head and said, “Xie xie.”

“‘Thank you.’ Yes,” the interpreter said with pride, as if I were proving an apt pupil. We got back into the truck, and the driver started the engine and shifted into low gear.

The road still switched back, but less steeply, as we ground up it. The old man had been silent for many miles, staring out the passenger-side rear window.

“It’s not here,” he said from the back as we rounded another curve.

I turned in the front passenger’s seat to look at him.

He had on sunglasses, so I could not see his eyes; but I could see two deep straight lines between his brows. I could not see his boots, either, but I knew they were his worn pair of ropers. His jacket was quilted goose down; his hat was the felt one he’d had for a half century and had once dabbed with fresh elephant blood. I’d seen that hat with an orange cover when I was 20 years old as he laid it on the ground on the Roan Cliffs beside his .300 and opened his Case knife to dress a big 4×4 mule deer. I’d seen it long before that in San Joaquin Valley dove fields and out among the Joshua trees in the desert by the ghost mining towns where we’d shot jackrabbits when my father did not go. He was wearing it when we split up with our guides on the trail at Pink Mountain and went off to look, without luck, for grizzlies. And he wore it two days ago as we drove to see the Great Wall above Beijing; and while I talked with that interpreter about the great Michael Jordan he had started saying things about “these damn Chinese,” making the interpreter sit stiff in his seat and turn to look at him.

“You think we are ‘damn Chinese’?”

I leaned toward the interpreter.

“He’s old. Old. Nearly 80,” I said softly, believing that age was an excuse for most things in China.

The old man had come here for one last journey to a place he’d never been for game he’d never hunted, only to end up drinking alone in his room, eating his meals from a McDonald’s by the railroad station across from the hotel, and last night in the town along the Northern Silk Road, sitting on his bed, exhausted, propping himself on his balled fists, telling the hotel manager, in his gravelly voice, that he wanted a hamburger.

“No hamburger,” the manager had said in good English. “You are not in America.”

“Farther back where?” I asked. “It’s still in the gun case in the rear.”

“No,” the old man said, thinking of some other place from a lifetime of hunting. “It must be somewhere. Else. I must…” He stopped.

The driver did not speak English and the interpreter did not understand, and for a long time no one said anything in the car.

A green military truck met us late in the day, and we began crossing country without any roads and a barely visible two-track over the steppes, skirting a shallow blue lake with broken ice and waterbirds, and here and there on the plateau, distantly separated, a house surrounded by walls made from sun-dried earth. Even in the Land Cruiser you could feel how little air there was.

At last light we came to the camp of three yurts for sleeping and a kitchen tent for eating, surrounded by bare stony summits. Along with the Chinese camp manager were two smiling Tibetan girls who did the housekeeping. They were slender, with anthracite black hair and white, white teeth. One was named Spring Flower. They draped white silk hadas around our necks when we arrived. And there was one more Chinese man who did mechanical work and tended the trophies.

A Texas hunter was already in camp with his wife. He said he had taken an exceptional Tibetan gazelle but had not seen a blue sheep he wanted. He was packing to leave in the morning, and on his folding bed I saw some 20 empty cartridge cases in a pile.

When I went into my yurt, the old man was sitting up in his bed under the woolen blankets, his breathing like a ragged bellows. He asked if there were oxygen tanks in the camp, and for the doctor. I went out and told the interpreter; and he came into our yurt in a few minutes with the mechanic, now in a long white coat and a white hat like a chef’s toque. They stood on the carpet covering the ground, and the interpreter listened to the old man and talked with the mechanic-physician who nodded, then went out. The interpreter patted the shoulder of the old man, who jerked because he hated being touched, and told him to rest. Before I lay down, I said to the old man that maybe he should drive out in the morning with the other hunter and his wife and get to a lower elevation. He didn’t answer, or maybe I didn’t hear him.

The next morning, headachy, I sighted in my ’06 on a cardboard box with a black cross inked on the upturned bottom. I took a picture of the old man with his new silk scarf in front of the yurt and then shook hands, though I don’t know if he remembered.

Miles from camp on the snow-patched yellow steppe, microscopic gazelles ran in slanting tan-and-white herds, fleeing when they saw us approaching, a half mile away, vanishing into heat shimmer even on a cold day. We drove and spotted for hours, until a very good lone buck with ribbed black S’s curling back on his head, stood for us at 300 yards. I was out quickly, uncasing my ’06 and opening the bolt. I sat away from the vehicle, now a red Land Cruiser, and chambered a round. I got into the sling and cinched up, elbows on knees. The buck vanished straight down with the shot. We picked up the gazelle and started back for camp.

Tomorrow it would be real hunting, riding Tibetan ponies with the herdsmen of the area onto the summits to look for blue sheep scattered among the rocks. The old man, too old for car hunting, was far too old for that. He’d grown just too old, I thought, this man who had known me since I was born, not considering, at the time, that someday so would I.

When I returned to the yurts, the black Land Cruiser was gone. Now there was an extra tag in camp.