Chris Ott knew the enraged grizzly was coming back to finish killing him. Knocked flat, half-scalped, blinded by his own... 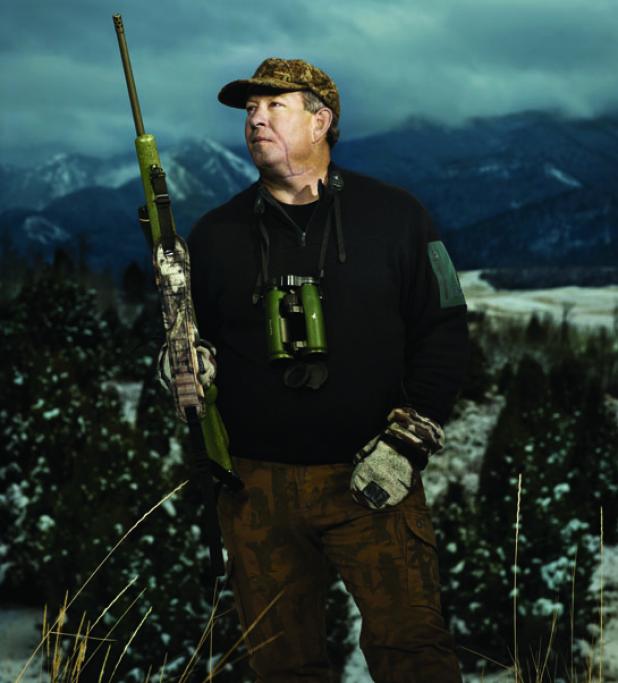 Chris Ott knew the enraged grizzly was coming back to finish killing him. Knocked flat, half-scalped, blinded by his own blood rushing over his brow and down his face, he sifted facts from surprise. Seconds before, the big sow had exploded from undergrowth and hit him, slashing open his head and biting his face and neck as she forced him down. He had spotted her only seconds before she landed on him and her slobbering maw smacked his, transforming him from a fit 42-year-old man to wounded prey in the predator’s grip. Now he was experiencing what sometimes happens to people as they die. It was mid-attack. Time seemed to slow. The momentum of the bear’s lunge had carried her past. This was his stay–the time a grizzly requires to stop, spin, and pounce back on broken prey. It stood to be the rest of Chris’s life.

He could hear the bear crashing across the few yards of thicket that separated them, her hot mouth reddened with his blood. He had time for a single word: “Bruce!”

The day in mid October had been set aside for the work that accompanies the end of a hunt. A two-week trek in northeastern British Columbia had run its course. Chris had taken an impressive stone sheep the day before, capping a 2007 season that had been carefully planned and well lived. He and his guide, Bruce Willis, had found a concentration of big rams in July, and had returned in fall to find the sheep down from the mountains to graze on willows, fattening up ahead of winter. Chris had never seen rams so low.
The previous morning, he and Bruce had left camp early, leaving behind their wrangler, Nick France. They walked about a mile and set up in a creek basin, to glass a hill overlooking the feeding grounds. There they spotted a fine ram, bedded down. When the animal rose, Bruce had already propped up a thick branch as a rest. Chris dropped the ram with a kneeling 250-yard shot from his .270 Weatherby Magnum. They dressed the animal and packed it back to the tents, where they agreed to load the nine horses in the morning for the walk out, which would take a full day.

Hunts can be hard to end. With this one a success, Nick asked for a few hours for himself in the morning while the other men broke the camp. He wanted to take a mountain goat. Chris lent Nick his rifle, and Nick walked out at dawn. Chris and Bruce would monitor the two-way radio and be ready to help. About two hours later, they heard gunshots. They stopped packing and headed for the creek bed to look up to where Nick had set up.

Their camp was in thick brush, crisscrossed with fallen logs. Even their short walk was slow going. Chris’s peripheral vision picked up movement to his left. The movement assumed a shape: a grizzly cub, man-size, perhaps 3 years old and maybe 20 yards out.
“Bear!” Chris said. “Bruce, it’s a bear!”

Neither man had a rifle; they were so close to camp that they had not thought they would need to defend themselves. Bruce reached down and picked up a large fallen branch. He began to wave it, projecting size and confidence. As Chris stepped backward, his feet caught on a downed log. He tripped, landing hard on his back. He had had run-ins with grizzlies before. He knew that body language signaling fear or vulnerability could trip a predator’s switch. Falling down left him in about the worst position to be in. He had to get up.

It was too late. Scrambling for footing, Chris heard something heavy crashing through the thicket. He spun instinctively and faced the noise on one knee, looking directly at a charging grizzly. It was the mother bear. She was closing the distance without a snarl or roar, focused, intent to kill. Chris flinched and she was on him, hitting his head like a sprinting Labrador retriever comes down on a tennis ball. Her mouth closed on his face. Her claws raked the scalp beneath his hair. He smelled her putrid breath as their noses met. As she snapped her mouth closed, Chris’s jaw shattered within hers, breaking like a coffee cup.

Then it ended. Somehow, she was past him.

In the inexplicable ways of violence, the bear had hit Chris almost as exactly as she needed to for an instant kill. And yet Chris was alive. Her teeth had closed on his face and neck but missed his carotid artery. The heavy swing of her mitt had not struck him squarely enough to break his spine or knock him out. And even as she had landed, the speed of her pounce had caused her to overshoot slightly. Whether this was fortuitous or cruel was a matter of perspective. It meant that Chris–sprawled on the cold ground, sightless, blood rushing out–would be both helpless and alert for the follow-up attack. He was a blunt and sometimes hard-edged investor who had conditioned hard so he could push deep into high-elevation wilderness. He ordinarily trusted his preparations and the methodical workings of his mind. He was outmatched.

As time slowed, he tried to decide what to do. Fight? Impossible. Flight? Not without eyes, and not this far into the attack. He saw one choice: Play dead, and hope the sow would lose interest.

“Bruce!” he shouted, as he covered up.

Chris rolled to his stomach, clasped his hands against the back of his neck, and locked his elbows together by his blood-soaked chin. He was offering his shoulders and arms to the bear, while protecting his neck. How long could he hold out if she began to shred?

The grizzly landed again, dropping her head like an anvil. This time she chose his back, biting through his canvas coat and wool shirt. He felt her canines sink into his meat.

With furious speed and in silence, she released him, then bit him again. Then a third time. Chris understood that she was trying to gut him, or to rip open his lungs. He heard a rifle shot. The bear released him, looked up–and froze. She had not been hit. She was recalculating. As quickly as she had been on him, she was off of him. Chris heard her rushing away. She was charging the camp.

There was a second shot, followed by silence. Chris remained belly down, feigning death. Was she eating Bruce now?

Bruce appeared in the thicket. Moving fast, he had made it to camp, retrieved his rifle, and fired a warning shot. This had prompted the bear to charge him. His second shot hit her neck and shoulder, breaking load-bearing bones. She collapsed among the terrified, tied-up horses. There she died.

It had all lasted only a minute or so, and stopped as quickly as it had begun. One more bite and Chris might have been dead–his head crushed, his spine snapped, his insides exposed. Instead, he was alive, though perhaps not for long. He sat up, felt wind rushing across his teeth through his exposed cheek. He reached for his face, part of which hung loosely, and moved it back into place. His hand filled with blood. Two cubs were bawling somewhere nearby, in the woods. They did not sound like a threat. Chris had no time for them. He was taking stock. He did not know how badly his back was wounded. But he had full mobility and motor skills. His airway was open. He was breathing clearly.

He began channeling thoughts. The bear was dead. His life now depended on him. If I panic, I die. If I let my heart rate climb, I pump out all of my blood.

His heart was pounding. Control. He needed self-control.

I have a family. I have two sons. I’m going to go home. I have to figure out how. Stay calm.

Pain crashed over Chris like a wave. As endorphins wore off, his body informed him of the damage. He felt intense burning in his back and across his head. He was being seared. He stood and staggered to camp, where Bruce gave him horse blankets to lie on. Chris knew he needed to stop the bleeding on his head. He asked for bandages. As he pressed the gauze to himself, he also knew he needed medical help but could not ride out on horseback to get it. There was no time.

He always traveled the wilderness with a satellite phone. He asked Bruce to retrieve it and get a helicopter moving. The weather was not bad. There was light. They could bring in an aircraft and take him out. Huddling for warmth, he realized that his bleeding was slowing. This fact provided information: The bear must not have opened an artery or torn a vital organ. Chris understood that he had a chance.

Nick, who had walked back to camp, was indignant as he arrived. No one had been answering radio calls. He saw the huge bear carcass, about 350 pounds, sprawled dead inside the camp. He saw Chris. It was perhaps 35 degrees. Nick quickly covered Chris up with more blankets, examined him, and changed the dressing on his mangled face.

The helicopter arrived in early afternoon and soon lifted the mauled man away. Chris Ott had a long recovery ahead, with extensive suturing, courses of intravenous antibiotics, and rounds of facial reconstruction. With time he would be fitted with a replacement titanium jaw. He knew nothing of this yet. But the aircraft was climbing and gathering speed. The wilderness was growing small beneath him. He was moving toward a hospital. From the mouth of a grizzly, with seconds to live, he had emerged. His life’s duration and its prospects would not be determined by a grizzly’s next bite. Chris Ott was alive, and headed home.