The skull looks a century old, even though it was pulled from an Iowa creek bed just six winters ago.... 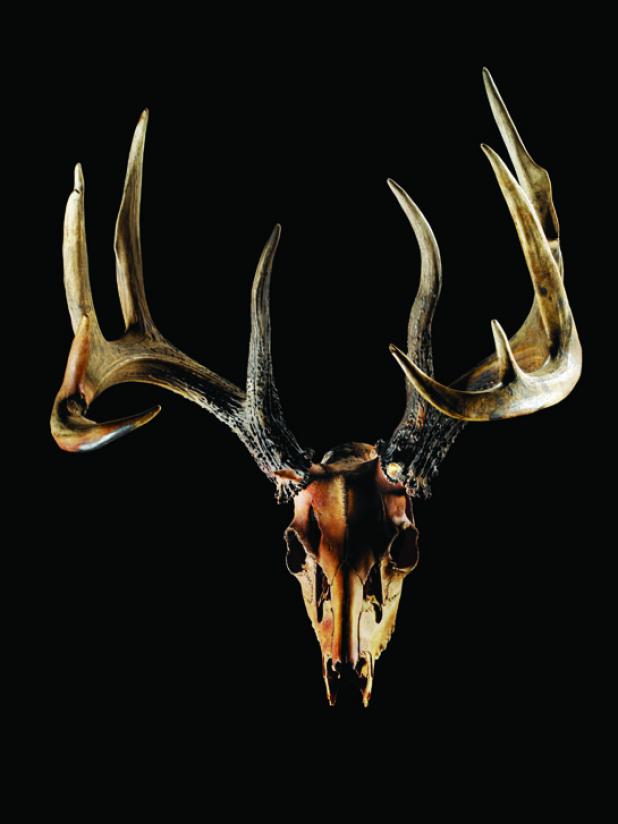 The skull looks a century old, even though it was pulled from an Iowa creek bed just six winters ago. The rack is stained orange by mud and black by water. There’s a deep muskrat chew in the fourth tine on the left. The bones of the face are like ocher rawhide. The teeth bring to mind an old river rat I knew–a man who slept with a chaw of Red Man in his mouth. When I tip the skull, sand, grit, and little white beads of bone rattle in the cavities and spill on my shirt.

I put this buck–probably the only net Boone and Crockett typical I’ll ever encounter–in that creek bed, and the knowledge of it has gnawed at me since.

I’d drawn a coveted Iowa bow tag, and my friend Steve invited me to hunt the sprawling property he manages for big whitetails. There was one little catch. Steve asked if I’d mind having a young Missourian named Jason film my hunt for a TV show. I’d done some video work in the past and had largely foresworn doing so again. But it seemed like a pittance to pay for access to some of the best whitetail real estate on the planet.

Jason and I gelled immediately. After four days of great action, we followed our headlamp beams to a new double-stand set, crawled up a pair of nestling white oaks, and pulled on warm layers as stars blinked between wispy, tailing clouds.

Hunting whitetails in Iowa is odd. You can sit waiting for the sun and feel no different than if you’d hung your stand in, say, Vermont. Then the first rays reach out and light up a thigh-thick cedar that looks as though it was barked by a chain saw. I was staring at such a rub when I heard a plodding shuffle. Through the brush, 100 yards away, I couldn’t see antlers–just a steer-size body walking out of my life. I hit the rattling horns and he turned.

When a mature buck comes to rattling, he resembles a strutting tom turkey, looking larger than life, with hairs bristled on the flanks, neck, and spine. And if in this state his antlers still look huge, I skip the mental measuring tape and reach for my bow. I was clipping the release onto the bowstring when someone whispered, “I’ve got him.” Startled, I glanced over to see a young man staring into a monstrous black thing. Since I’d first spotted the buck, Jason and his camera had vanished from my world.

I got my feet into position and drew back as the buck stiff-legged it to 20 yards. And right then, in a moment full of promise and adrenaline, I choked. I opened my mouth to grunt the walking buck to a stop, but nothing came out. Instead of regrouping, I panicked, punching the trigger as my sight pin hit the buck’s shoulder. The arrow flew high and back. For a nanosecond I was sure I’d whiffed. Then the broadhead struck the buck’s spine with a crack that dropped him where he stood. I’d just made a god-awful shot and, it appeared, been granted not only a pardon, but a Booner.

“Back to me! Back to me!” I heard Jason whisper excitedly. Suddenly aware of the camera again, I remembered that I was supposed to face the lens and give an interview that captured my excitement. I recall mumbling something inane. I think I also laughed, and maybe cried. I know I wiped a lot of stuff from my nose and from the corners of my mouth.

Jason was giving me a thumbs-up when I heard leaves rustle near the buck. I snapped my head around in time to see one back leg twitch, then settle. Although I’d never spined a deer before, I knew that a finishing shot was in order. But brush was in the way. “I’m climbing down to finish him,” I whispered to Jason fiercely and began tying a rope to my bow’s upper limb. My foot was dropping down to a tree step when he said, “Stay put. That deer isn’t going anywhere”–explaining that he needed to film re-creates while we had the exact light as when I took the shot.

This was the moment, I realize now, when everything went to hell.

I avoid conflict. Always have. Since boyhood, I’ve been praised for my easygoing personality, my ability to get along with everybody. But my go-along-to-get-along nature is both my asset and my curse. Every vein pumping blood to my predator brain told me to climb down and make the coup de grace, but I couldn’t force my feet down to the tree steps. I’d agreed to be filmed.

While I was mimicking my brief rattling sequence, the buck’s legs shuffled again. For a moment I had a shot. As I reached for my bow, his head was up slightly, his back legs twitching. Then the buck exhaled heavily, laid his head down, and was still. “He’s dead,” I heard Jason say, and I talked myself into agreeing. “Give me three more quick cutaways, and we’ll go down and look at him.” I stared long and hard at the buck and, seeing no movement, nodded my head.

I was drawing on an imaginary deer when the real buck started thrashing. I’d had enough. Jason was saying something to me as I lowered my bow and started down the tree, but I ignored him. When my boots hit the ground, I saw the buck make his feet, drag himself two body lengths uphill, then collapse. By the time I’d nocked an arrow, he’d risen and was staring at me. I shot through the only opening I could see, but the arrow deflected. Motivated, the buck dragged himself 10 yards, collapsed, and rose again. I nocked another arrow and walked at him, but he covered another 15 yards before sagging against a tree that blocked any shot.

Slipping closer, I saw an opening just as he struggled to his feet again. He made it 30 more yards before I could anchor. At full draw, he stopped to look at me. My arrow flew just under his chest. The buck’s hindquarters sagged as he tried to stay erect. I glanced at my quiver. One arrow left.

I rushed the deer. He made the field, pushing himself forward with just his hind legs and, when those failed, pulling himself with his fore legs. I trotted after him, struggling to keep him in sight. I lost him for a second as he hit the opposite wood line. But spotting him bedded again, I felt relieved–until I realized where he lay: at the edge of a steep bank that dropped off to a creek bed. One lunge would put him over the edge.

I breathed deeply, focused, and lined up the 50-yard shot. The arrow looked perfect, arcing toward the buck’s chest as he heaved himself over the embankment. I ran to the dropoff, expecting to see him dead in the bottom. But he was gone. We looked for hours. It was as if, in regaining his feet, the buck had also found wings.

Two months later, while trapping muskrat along the same creek on a bleak January day, Steve’s son Isaac found the grim skeleton of a monstrous 10-point buck, half buried in the sand. He and Steve knew exactly what deer it was. Not long afterward, I held the weathered skull in my hands, just like I am holding it now–and the feeling is the same.

In a crystalline moment on a November morning, I knew exactly the right thing to do. And with an animal struggling, I failed. It’s not like I don’t have other failures, but those have no totems to burn them in. If I were an honest man, I’d bleach the skull, clean up the antlers, and hang this magnificent buck on the wall with all the others just outside this dim little room. Instead, I put the skull back on the workbench near the bins of dirty laundry–and close the door behind me.