I spent nine hours photographing this bull in western Canada, and he never once showed any sign of aggression. The... 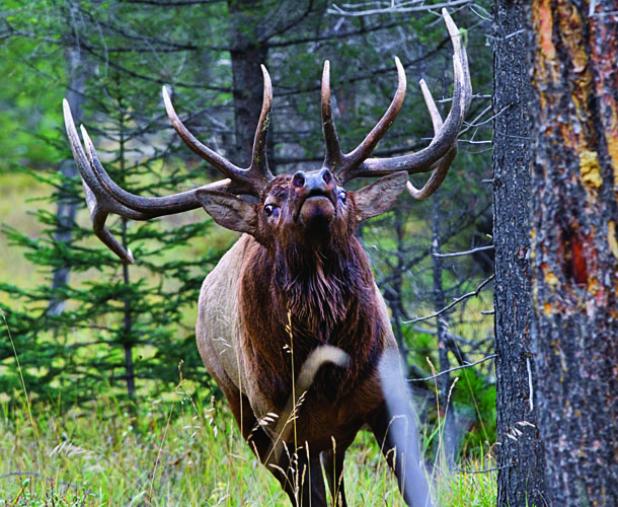 I spent nine hours photographing this bull in western Canada, and he never once showed any sign of aggression. The next day, though, the day I got this shot, he turned the switch. This was him charging me the first time. I took a few shots before I turned around and ran like hell. I spotted this partially fallen tree and figured that if I could put the trunk between us, he’d stop. And he did. After I caught my breath, I started shooting again but kept my distance. About an hour and a half after the charge, there was this perfect moment when the sun popped out and steam was rising from the ground as he sniffed along. I found a shooting lane in front of him. He took a few steps and unleashed this bugle that felt as if it went right through me. Then he charged again.

I bolted down the narrow lane but stopped after about 150 feet, because there, 30 feet in front of me, was a raghorn bull. I turned and saw the other bull about 75 feet away, coming full bore. Oh, s–t! The lane was so tight I really had nowhere to go, but I tried to flee perpendicular to the trail. I didn’t go 4 feet before I slammed into a sapling and fell down. As soon as I hit the ground, I screamed. I thought the bull was going to kill me. I rolled on my back so I could be in a position to kick him. But he rushed right by me for the raghorn.

I walked over to a log to sit and digest what’d happened. I was in so much pain. When I fell, I landed right on top of one of my cameras–and I’m a big guy, 220 pounds. My chest hurt so bad that I thought I’d broken my sternum, but the doctors would tell me later on that I’d just bruised and battered my ribs. And miraculously my camera still worked.

I went back out and photographed that bull for four more days. But, boy, I gave him plenty of space.