Close Call: How a Deer Hunter Survived 23 Days in a Manitoba Forest, Lost and Without Food

Brad Lambert, 46, survived 23 days in a Manitoba forest without food. It started like many of my other hunting... 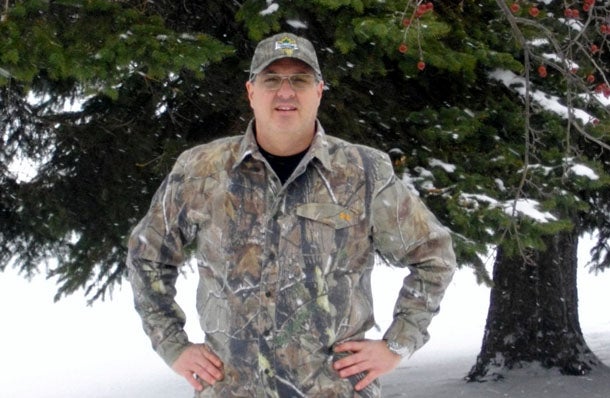 Brad Lambert, 46, survived 23 days in a Manitoba forest without food.

It started like many of my other hunting trips. The morning of Nov. 15th, I drove my black Ford F-150 pickup truck to Marchand, Manitoba, about 50 miles south of my home in Winnipeg, to check out a few hunting spots in the forest near town. I didn’t get a single shot at a deer all morning, so I drove back into town, had a bite to eat at the local hotel, and overheard some folks talking about hunting deep in the Sandilands Provincial Forest. I decided to check it out.

I bought two sandwiches and an apple before leaving Marchand. I already had extra water, warm clothes, and my rifle in the truck, and the gas gauge indicated that I had half a tank. My plan was to scope out a good spot, sleep a few hours in my truck, wake up at dawn, and hunt. I felt prepared. I expected nothing more than to return home to my wife and son the next day—hopefully with a whitetail deer in tow.

It was late afternoon as I drove south into remote country. Fewer and fewer houses appeared by the road, and I lost cell phone service. I had driven at least 50 miles when I turned off the road to follow the snowmobile and quad trails that were wide enough to accommodate my truck.

About four miles down a trail, I was stopped by timber across the road. I put my truck in reverse, but the wheels slowed and stuck, apparently in an icy, muddy bog. I tried everything I could think of to get out, but by now the truck was stuck in mud up to the bottom of the doors. With light already falling, I decided to stay the night where I was and run the heat in intervals.

In the morning, I retraced my route on foot, but didn’t want to wander too far from where the truck was stranded. I’d always heard that if you get lost in the woods, you should stay with your vehicle until someone realizes that you’re gone and comes to get you. So I backtracked only as far as I felt I could without getting lost. I didn’t see another soul—I was surrounded by dense forest and there were fallen logs across my path.

Back near my truck, I worked up a sweat gathering kindling for a fire. I knew I needed to strip off my clothes and let them dry by the fire before I got too cold. It was in the 20s that day and would fall below zero degrees at night. I ate my apple and slept fitfully in the truck. Another day passed and no one came.

The next morning, I could hear planes flying low overhead, and I thought maybe they were looking for me but couldn’t see through the treetops. I also heard shots in the distance, but I was worried that in the thick timber I might get caught in the crossfire from another hunter’s gun, so I fired back a few signal shots. I stuck to a daily routine. Wake up early. Build a fire to melt snow and drink water. Walk to an opening in the trees that expanded into a meadow. Sit, watch. Wave my blaze orange vest at the passing planes.

I ran my truck a little bit at night, until the battery died. I was never able to sleep for more than an hour or two at a stretch, and instead focused on the task of staying warm. I stayed as hydrated as possible, and tended my fire. I thought it would be just a matter of time before someone would find me.

Five days in, I started fantasizing about food. I imagined a waiter asking for my order. I asked myself out loud, “Any thoughts of breakfast this morning, Mr. Lambert?” I pictured a three-egg omelet with mushrooms, coffee, toast, and orange juice. I thought about my family eating their breakfast and worrying about where I was.

That’s what kept me going. Thinking of my family kept me moving. It kept me sane—reasonably sane. Every day I just stuck to a routine of building fires, and walking out to the meadow to try to flag down rescue helicopters.

The morning of the 22nd day, I knew I was getting too weak to go on much longer. I packed my backpack with brush for a little extra insulation, and left the trail to walk due west and south. I thought I’d seen a flashing light in that direction, and I hoped to use it as a guide. I left behind my rifle, too heavy to carry in my current state. [Besides, I was out of ammo anyway.] I had started with 35 rounds of .30-06 ammunition, but I’d fired it all to signal anyone searching the woods.

The brush was thick. I had to push through it, stopping often to catch my breath. It was slow going. I slept on the ground that night and awoke to a little early morning snow. I continued to head south. My feet were aching. The sharp cold made it even harder for me to breathe, and I was lightheaded and exhausted when I pushed through to a worn ATV trail. I walked along that path for a third of a mile before I ran into fallen timber. Once I’d climbed over this roadblock, I saw that the trail converged with another one up ahead, and at this intersection, a hunter had recently used a makeshift tree stand. My spirit lifted. That was a beautiful sight.

I continued on the trail until it met up with a road. Here, I fell to my knees. I was just emotional and grateful to see signs of humanity again. My phone was dead, but I knew I would find someone soon. It was Dec. 8—23 days since I’d left home.

Eventually, a gentleman in a pickup truck came down the street, and I turned and flagged him down. I told the driver my story and he said he’d heard of me. There had been a huge search effort all this time. I climbed into his truck, and he drove me back to the grocery store where I’d started in Marchand—the last place I’d been seen. The clerk gave me a sandwich, a sports drink, some peanuts, and cigarettes. I called my wife from the store and tearfully told her I was OK. The man drove me home to her.

Hugging my wife and son again was incredibly emotional for me. We embraced for several minutes. My wife and her sister, who had come to help take care of my family throughout my ordeal, told me about how many [people] had tried to find me—how the Royal Canadian Mounted Police Search and Rescue team, the Winnipeg Police, and the Civil Air Search and Rescue Association had been conducting searches by land and air. Friends and family had spread the word, and complete strangers had gone out looking for me. My wife said that after two—then three—weeks, it was hard to keep up the hope that she would see me again. It just seemed so unbelievable. She said that everyone had been very kind and supportive. We are both so grateful for the concern and generosity of our community.

I could have just sat with my family for hours, but my wife thought it best to get me checked out at the hospital. We were in the emergency room all afternoon and evening, running tests and getting my blood work done. I had lost about 40 pounds. I was thin, exhausted, and bearded, but I was going to make it. Doctors told us that my cold toes and fingers would regain circulation.

Local law enforcement met us at the hospital, and I told them the story of what happened. Later, I went in for a more formal interview. People have doubted my story, but local investigators have closed my case after checking through the facts. The insurance company had to retrieve my truck, which they found in the same spot, still stuck in the mud. My wife recognized how much weight I’d lost and how emotional I was—I had been through a lot and was more than grateful to be back home. I don’t plan to hunt alone again. I think about it differently, now. I’ll hunt only in familiar woods, and I intend to buy a satellite phone. And I’ll always carry extra fuel and food from now on. —As told to CJ Lotz