Gun Dogs: A Game That Will Turn Your Pup Into a Retrieving Machine

Once your dog is reliably coming, going, and stopping, it’s time to move on to some more advanced training. Think... 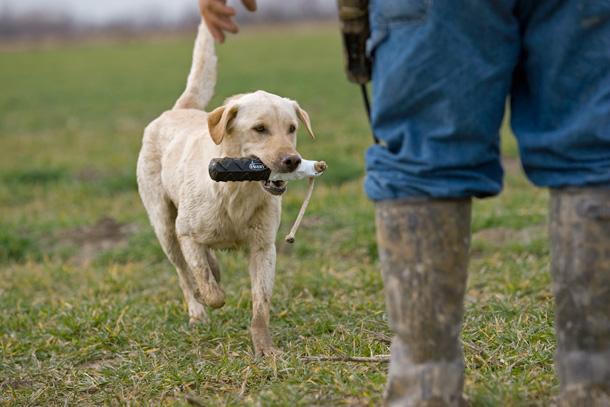 Once your dog is reliably coming, going, and stopping, it’s time to move on to some more advanced training. Think of “Around the Clock” as skeet for your dog. He retrieves along different angles, shags doubles and triples, and practices blind retrieves. “With a buddy and his dog, you can do a lot of work in a short amount of time,” says Cabela’s pro staffer Jennifer Broome (quinebaugkennels.com). Here’s how to play the game:

Face Time
First, you’ll need to work with a hunting buddy and his gun dog. Find an open field and imagine it as a clock face. Stand with your dog at 6 o’clock and have your buddy and his retriever positioned in the middle of the clock, about 20 yards away. “Have your dogs under control and in the heel position,” Broome says.

Opening Toss
Have your buddy throw a white bumper for your dog to 3 or 9 o’clock. “You’re building confidence here with a few easy throws,” Broome says. When your dog is going right to the downed bird, move the throws to 10 or 2 o’clock. After a few tosses, it’s your turn to throw for your buddy’s dog.

Triple Threat
Once both dogs are nailing the retrieves, throw out doubles and triples. Here, the go commands from last month’s column factor in. “The dog should retrieve the last bird to fall first,” Broome says. “It’s closest to memory and in a multiple retrieve scenario, you want the first retrieve to be a success.”

Like Clockwork
Switch to an orange bumper for blind retrieves. (Dogs can’t easily distinguish orange from field colors.) Turn your dog’s back to your buddy while he tosses bumpers. When both dogs are working around the clock, stretch the distance between handlers and try different terrains. Says Broome: “Variety is key.”