Get the Most Out of Your Spring Turkey Season

Spring arrives in a mad rush, and I’m never quite ready for it. One day there’s a lone daffodil in... 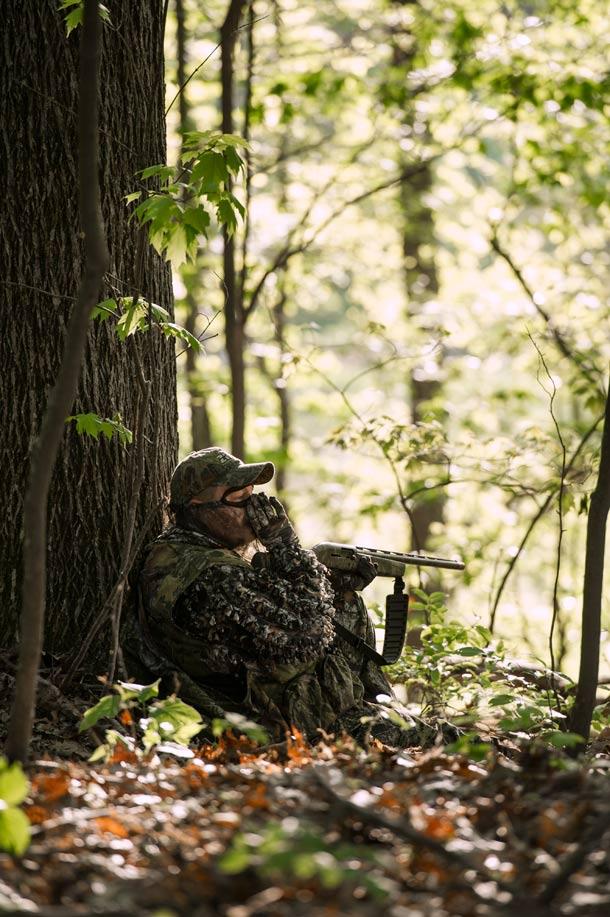 Spring arrives in a mad rush, and I’m never quite ready for it. One day there’s a lone daffodil in the woods by the old brick chimney, and the next, it seems, cicadas are calling and summer is in full swing. Blink, and this season slips by like a rainbow trout nudging downstream after a sloppy cast.

It’s a time of year that makes me think of the old turkey man, R. Wayne Bailey. How that man loved the sound of a gobbler. For more than four decades he trapped and relocated wild turkeys across eastern America. He was 83 years old when I hunted with him last, but Bailey’s hunting days, like his days on this earth, were coming to a close.

We started off in the dark, in the corrugated folds of North Carolina woods in the full glory of late April. I stayed close, lighting fallen trees with my headlamp, clamping barbed wire down with a boot so Bailey could cross. Then, after capping a timbered ridge, he took out an ancient box call and began to play. Almost immediately, two gobblers answered. I tightened my grip on the shotgun. A third tom joined the fray, thundering a challenge. None of the birds was terribly close, but they were close enough to send my heart into my throat, and close enough to work.

After a curious, silent minute, I heard rustling behind me. Bailey was pulling himself upright. He called over. “Well, thought for sure we’d get a bird going here,” he said. “Let’s try another spot.”

When I shook my head and gently told him of the three birds that answered his yelps, the look on his face, stubbled with white whiskers, nearly broke my heart. The old man could not believe that a turkey gobble had passed him by. A few minutes later, as we made our way downhill, I glanced over my shoulder to see Bailey with his hearing aids in his hands. He was fidgeting with their tiny dials, desperate to turn back time. I knew what he was thinking: Give me one more day in the April woods. Let me hear a wild turkey again. But the spring of his own life had forever passed.

Listen Carefully
A year ago I finally bent to the pleas of family and friends and bought fancy digital hearing aids. Hearing tests I’d taken revealed the steep midrange dropoff—common to shooters who scoffed for too long at muffs and plugs—but that hard data only confirmed what I already knew. I could barely hear a mallard chuckle. Soft hen yelps were lost to me.

The first time I walked through the woods with what equates to a pair of laptop computers lashed against my brain, I could not believe my ears. Footsteps in dry leaves sounded like explosions of breaking glass. I tossed rocks into a creek, over and over, like a child. I could hear each water droplet tinkle on the surface.

It was spring, and migrating warblers fed in the treetops. Each chirp and trill was clear and crisp. I could pick out even the fainter chip notes and whistles. I was astonished—and saddened. Had I been missing all of this? And if so, how many ducks had passed overhead on whistling wings, unheard? How many deer had tiptoed behind my climber? And how many turkeys had answered my calls—and wandered off elsewhere when they never heard a reply?

A few days later I found my way deep into swamp woods bordering a blackwater river, with dawn light seeping through cathedral woods. When the gobbler went off he was right on the edge of hearing, his breeding bellow little more than a wrinkle in the mist. I never saw the bird, but a week earlier, I wouldn’t even have heard him. I wouldn’t have sat still and quiet in the April woods, each gobble filling in the picture in my mind—somewhere out there, an old tom worked the dark cypress bottoms, bright blue head and crimson wattle shaking like a fist. I could see it all, now that I could hear him. And I thought of Wayne Bailey, of course, and that look in his gray-blue eyes.

I can feel them already, these days sliding by like water that spills from a cupped hand. I want every drop of spring. Every redbud bloom, every bedding bluegill, every quail call and turkey gobble. I’m selfish, come April, without apology. There’s not a moment to miss, and not a minute to waste.