Like lots of early season hunters, Shane Sanderson has often patterned trophy whitetails in the last weeks of summer, only... 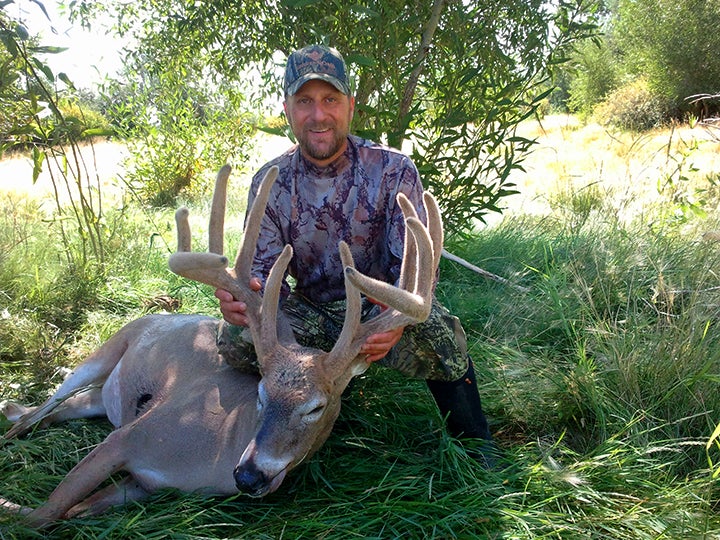 Like lots of early season hunters, Shane Sanderson has often patterned trophy whitetails in the last weeks of summer, only to have them disappear come opening day. But he executed his opening gambit perfectly on the archery opener (Sept. 1), shooting a 170-inch typical, which earlier this month was unveiled as Wyoming’s state-record bowkill buck.

Sanderson, of Kinnear, Wyoming, had been watching a pair of shooters on the family ranch when an even bigger buck showed up Aug. 1.

“He just dwarfed the largest of the deer I’d been watching, which was in the high 150s,” Sanderson says. “I knew right away this was the buck I was going after.”

After tracking the deer through his spotting scope three or four nights a week, Sanderson decided to erect a ground blind near a field corner that bucks consistently used to enter a grass field. Because deer were using the field as a staging area before entering some adjacent alfalfa fields to feed, Sanderson was betting he could get a shot at the buck well before sunset.

He arrived at the blind around 5:30 p.m., spooking several deer that were already in the field. An hour later he spotted the original pair of shooters he’d been scouting all summer. Ten minutes later the big boy himself showed.

“He stood in the fence line in thick brush and watched the field awhile, then he jumped the fence into the field about 35 yards from me,” Sanderson says. “He was facing straight on so I had no shot. But after a few minutes the other deer in the field started running around, and he finally turned and gave me a shot–and I took it.”

Sanderson, 39, has hunted most of his years, the last 13 of them with a bow. He has shot bucks he estimates would score in the 140s, but he never entered them in the record book.

“I don’t look at that stuff a lot, and I didn’t even know what the state record was,” he says. “But after I talked to the taxidermist and put a tape to the rack, he said I ought to start looking into the record.”

But first, he had a difficult decision to make.

“I’ve been after a velvet buck since I started hunting, and this is the first one I’ve got,” Sanderson explains. “I’d have to strip it just to get it into the record book. It took me a long time to decide whether I wanted to do that. I finally figured, yeah, this is a buck that people should know about.”

The scoring delay explains why Sanderson’s opening day trophy, which netted 170 3/8 inches in the Pope & Young record book, was only recently announced as the new state record.

“The taxidermist has had a lot of people going in to look at the horns, and they’ll ask if someone ran back to Iowa or somewhere in the Midwest and shot a buck,” Sanderson says. “They’re surprised. People just can’t believe this was a Wyoming buck.”