How an Expert Trapper Catches Huge Snapping Turtles in Indiana

When Bill Haywood was 10 years old, he was trapping snapping turtles that weighed more than he did using traps... 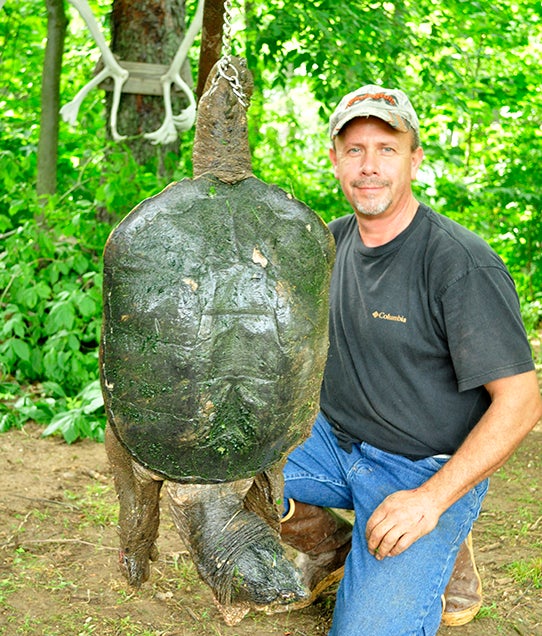 When Bill Haywood was 10 years old, he was trapping snapping turtles that weighed more than he did using traps he built, local bait, and self-taught techniques. Decades later, he’s teaching his 16-year old son Canaan all he’s learned and is seeing more success than he ever did trapping solo. On Memorial Day weekend, acting on his trapper’s instincts, the duo caught the largest snapper Haywood has seen in 17 years–one that could claim the title for largest living snapping turtle.

Raised in rural Indiana, Haywood says his lifelong fascination with snapping turtles began with stories from his grandfather; folk legends replete with massive snappers, unconfirmed sightings, and nicknames like The Beast of Busco.

“I heard my grandpa tell a story of a giant turtle in Churubusco, Indiana. According to him, this farmer claims he saw a huge turtle that weighed hundreds of pounds. Word spread, and people came by the scores to try to find it,” Haywood says. “They named it Oscar, and newspaper reporters, scuba divers, and fortune seekers went looking for it. But in the end, nobody found it, and the farmer nearly went broke trying to find the turtle… I think he ended up draining the lake but there was no sign of it. The story actually became part of the town’s identity–it has a statue of a turtle, and they have a Turtle Days festival every year.”

Without access to some of the farm ponds, Haywood learned to trap on public creeks and rivers. Though he now has access to several properties, he still builds his own traps and uses the same techniques he did as a kid.

“I build traps out of 12 gauge horse fencing so they’re three feet wide, five feet long, and two feet deep with an entrance at one end and place it shallow enough so a trapped turtle can breathe, otherwise they drown. Anyways, Indiana state law says the opening of the trap has to be above water level. Turtles find their way in, but have trouble finding their way out,” Haywood says.

“For bait, I think carp work the best. I put them in gunny sacks and drop a few in the freezer. Once they’re frozen, I chop one up with an ax and hang big chunks in empty coffee cans on the inside of the traps. As the carp thaws, the oil seeping from the meat really draws the turtles in. One 20 pound carp is enough to fill up about six traps.”

Most people wince at the idea of oily carp and catching or handling something as unattractive, or as dangerous as a snapping turtle. But Haywood, who’s also an avid hunter, says turtle trapping offers a great reason to get outside, and those that cringe at the idea, probably don’t know turtle makes excellent table fare.

“I trap a lot of muskrat, beaver and mink, and I big game hunt. But in the middle of the summer, there’s not a lot to hunt or trap, so I just trap turtles,” Haywood says. “Turtle meat is very tasty. I like to brown it in a skillet and eat it with gravy. Other people put it in a pressure cooker or make soup; however you do it, it’s really good. I keep some of the turtles that are 20 pounds or bigger. But there are still a lot of old timers around here that still love to eat turtle. I just go around and give a turtle to whoever wants one.”

While he enjoys it, Haywood points out trapping isn’t without its share of danger. Along with its hard shell, the business end of a snapping turtle is its best defense.

“It was only a matter of time before one clamped down on my hand. One bit me so hard the beak punctured through my hand and ripped off a big chunk of skin. I have a nice scar to remember that one,” Haywood says. “Once they bite down and realize they have flesh, they start pulling their head back into the shell and they don’t let go. It’s excruciating, but there’s nothing you can do. You can’t get loose. You just have to wait until they let go.”

Aside from the taste of turtle meat, returning home with all his fingers, and the sense of accomplishment from hanging a trophy turtle shell among his big game trophies on the wall, Haywood says he likes the challenge of it all, and each time he ventures out, he tries to trap a turtle that beats his personal best of 43 inches in length. It’s a record he hasn’t topped in 17 years.

This past Memorial Day weekend, accompanied by his son Canaan on their first father-son trapping outing, Haywood was finally able to break that record.

“I told [my son] my goal has always been to beat that personal record,” Haywood says. “That Friday before Memorial Day, we caught a 38 pounder that was 44 inches long, so we did what we set out to do. I jokingly said ‘take a good look at this turtle, cause it may be 17 years before you see one bigger.'”

But the next morning, in a new lake they’d never explored before, they did.

“I love trapping turtles around beaver lodges. That’s where you find the big ones. This place just looked like perfect turtle habitat. I just had a feeling about it,” Haywood says. “Tag teaming that turtle was just a great father-son experience. There were three or four other turtles in the trap with it, and when we started getting it out of the water, the big one started tearing that trap apart. I think the trap weighed over 100 pounds, and in the confusion, I accidentally knocked my son out of the boat trying to load it.”

Some states recognize record turtles, but Indiana is not one of them. However, Haywood did a little research and had the animal measured by a certified herpetologist. From what he can tell, his recent catch is one of the biggest on record.

“The shell was 19.62 inches long, but the turtle’s total length was 50.87 inches from nose to tail,” Haywood says. “There was one in Massachusetts with a 19.8 inch shell, but I think it died about three years ago, so my understanding is this could be the largest, living, wild snapping turtle on record. I’m not sure if that will ring true if I let it go, but I’m trying to find out. I still have the turtle [alive], and I can’t keep it forever.”

Haywood laughs knowing that as quickly as he helped his son set the bar to judge future turtle catches, he helped him raise it, but insists even if it takes another 17 years to break his personal record, he’ll enjoy every second of it.

“So far this year, my son and I have been trapping three weekends and have got 123, which came out to 1,400 pounds of turtle,” Haywood says. “We just enjoy it. It’s simple fun, and that’s sometimes hard to find.”