See a story update here. No single innovation has had a greater effect in the last two decades on how... 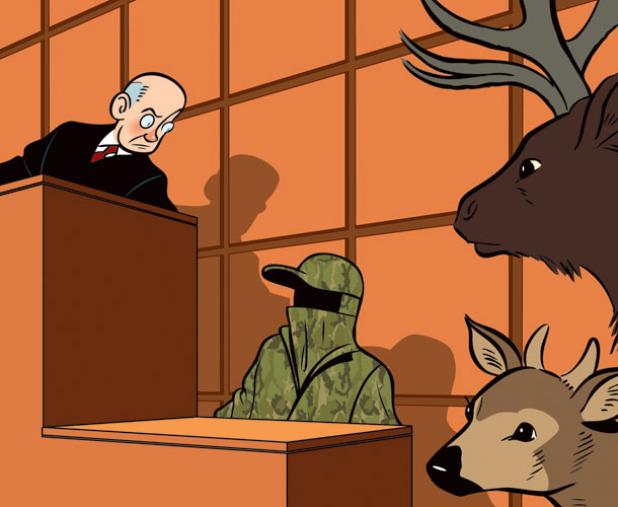 No single innovation has had a greater effect in the last two decades on how whitetail nuts hunt than Scent-Lok clothing, made by ALS Enterprises. Billing itself as a scientific-based company with extensive laboratory testing to back its claims, the clothing giant has for years told hunters that its product eliminates human odor. Now a Minnesota district court judge has determined that that is not true.

In May, Judge Richard Kyle’s summary judgment ruling found ALS liable for falsely advertising its activated-carbon clothing. The ruling capped nearly three years of litigation resulting from a suit brought by Minnesota hunters Mike Buetow, Gary Richard Stevenson Jr., Joe Rohrbach, Jeff Brosi, and Dennis Deeb, who purchased carbon-activated clothing and felt it did not perform as promised. Also named in the suit are Cabela’s and Gander Mountain, which either sold Scent-Lok products or used Scent-Lok patents under license.

Judge Kyle’s decision allows the plaintiffs to proceed with a jury trial, where they can seek damages. It also allows seven other class-action suits to proceed against ALS–and has the whitetail world abuzz.

The Hearing First, this ruling does not address whether Scent-Lok clothing improves success in the field. Rather, it deals with two questions: Did ALS claim that its product totally eliminates human odor? And does it?

Starting with the second question, the defense pointed to its own laboratory tests in which garments containing Scent-Lok were able to block 95 to 99 percent of a high concentration of odorants. The plaintiffs’ counsel argued these were “closed system” tests, and, in essence, that hunters do not hunt inside sealed beakers.

The efficacy of Scent-Lok in an open environment was explicitly addressed when onetime Scent-Lok consultant and activated-carbon expert Dr. Amos Turk was called to testify. Turk was asked to inspect a swath of Scent-Lok fabric, which the plaintiffs’ experts had concluded had only 23 percent carbon coverage. Turk agreed that odor would pass through the gaps:

The plaintiffs also introduced tests showing that up to 90 percent of odor trapped by Scent-Lok fabric is released when exposed to open air. They argued that Scent-Lok’s own tests conducted in 2006 show that activated carbon has a poor adsorption rate on certain odors, including, notably, underarm odor–and that the reactivation of the carbon could be achieved only to less than 20 percent. F&S could not verify the results of Scent-Lok’s 2006 tests, as ALS declined our request to see them. In the end, although the judge ruled for ALS on the question of partial reactivation, the defendants could not dispute that their product did not totally eliminate odor because the company’s own experts agreed that it did not. So the question became: What precisely did ALS claim?

Here, the plaintiffs’ counsel presented claims stated in the defendants’ promotional material about their self-described “odor–eliminating technology,” including:
– “Activated carbon fabric (the only stuff that works on 100% of your scent 100% of the time) adsorbs and traps any human odor before it can escape.”
– “Once [air passes] through the suit, the air no longer contains human odor.”
– “Go out in the field completely scent-free.”

The defense argued that the meaning of the word “eliminate” is open to interpretation. In testimony, the ALS vice president of marketing, Mike Andrews, was asked for his:

In the end, Judge Kyle ruled that “eliminate” means completely eliminate–and that many of the defendants’ claims are literally false as a matter of law.

When I asked Andrews whether ALS regrets having adopted advertising language claiming 100 percent odor control, 100 percent of the time, he pointed out that it was used in only one ad, which was quickly pulled, and offered this statement:

“We feel that the judge has settled on a narrow interpretation of the word ‘eliminate.’ Scent-Lok products help hunters get close to deer, which is exactly what they were designed to do.”

The plaintiffs’ counsel, Tom Leach of Merchant & Gould, says his clients are very pleased. “Hunters have a right to trust that an outdoor company’s statements are accurate. We look forward to the trial where a jury will see the evidence of what little this product actually does.” ALS has promised to appeal, and the question of how well the clothing works in the field will be argued as the trial goes forward. ALS can still be vindicated. But it will have to deal with the p.r. nightmare sure to come, as the upcoming trial promises to include some daunting accusations. For example, the New York complaint charges that “Defendants…concealed evidence that the outdoor writers and hunters paid by ALS to promote its odor eliminating clothing were, themselves, complaining…that the products failed to perform as advertised.” Already deposed is well-known hunter Myles Keller, who when asked if Scent-Lok works in the field, replied flatly: “No.” ALS will undoubtedly contest much of this, but it will be out there.

Meanwhile, the May ruling is sending shock waves through the hardcore whitetail world. Chat rooms are buzzing with Scent-Lok believers rushing to stand behind the company and nonbelievers saying, “I told you so.” There are cries of “frivolous lawsuit!” as well as some villainization of the plaintiffs. Garments with Scent-Lok technology may indeed help hunters. But if you must pick a villain in this fight, I’m not sure how you could pick the hunters who brought suit, especially when they have nothing to gain but the price of their Scent-Lok outfits. ALS painted itself into a corner with at least some claims it now acknowledges were untrue. Consumer protections against false claims apply to virtually every kind of product. If you believe as I do that hunters’ interests are just as valid as anyone else’s, then consider this ruling a win for us.

Scent-Lok by the Numbers
Year in which ALS sold its first Scent-Lok garments: 1992
Year that researcher John A. Shivik published an article in the Wildlife Society Bulletin concluding that scent-adsorbing suits had little effect on hiding human scent from tracking dogs: 2002
Annual sales of Scent-Lok clothing by ALS in 1992: $140,000
Annual sales of Scent-Lok clothing in 2006: $100 million
Percentage of price markup for Cabela’s Leafy Wear Pro II camo outfit with Scent-Lok fabric ($199.95) vs. without ($99.95): 100
Number of Scent-Lok garments owned by Field & Stream staff editors: About 20
Percentage of Minnesota hunters recently surveyed by Scent-Lok who said they were “satisfied” by the performance of the product: 80

From the August 2010 issue of Field & Stream magazine.