What the Horse Saw: How I Went West and Ended Up in Women’s Clothes

As a 21st-century outdoorsman, I’m constantly redefining what it means to be manly. Frequently, it involves using products originally developed... 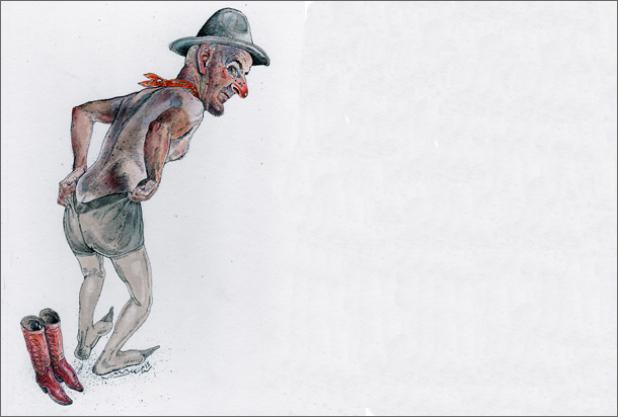 As a 21st-century outdoorsman, I’m constantly redefining what it means to be manly. Frequently, it involves using products originally developed for women. On a late duck hunt some years back, my lips got so chapped it felt as if they’d been attacked by an orbital sander. The day was cold, with winds gusting to 30 mph. If I pressed my lips together, I could practically hear them cracking. One of the men in the blind had brought his wife along. I asked if she happened to have any lip balm. She didn’t. But she volunteered that she did have lipstick.

“That’ll work,” I managed to croak. “Pass it down.” The lipstick came in a little gold tube about the size of a 28-gauge shell, something you wouldn’t expect to be a cause of discomfort. I guess context really is everything, however, because these guys looked like they’d rather have been handling a water moccasin. When the lipstick reached me, I smeared some on. The relief was instantaneous and complete. I was back in the game, scanning the sky for birds. I still don’t know what was in that lipstick, but it beat anything I’d ever used on chapped skin. Meanwhile, the other guys looked at me and howled. One asked if I was free Saturday night. Out of curiosity, I asked my benefactress the particular shade of the lipstick.

In a photo from the hunt, I’m the smiling guy in muddy camo, a three-day beard, and pink-voltage lips. The picture explains why the guys laughed, of course, but it also validates my decision. In it I’m smiling, and that’s because the lipstick worked. And maybe it’s just me, but I think I looked like the kind of bald, outdoorsy transvestite that any guy would be happy to introduce to his parents.

My latest foray into repurposing girl stuff came on a fishing trip–described here–where I found myself buying pantyhose in Lander, Wyo. The day before we rode horses up into the Wind River Range to go trout fishing, our outfitter, George Hunker, warned that our legs could get badly chafed if our jeans didn’t fit right. I hadn’t been on a horse in so long that I couldn’t remember what constituted the right fit. George said that the best insurance was a pair of pantyhose. At first, I thought he was kidding. He wasn’t. “Heck, enough guys buy them that we sometimes call ’em mantyhose,” he said. While you probably wouldn’t guess it from my appearance, I’m as proud as the next guy. On the other hand, I’m strongly opposed to physical discomfort. If the choice is between five hours of pain and feeling silly, my priorities are clear.

Back at the motel, I asked Michelle if she was considering buying pantyhose. “No, I’ve got those SmartWool long johns of yours,” she said. “I’m good.” I had lent her those to hunt deer in last winter. Unfortunately, she’d loved them. By the unwritten-but-universal rules of Lending Gear to Your Girlfriend, they had become hers. She was kind enough to offer to purchase pantyhose on my behalf. We’d been in Lander for less than 24 hours, but it’s an honest-to-God Western town, a place where cowpokes still sometimes ride their horses into the local bar to order a beer. Either the atmosphere was already rubbing off on me or it was the altitude. In any case, I decided that there were some errands a real man didn’t farm out. And buying pantyhose was one of them. Striding across the sun-blasted asphalt between the motel and a nearby dollar store, I flashed on Gary Cooper in High Noon. Like him, I was alone and headed into a potentially hazardous situation. Like him, I had no option but to see it through. I pushed my way in and found a saleslady.

“What size would you be wanting those in, sir?” she asked.

“Taupe.” I managed to pronounce the word as if it were a brand of whiskey rather than a color.

“Reg’lar,” I said, dropping the middle syllable. (What’s with you? I wondered. You’re buying panty-hose, not a new set of spurs.)

“Sheer or opaque?” she asked.

I gave her a weary smile. I could see exactly where this little game was headed. We both knew that no real man would be caught dead in sheer pantyhose. “Opaque’ll do just fine,” I said. My purchase folded under one arm, I strode back out into the afternoon sun. The pantyhose worked like a charm and turned out to be one of the smartest moves I’ve ever made. Just remember that you don’t want control top and you do want opaque. Otherwise some people might question your masculinity.