Photo by Andrew Hetherington Finding a 400-yard rifle range can be a problem, so instead we’ll go with a homemade... 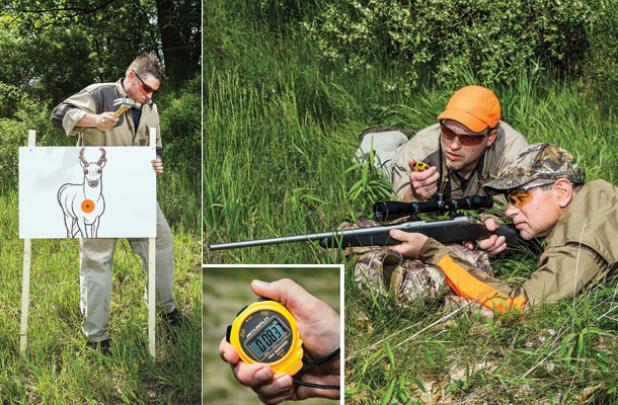 Finding a 400-yard rifle range can be a problem, so instead we’ll go with a homemade half-life-size pronghorn target that you can use at shorter range. A pronghorn measures roughly 15 inches from spine to sternum, so your target should have a chest that is 8 inches deep. But you’re not going to shoot at the pronghorn broadside. Draw the animal facing you almost head-on so you’ll be shooting at the front of its chest, with a bit of shoulder thrown in. The bull’s-eye should be no bigger than your fist.

The Challenge
You have to shoot prone, and you can use a bipod or a sling, or rest your rifle over a backpack. No cartridges larger than 7mm are allowed; there is no limit on scope power. There are, however, a number of catches:

First, almost all the pronghorn country I’ve seen looks flat as a board but in reality is quite broken, with ravines and washouts everywhere, and the smart shooter takes advantage of this by crawling on his belly like a serpent, out of the line of sight, thus turning a long shot into a short one. So you have to low-crawl for 100 yards before you get to shoot.

Second, most pronghorns are missed because hunters think they’re much farther away than they are, and aim too high. So a friend has to place the target for you at an unknown distance.

Third, you can count on the wind blowing and the mirage boiling, so you have to shoot on a day with a 10-mph wind at minimum, and at least 70 degrees so you’ll have lots of mirage to spoil your sight picture.

You get three shots. Once you lock and load, you have 10 seconds to get the round off or it doesn’t count. Two of your shots have to hit the bull’s-eye.

Increase the distance to the target by 50 yards. (or, during the low-crawl phase, have a rattlesnake placed in your line of travel.)