Photo by Andrew Hetherington The dove that zips straight over your head from behind with no warning is one of... 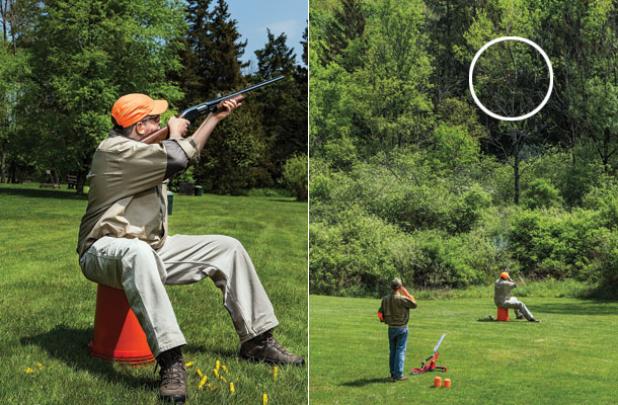 The dove that zips straight over your head from behind with no warning is one of the trickiest shots on the field. Teal and wood ducks pull that same move, too, as do unseen grouse flushing out of trees.

The Challenge
Shoot from Low House 1 on the skeet field, but sit on a 5-gallon bucket with your gun unmounted and pointed in a safe direction. If you don’t have access to a skeet field, have a friend with a clay-bird thrower stand behind you (with a barrier between the two of you to protect the shooter from errant throws). Load two shells in the gun.

Call “Pull.” If the field has a delay switch, use it. Otherwise have the puller throw the target anytime between zero and three seconds after your call. You can shoot twice at this target, which requires a slight lead underneath. You should see the whole target over the gun when you pull the trigger. Hesitating, double-checking, or measuring the lead is a sure way to miss over the top.

If you shoot a lot of skeet, you should get at least eight of 10. If you’re not a skeet shooter, anything over 50 percent is good.

Tell the puller when your gun is loaded with two shells and you’re ready. After that it’s the puller’s choice when to throw the target and whether it comes from the high house instead of low. If using a hand trap, the puller can decide to throw a double.

The classic dove gun is a 20-gauge semiauto with an Improved Cylinder choke. A Benelli M2 20-gauge would fit the bill perfectly here.