Photo by Andrew Hetherington When I was young, a favorite pastime for my friends and me was walking up cottontail... 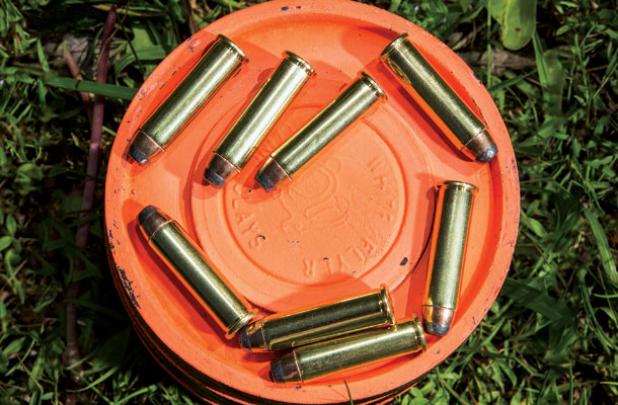 When I was young, a favorite pastime for my friends and me was walking up cottontail rabbits with .22 rimfire handguns. A good snowfall made it even more fun, because that would enable us to occasionally track a bunny right up to its bed. Still, a running rabbit is no cinch to hit.

The Challenge
Buy a box of clay-rabbit targets, which have thick outer rims and can bounce and roll along the ground without breaking, from a shooting range that offers five-stand or sporting clays.

Step one: Team up with a hunting buddy and take turns shooting and rolling the targets along the ground. They are strong enough to resist breaking, and those not hit with a bullet can usually be retrieved and thrown until a slug does find its mark. The target is only half an inch thick, making it extremely difficult to hit when traveling straight away, but if the thrower (who stands slightly in back of the shooter) moves to the side and rolls the target across and in front of the shooter, more of its surface is exposed. As the thrower moves farther to the side for subsequent throws, the angle changes and even more of the target is exposed to the shooter. The shooter should not begin firing until the target is directly out front or moving away from him.

Step two: After throwing several targets at various angles from one side of the shooter, the thrower moves to the other side.

Rabbit targets can be thrown underhand, but an overhand throw adds more spin and bounce, better simulating a bunny leaping from its bed and making tracks toward safety. The .22 rimfire is prone to ricocheting, so be sure you’re shooting in a safe direction. Use a leaf rake and shovel to clean up the broken targets.

Advanced Challenge
Shoot two rabbits thrown quickly one after the other.

Back then I used a revolver with open sights, but I now prefer an autoloader, such as the Ruger Mark III Hunter, wearing a red-dot sight.