Photo by Andrew Hetherington Given a solid rest and enough time to find a clear shot, most hunters can topple... 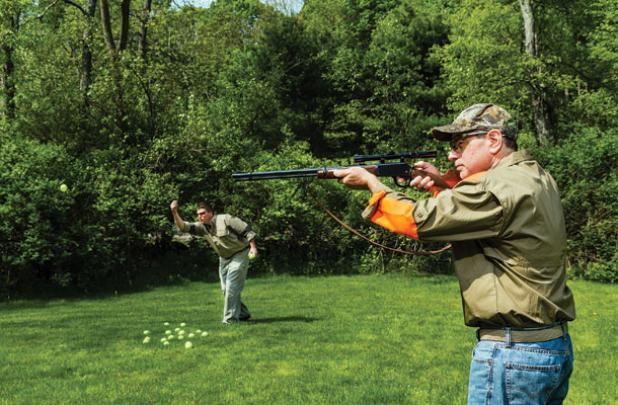 Given a solid rest and enough time to find a clear shot, most hunters can topple a squirrel from the treetops. The limb dancers that get away are the ones that aren’t in the treetops at all. They’re the squirrels that show up close and scurry along a fallen log at 30 feet.

These squirrels never stop long enough to offer you a stationary shot. They accelerate and decelerate like a pinball, and somehow still retain the ability to see you raise your rifle, which turns them into a speeding, vanishing gray blur. The trick is to shoot before that happens–meaning you have to hit a small, erratically moving target at relatively close range.

Channel the spirit of a bocce ball champ, and bounce and roll a spherical squirrel-size target along the ground. You’ll need a bucket of old tennis balls and a buddy to toss them, and make sure there’s an appropriate background to absorb the bullets. The thrower stands a yard or two behind and at varying distances perpendicular to the shooter.

Step one: Start with balls tossed from about 25 yards down the line. These will cross in front of the shooter in near profile, just like an unalarmed but actively foraging squirrel.

Step two: Make the shots more difficult as the thrower stands closer to the gun. With the balls coming from beside the shooter, the shot simulates those all-too-frequent times when you’re busted by a feeding squirrel and he’s hightailing it to the nearest tree. Your goal: Three out of five hits on a bouncing tennis-ball squirrel.

The nod goes to a semiautomatic with a tubular magazine for plenty of quick follow-up shots. Try a Remington Model 552 Speedmaster with a scope that dials down to at least 2X.