The full-size pickup truck segment is arguably the most competitive in the automotive industry, says Toyota. My first impression of... 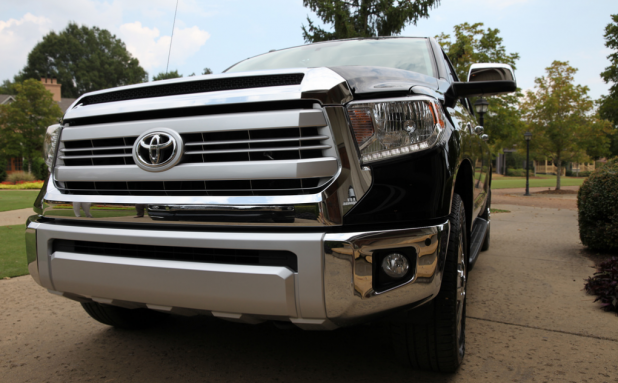 The full-size pickup truck segment is arguably the most competitive in the automotive industry, says Toyota.

My first impression of the 2014 Toyota Tundra is, “holy sh*t, look at how big the scoop is on the top of that grille.” I write this down in my notebook. Me and Mac Demere are sitting in plush leather chairs on the grounds of Barnsley Gardens, a beautiful southern golfer’s retreat built around the ruins of an old plantation house deep in the hills of North Georgia. The truck is on screen behind Bill Fay, Toyota’s General Manager, who is running through the vehicle’s new features before turning us loose to play with the real thing for an afternoon.

Mac Demere is a freelance auto writer who drove down from the South Carolina highlands earlier in the day. He earned a journalism degree from Ol’ Miss, started racing cars at age 27, then worked as a test driver for Michelin for 7 years. He’s been taking concealed-carry self defense courses, he tells me, learning how to shoot bad people “at bad breath distance.” I love driving but have no formal testing experience, so I pop in an altoid and latch on like a cockleburr to pick up on what he says.

The screen behind Fay switches to a video recording of Mike Sweers, the lead designer for the new Tundra. Sweers, says Toyota, is a farm boy from Ann Arbor who gets paid to create trucks. The truck’s new look is “more traditional, more chiseled,” Sweers says. “We really wanted to go after that bold design. We think this gives the message that we’re ready to take on the industry.”

Toyota trucks have a reputation for longevity and low cost of ownership that started with the Hi-Lux (1968), 4 Runner (1984), and Tacoma (1995). These were trucks that, if maintained properly and driven responsibly, regularly lasted 150 to 170 thousand miles, and in many cases lived well into their 200s, which helped them retain value. But they were small. Toyota needed vehicles to compete with the popular half-ton pickups offered by Ford, Chevy, and Dodge. And so the Tundra was introduced in 1999.

The 2014 keeps the same power plant (and towing capacity) in place, but has enough new features to make this the most dramatic update to the line since that 2007 release.

Suspension and Steering
Mac and I pair up to take the trucks on the road. We pick a base model single-cab SR ($25,920 – not shown), figuring it’s the vehicle most of our readers will actually end up driving. We start with a short scenic drive of about 15 miles through rural southern farm country. Mac takes the wheel for the first half. He turns left out of the Barnsley Gardens gates onto a winding two-lane road that’s well marked and well paved, but narrow, with high enough shoulders to make you aware of the edge.

Mac takes things easy. The best way to gauge the feel of a truck, he says, is to drive it like a rational human being. Trucks are made for hauling, towing, and practical driving. There’s no need to race in a base model. He tests the steering by getting as close to the edge of the road as he can and says he’s gauging how comfortable he feels, how well the truck tracks around corners and in straight lines.

I take the wheel about halfway through the drive. I can’t help myself, and push the speed into upper middle comfort range. The truck handles smoothly, accelerating quickly and cornering less like a pickup than I expect.

Wheels and Tires
“Most of what you’re feeling on a drive like this is how well the tires fit the truck,” Mac says. “Tire companies spend a million bucks working with car companies to develop tires [to fit their new vehicles].” Michelin, for example, probably sent Toyota at least four or five versions of the LTX A/T 2s that come standard on their SR and SR5 models.

“Toyota will say they like this about one version, that about another, and then the tire company works to design what they want,” Mac says. You mess with this equation at your peril. “If you don’t go OEM on your tires,” he says, “you’re acting like an amateur tire developer. I’m not saying don’t buy aftermarket, I’m just saying you have to know what you’re doing before you do it.”

Off-Road Performance/4-Wheel Drive
The next course is off road. We avoid extreme maneuvers in favor of a practical, money-saving driving style. Meaning slow. If you want your truck to last you have to treat it properly, says Mac. Driving fast off road is an expensive way to have fun.

We’re driving a TRD Off-Road 4×4 DoubleCab and play with 4-Lo, 4-High, and 2-Wheel drive, rolling sedately over a field of modest grassy bumps and around some off-camber berms; stopping and starting on the steep stuff. The ride is comfortable; the bumps not too hard on your mid section. A dial on the dash makes it easy to shift between drivetrain settings, and there is enough steady compression in 4-Lo to make the steeper descents ride smoothly with minimal braking required. We have little opportunity to test performance in slick conditions, since the weather (and course) are dry.

Tow Test: Weights And Capacities
Our last test drive is a tow. The course is short, less than a quarter mile, but it does give us the chance to navigate through some tight, gated corners, pull out and accelerate quickly into traffic, and test the brakes and stopping power in a real-world environment. We’re towing an (empty) 2,200-pound Ranger bass boat. Acceleration is good, and the Toyota’s 13.9-inch front disc brakes (the largest diameter in the half-ton class) kick in with smooth authority when I perform an emergency stop, slowing the truck quickly without letting the boat take control.

Two-wheel drive vehicles tow more than 4-wheel-drives, Mac tells me, as do trucks with smaller cabs. Both subtract weight from your truck and add it to your towing capacity. The truck we’ve picked is a 4×4 CrewMax (the 1794 edition, MSRP $47,320), which is the heaviest (and most expensive) truck in the lineup and therefore the one with the lowest maximum towing capacity (9,000 pounds). The new Tundra with the highest towing capacity (a regular-cab 4×2 equiped with a 5.7-liter V8) will tow 10,400 pounds.

Toyota’s Rachel Duerloo sits in the back as we tow the course. Rachel came up through Toyota’s tech and maintenance operations and is now the Senior Product Education and Development Administrator for the company. According to Rachel, the 2014 Tundra is the first full-size pickup to comply with the Society of Automotive Engineer’s J2807 standards. These were created in 2008 to make it easier for consumers to compare the towing capacities of trucks from different manufacturers. Ford, for example, might test capacity differently than Chevy, making it difficult for consumers to compare their trucks.

Rachel tells us that Toyota, Ram, GM, and Ford (and later Nissan) have all agreed to adopt these standards, which actually take the form of a rigorous series of tests. One test measures how well a truck towing weight can stop and start on a 12 percent grade. Another ensures that for any given trailer weight, the truck can accelerate from a dead stop to 30 MPH in 12 seconds or less, to 60 MPH in 30 seconds or less, and from 40 to 60 MPH over level ground in no more than 18 seconds. You can read more about J2807 standards at this article from Car and Driver magazine.

Interior Changes: Utility and Luxury
The interior of the base model is simple and comfortable, though for a tall guy like me the seats — which aren’t power and can’t be lowered straight down — felt a little high. Higher end models, (Limited and Platinum) feel both utilitarian and luxurious. The top end Model 1794 feels like the kind of truck Teddy Roosevelt might have driven, pulling off well-appointed western comfort (featuring more chrome, a premium brown leather interior and wood and leather accents) that tastes classic without much hint of hokey.

New for 2014 is center stack that’s 2.6 inches closer to the driver than before so it’s easier to reach. Backup cameras now come standard (though they’re mounted in the actual tail gate, making them useless when you’re carrying longer payloads). Redesigned seats in their CrewMax trucks now fold up and back (instead of down), adding 2.6 cubic feet of interior storage space to the model. Toyota also says they’ve doubled the amount of ventilation on their seats.

On the practical side, my favorite feature was the pickup’s 3-piece rear bumper, which can be repaired in sections, saving you the cost of a full bumper replacement when you hook yours on a stump. Another nice feature; on premium models a cross-traffic approach moniter beeps as you’re backing into traffic, letting you hear what you can’t see coming when you’re in a tight spot.

The Takeaway:
The 2014 Tundra is a powerful towing machine with classic lines that should hold its value well. If you like Toyotas and need a big truck, buy a high-end model and treat it nicely. It’ll make a solid down payment on your next vehicle when you’re ready to let it go.

Engines, Grades, Sizes, and Pricing
New Tundras come in four grades that mix and match engine, cab, and bed configurations. The engines are either 4.0-liter V6s, 4.8-liter V8s, or 5.7-liter V8s; the cabs regular, double, or crew-sized. Toyota’s grades are SR, SR5, Limited, Platinum, and Model 1794. Bed length in a regular cab is 8.1 feet. Double cabs come in either 5.5-foot “short beds,” 6.5-foot “standard beds,” or 8.1-foot “long beds.” Trucks with CrewMax cabs come in short bed only. All models are available in both 4×4 and 4×2.