Twelve-year-old Trey Keyser made the most of Virginia’s one-day youth season for whitetail deer, tagging two bucks on Sept. 28... 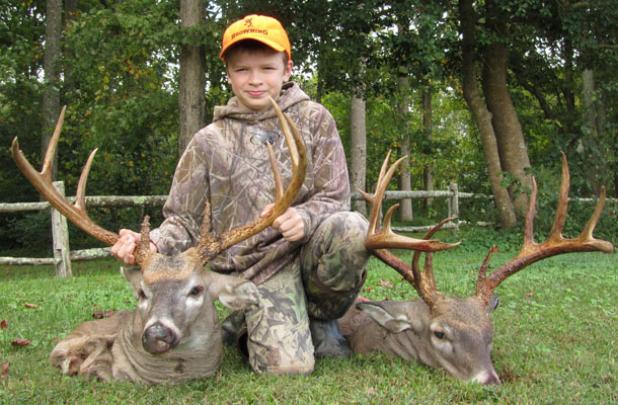 Twelve-year-old Trey Keyser made the most of Virginia’s one-day youth season for whitetail deer, tagging two bucks on Sept. 28 with a combined 275 inches of antler.

Hunting with his father, Stan Keyser, Trey used a .273 .243 to drop a 9-pointer in its tracks at 6:35, barely 10 minutes into the season. Twelve hours later and three miles away, the Prince George County boy shot a 12-pointer. A rough score puts the bucks at 124 and 151. “These are the first ones I’ve scored,” Stan says, “because I never killed anything that big.”

Both deer showed up on the trail cameras that Stan and a buddy set up in early July in Greensville County, and they were numbers 1 and 1A on the Keysers’ hit list. But Stan never dreamed his son would tag both bucks in a single day.

“I asked where he wanted to go that evening, and he said, ‘I wanna sit on the bean field where we saw that big 12-pointer; I think he’s gonna come out tonight.’ I said ‘Ain’t no way. You’re kidding me.’ But that’s where we went.”

Trey passed on a 6-pointer and three minutes later the 12-pointer showed, about a half-hour before the end of shooting light. Recovering that buck at the end of a short blood trail was “the most exciting” part of a very exciting day, according to Trey.

“You wouldn’t believe how many people have asked me, ‘How in the world did y’all do this?'” Stan says. The answer: Persistent scouting on Stan’s part and good shooting from Trey, who has now taken eight deer in his four seasons in the field. “He shoots that rifle real well,” says Stan. Well enough to start his 2013 whitetail season with a bang.