Matt Mosley had just begun to draw back on a 150-class 10-pointer that stood 15 yards in front of his... 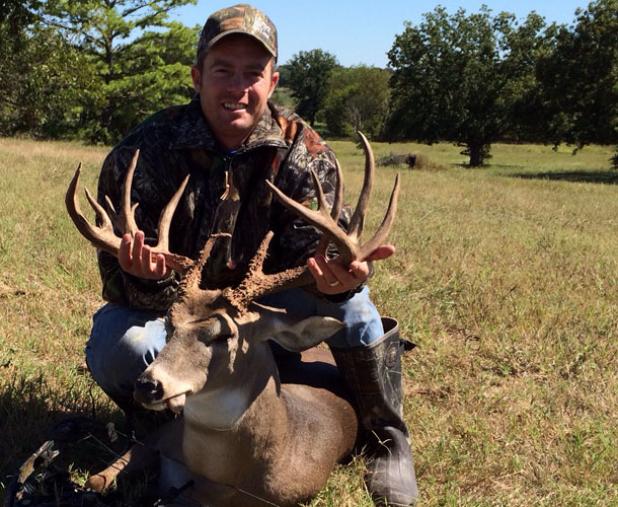 Matt Mosley had just begun to draw back on a 150-class 10-pointer that stood 15 yards in front of his southeastern Oklahoma treestand on Oct. 6 when a faint twig snap stopped him cold.

“I was about to shoot the biggest deer I’d ever seen and I turned and looked over my shoulder and all I could see was dark chocolate horns,” recalls Mosley, a 31-year-old loan officer from Plano, Texas, who has been bowhunting for 15 years, the last seven on a friend’s 3,000-acre low-fence ranch near Caddo. Fifteen yards behind him stood a 14-pointer even bigger than the buck he had in his sights. “I thought, oh my God, that’s the biggest deer I’ve ever seen.”

Mosley watched the bigger buck approach his stand, stopping to check the wind after every step. “After five minutes, I could tell he smelled something he didn’t like, and he turned a 180 and started walking away,” Mosley says. But after a few steps the buck spun back and again headed his way. “I know he smelled me, but something made him turn around and go against his instincts–and that was his mistake.”

Fifteen minutes after first spotting the 14-pointer, Mosley closed the deal with a 20-yard shot. But he would have to wait to claim his prize, which a preliminary green score puts at 162 5/8. The 150-class buck returned, and for 45 minutes Mosley snapped cell phone photos of the 10-pointer as it grazed in front of his stand.

“I actually had two buck tags in my pocket, so I could have shot the 150,” Mosley says. Instead he decided to let the buck walk in the hopes that one of his friends would get a chance at the thrill he was feeling.

“I was pumped. I was shaking. It was tough not to shoot the 10-pointer, but I knew I’d just laid a better one on the ground.”