A First Buck Worth the Wait

In seven years of hunting the family farm in Piketon, Ohio, 29-year-old elementary school teacher Jennifer Buckler had never even... 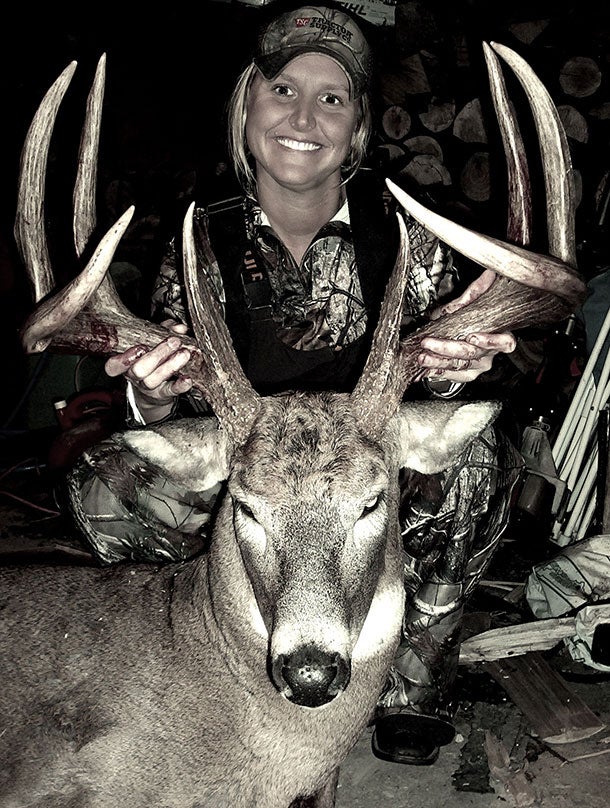 In seven years of hunting the family farm in Piketon, Ohio, 29-year-old elementary school teacher Jennifer Buckler had never even drawn on a deer until a big 8-pointer walked in front of her stand on October 28. And then she whiffed–or so she thought.

Buckler’s brother, Jordan, had been hunting the deer for a couple of years, and this fall he was getting lots of trail camera pictures of the buck in the afternoons. But because Jordan works second shift and can only hunt mornings, Jennifer had the best chance of seeing the bruiser on its feet in daylight. Getting to her stand around 4:15 that Monday, after her day at Jasper Elementary School ended, she saw three does feeding 100 yards away. Then the big 8-pointer came in and started rubbing a tree 40 yards in front of her. She waited until the buck got within 30 yards to take her shot.

“I could see where the arrow stuck in the ground, and I thought I’d shot low,” Buckler says. “I got out my phone and texted my dad that I’d just missed a beautiful 8-pointer. I was ready to cry; it was a horrible feeling,”

Buckler sat tight until dark, hoping other deer would show. When her dad, Denny Buckler, came to pick her up, they searched for the arrow together. “He found it,” Jenny recalls. “He picked it up and said, ‘Jennifer, this arrow has blood all over it.’ So then I got a little bit excited.”

With the help of friends they found the buck after a two-hour track. “It was a dead sprint when I saw him laying in the field,” Buckler says. “When I got to him I sat down and cried.”

Buckler says her students in kindergarten through third grade “think it’s pretty cool their teacher hunts deer.” She credits her brother for setting trail cameras and hanging stands that helped her get on the buck, and says her father’s pride in her trophy made the day special. “Deer hunting is a family thing we do together,” Buckler says. “So whenever you can achieve something like this, it’s good for everybody.”