Photo courtesy of Georgia Outdoor News Dwayne Britt held off hunting one of his favorite Georgia whitetail spots so his... 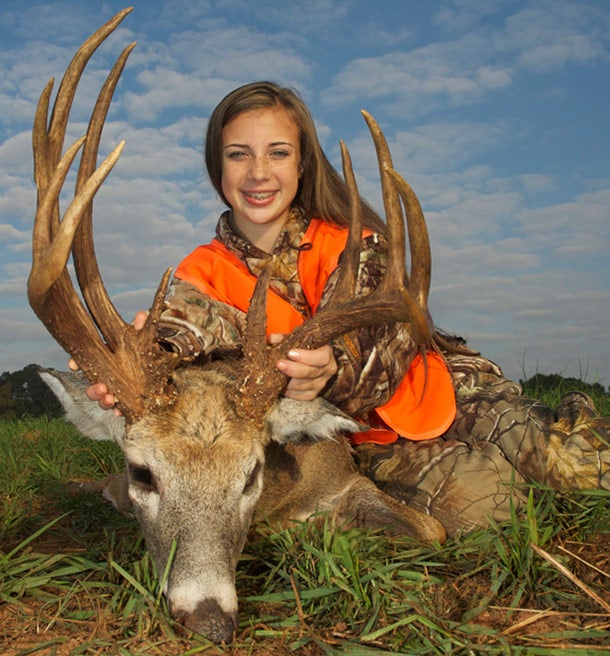 Dwayne Britt held off hunting one of his favorite Georgia whitetail spots so his kids could get a crack at a big deer. The strategy paid off when his 12-year-old daughter, Grace Britt, shot a 21-point, triple-beam buck on October 27 that’s estimated to score in the 170s.

A 7th-grader at McConnell Middle School in Grayson, Grace was asleep in her father’s box stand when a big nontypical buck they captured on a trail camera walked into a clearing early that Sunday morning. “I put the crosshairs on him and saw it was Daggers,” recalls Dwayne. “I bumped her and said, ‘Wake up. It’s a big buck and I want you to shoot him.'”

What followed was a 20-minute emotional rollercoaster that left father and daughter drained but elated. Just as Grace centered the buck with the gun–a Marlin 30-30 handed down from her great-grandfather–it faded back into thick cover. From his vantage point on the other side of the stand, Dwayne caught glimpses of the deer in the trees; he took the rifle but couldn’t get a clear shot. “I said, ‘I’m gonna try to grunt him back in here.’ I gave her the gun and grunted a few times.”

Soon they spotted another buck 20 yards away, a 150-class typical, staring straight through them at a doe standing behind their stand. Grace prepared to take the buck when it turned broadside, but it too disappeared into thick cover before she could shoot. She passed the gun to Dwayne, who, thanks to his different position in the blind, had a shot. But he decided to hold his fire when the buck turned and moved again in Grace’s direction.

“I thought she was going to get another chance, so I put the hammer back and set the gun up so she’d be ready when he came into her shooting lane. But he just disappeared. By this point the adrenaline was going crazy, and it was like our blood pressure just dropped. We had two huge bucks in front of us, and both disappeared like ghosts.”

As Grace was describing her excitement and disappointment, her father again spotted a buck–except this time it was Daggers. “We’d almost forgot him, because 15 or 20 minutes had passed since we first spotted him. Grace got the gun ready and I said, ‘Are you on him?’ She said, ‘I’m on him.’ I said, ‘Shoot him, shoot him, shoot him.'”

Her 40-yard shot was true, and the celebration that followed, Dwayne says, is one he’ll long remember.

“All my friends say, ‘Why didn’t you shoot that deer? You may never get the chance at a deer that big again in your life,” he says. “But how many times am I going to have my 12-year-old daughter in my stand and something like that happens? It’s insane how awesome it was for my kid to do that, 10 times better than any deer I’ve ever killed. It’s one of those moments I’ll never forget.”