How I Hunt: Tony Vandemore on Dogs, Duck Habitat, and Teal Sandwiches

Photo by Michael Sugrue A lot of my best childhood memories are from the blind. My dad, uncles, and grandfather... 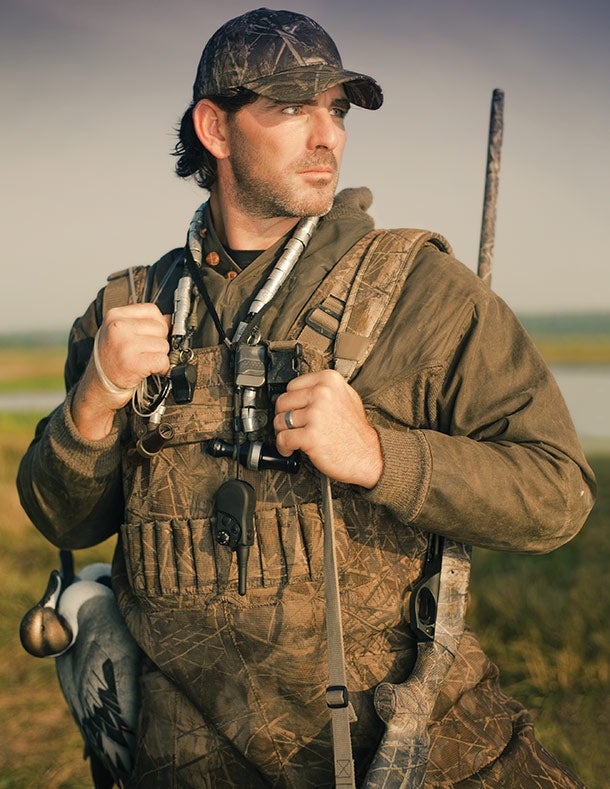 A lot of my best childhood memories are from the blind. My dad, uncles, and grandfather were taking me with them when I was still in diapers. I remember one of those early hunts, when I was a little older, I was freezing cold. But I wasn’t going to say anything because I didn’t want them to not take me the next time.

Gramps wouldn’t let me blow a duck call in the blind until I knew what I was doing. So I used to go around practicing nonstop—in the car, in the shower, lying in bed at night, you name it. I’ll never forget that first time. There was this flock of birds coming, but they were kind of sketchy, and Gramps told me, “Come on. Get on ’em.” After that, I had this feeling: Man, I’m a duck hunter now. I’m one of the guys.

I played baseball in college and was drafted by the San Diego Padres. I spent a couple of years in the minors, but I learned I’m a lot better at duck hunting than hitting fastballs.

After college, I started my own snow goose operation in northern Missouri and guided for a couple of years. I became really great friends with two of the guys I hunted with back then, and the three of us decided to work together. We all wanted to give other hunters the opportunity to experience the kind of hunting that we appreciated so much. We wanted to share the beauty of 300 mallards falling into a timber hole. So, we bought a couple of farms and from there we built Habitat Flats.

Today we have roughly 2,700 acres, and there’s a little bit of everything. We’ve got standing flooded crops, moist soil marshes, oxbow sloughs, flooded timber, dry-field hunting—pretty much everything. One of our guests always calls Habitat Flats “the Disneyland of duck hunting.”

Whitetail hunting just doesn’t have it for me. I mean, there’s no dog.

I love the calling in duck hunting—being able to make a wild bird come to a place that you want by calling and decoying. The art of deception is pretty cool.

All hunters go through different stages. When you’re young, you want to pull the trigger and shoot your limit. At this point, it’s certainly not about that for me. It’s about creating habitat and watching these birds benefit from it.

The off-season stuff is so time consuming and such hard work. There’s just never an end to the projects—building blinds, planting crops, pumping water… The actual duck season is like a vacation for me.

Hunters are the best conservationists, but the industry is very torn. If you blow this type of call, you can’t talk to these guys because they blow that type of call. If we can’t stick together as hunters—especially over a message like conservation—there isn’t going to be anything left to hunt.

Forty degrees with a 10- to 15-mph wind out of any direction and sunshine—those are the perfect conditions for a November duck hunt.

I like a decoy spread to not look like a decoy spread. I’m not a big advocate of J’s or hook spreads or whatever people call them, and you don’t need to lay them out there so the spread looks like a diagram in a textbook. Throw a few here and leave a little space and throw a few there. Just take a handful and sling them out here and there, and however they end up is how they end up. To me, that looks natural.

I’m a black Lab man. I like their looks and they’re smart. Ruff is my old dog. He just turned 11 and has probably picked up 25,000 birds in his career. Junior is about 4. And my pup is 5½ months now. His name’s Ki. That was my grand­father’s nickname.

I make a good Philly teal-steak sandwich. Cut the breasts into thin strips and marinate them in olive oil overnight. Then in a big sauté pan, cook some onions, green peppers, and mushrooms. In another skillet, flash-fry the teal in olive oil, then put them on a toasted hoagie along with the vegetables and pepper jack cheese. Mmm.

When I see kids come to the lodge, it’s such a rush of emotions for me. I look at them and know what they’re going through because I’ve been there. Just to be able to be around kids and watch them shoot ducks is something that’s pretty special.

There’s nothing prettier than a greenhead in sunshine.

I always loved the family aspect of duck hunting, but I loved the mystery of it, too. The boat ride through the timber in the morning, listening to all of the sounds and watching the world wake up, that was the coolest thing a kid could do. It was always a neat experience for me. It still is.