Photos by Jarren Vink The newest modern muzzleloaders are better than ever. But which one is right for you? We... 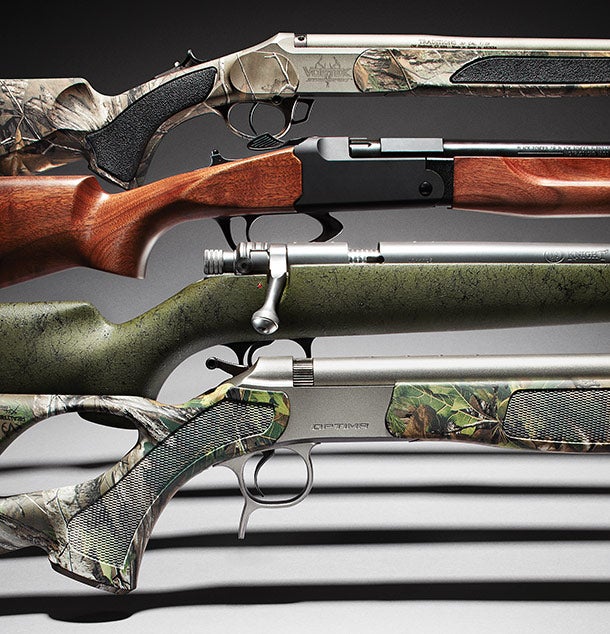 The newest modern muzzleloaders are better than ever. But which one is right for you? We test four brand-new models to help you choose wisely.

For 2013, in-line muzzleloader makers have introduced the first modern hammerless break-action designs and totally reinvented the breech plug, for starters. Below is the year’s new crop of front-stuffers, and after days of testing each for quality, design, accuracy, and overall performance, I recommend that you get in line to check one out.

First I measured and weighed the guns to confirm factory specifications. Then I handled and inspected each to gauge balance, feel, and quality of construction. I dry-fired each extensively to test the quality of the trigger pull and used a Lyman Digital Trigger Pull Gauge (cabelas.com) to test the weight, taking an average of 10 pulls. After scoping each, I shot the heck out of them, using several different loads to test out-of-the-box accuracy, recoil, and handling ­characteristics.

Specs: .50-caliber break action • 26″ barrel • 6.65 lb. • No sights but comes with one-piece Dead-On scope mount
The Lowdown: With a 416 stainless-steel fluted barrel and a Quick Release Breech Plug, the Optima has been one of the best deals in muzzleloading. This updated version’s trigger-guard breeching lever and internal parts are now identical to that of the company’s top-of-the-line Accura V2 model. My test gun’s trigger had no creep and broke cleanly at 2 pounds 15 ounces. Most impressive, 100-yard groups averaged about 1.5 inches and in one case put three slugs in one ragged hole.
Hits: Simple, handy, smartly designed, solidly made, easy to clean, and very accurate. What else do you want?
Misses: The trigger has a tiny bit of overtravel. That’s about it.
Who Should Buy: Anybody who’s looking for a basic but very good in-line that is an unbeatable value.

Specs: .50-caliber bolt action • 24″ barrel • 6 lb. • Drilled and tapped for scope, and base model available with Williams fiber-optic sights
The Lowdown: As handy as it is handsome, the Ultra-Lite has a lightweight textured Kevlar stock and a contoured Green Mountain barrel. Its open-breech action fires 209 primers as well as No. 11 or musket caps, making it legal in every state. The fully adjustable trigger on my test gun broke crisply out of the box at 3 pounds 7 ounces, with zero creep. Hundred-yard groups averaged about 1.5 inches.
Hits: Very light; very accurate. The stock is wonderfully comfortable and ergonomic. Best trigger here.
Misses: Comparatively difficult to prime and clean.
Who Should Buy: Anyone who wants a handy in-line that looks and shoots like a high-end centerfire bolt.

Specs: .50-caliber break action • 24″ barrel • 7 pounds • Williams fiber-optic sights and scope base included
The Lowdown: The ingenious Adapt breech system features a toolless retaining collar over external rather than internal breech-plug threads, making for supereasy cleaning and no possibility of a seized plug. And there is no external hammer. To cock the gun, you slide the quiet Stealth Striker forward. With a Cloverleaf Precision Barrel and an FT2 match trigger, which had a touch of creep and broke at 3 pounds 1 ounce, my test gun averaged 2.1-inch groups.
Hits: The Adapt breech is truly a better mousetrap.The walnut model is the best-looking break-open in-line made.
Misses: Personally, I found the stock dimensions a little uncomfortable.
Who Should Buy: The guy who wants today’s most innovative in-line. Just make sure the stock fits you first.

Specs: .50-caliber break action • 28″ barrel • 6.25 lb. • Drilled and tapped for scope and comes with Williams fiber-optic sights
The Lowdown: For 2013, Traditions also introduces a hammerless break-action design, which functions much like the LHR’s, improving lock time and allowing for lower scope mounting. The gun has a fluted, chrome-moly barrel and an alloy frame, both with a Premium CeraKote finish; a toolless Accelerator breech plug; and a butt pad that slides off to provide storage. The two-stage trigger has some creep and mush but breaks consistently at 2 pounds 13 ounces. Groups averaged 2.5 inches.
Hits: Sleek and light. Breech plug removal is a snap. Great price.
Misses: Worst trigger, but not awful.
Who Should Buy: The hunter looking for a solid, no-hassle, innovative in‑line at a low cost.