Photos by John “Doogie” Howell and Lance Schwartz Up until a few weeks ago, if you were able to travel... 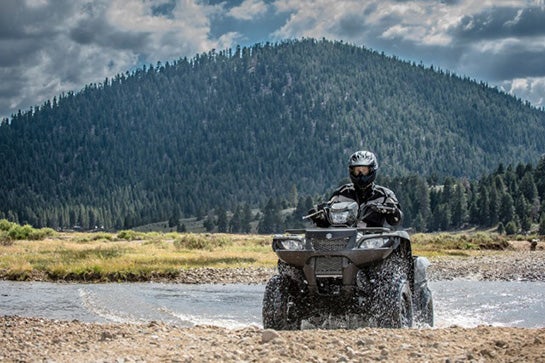 Up until a few weeks ago, if you were able to travel back in time to 2009 and walked into a Suzuki dealership, that six year old Suzuki King Quad 750AXi Power Steering could easily be mistaken for a new model. For lack of a more politically correct explanation, Suzuki has been on cruise control for the last five or six years with no game changing new models to offer. Although the 2014 King Quad 750 AXi looks like the same old King Quad Suzuki has been offering for half a decade, there’s a little magic hidden underneath the plastic bodywork that shows Suzuki might finally be ready to dig in and fight.

Although still a fuel-injected 722cc liquid-cooled, single cylinder four stroke engine like previous models, the ’14 engine gained an extra spark plug this year located on the right side of the cylinder. An all-new catalytic converter also helps the engine expel cleaner exhaust to help keep our furry friends breathing fresh air. Power and torque are identical to previous engines, but the engine and intake changes help net the King Quad 750 AXi a ten percent increase in fuel economy over previous models. Power delivery and the “seat of the pants” experience felt the same as the old models, but now it essentially allows riders to travel further between fill ups and earns it a reputation for being greener. The King Quad 750 engine still lacks the arm wrenching power of some competitors, but it’s plenty powerful for any job and much easier to ride, especially when navigating rough, gnarly terrain.

Controlling the ignition is an all new Engine Control Unit (ECU) that incorporates Slip Control logic. Essentially, this electronic voodoo magic limits significant wheel spin by adjusting ignition timing to cut power when sudden bursts of excessive wheel spin produce RPM spikes. I found it hard to detect the Slip Control actually functioning, but that in itself is likely part of the magic. When riding on slippery terrain, a certain amount of tire slippage is all part of the fun. In my testing, the Slip Control never seemed intrusive.

Suzuki’s QuadMatic Continuously Variable Transmission (CVT) is one of my favorite CVT’s in the industry. The Low, High, Neutral, and Reverse gears are actuated through a buttery-smooth left hand shift mechanism. The engine braking on the 750AXi felt very natural, and nearly imperceptible, just like it was the engine’s own natural compression doing the braking itself. An electronically actuated front differential lock worked great and it’s one of the few systems that can be engaged when at a complete stop. This comes in handy when the machine is already stuck and unable to move forward or back to engage the differential lock.

The 750AXi features four wheel independent suspension that delivers a crisp, comfortable, sporty ride. The Suzuki isn’t quite as plush as some of the other big bore competitors on the market, but it also doesn’t have the tendency to wallow like those machines when ridden aggressively. If you’re going to buy a King Quad, save your pennies to buy the Power Steering model. Before Electric Power Steering became available back in 2009, King Quads earned a reputation for being easy, but completely unpredictable to steer over rough terrain. The EPS reduces steering effort, minimizes rider fatigue, and fixes all the steering gremlins that previously hurt its reputation. Unlike other EPS systems, Suzuki’s is very conservative. The EPS assist remains nearly invisible until the front wheels impact a trail obstacle. After some of the logs and giant rocks I hammered, there is no question that the same ride on a non-EPS model would have ended quite differently.

The front brakes are twin hydraulic discs actuated from a separate front brake lever, while the rear brakes are the same sealed, wet, multi-disc design used on all King Quad models built on this chassis since 2005. The sealed rear brake works well, but the cable actuation leaves the rear brake pedal and lever feeling numb. That disconnected feeling is inherent to this type of braking system, since the brake is cable operated rather than hydraulically linked like the fronts. The good news is the rear brakes will remain virtually maintenance free for their lifetime.

Ergonomically, a giant T-shaped seat helped keep me firmly planted in the saddle, but also allowed me to move around on the seat during my more aggressive riding escapades. The King Quad is one of the smaller and lighter ATV’s available in the big-bore category, but it was sized perfectly for my 6-foot-2-inch frame. The front and rear cargo racks are made of sturdy round bar, which also gave me the ability to strap down my cargo with ease. Finally, a gauge pod mounted light allows the trail to be illuminated in whatever direction the bars are turned.

Final thoughts:
There are so many great big-bore ATV’s on the market right now that it makes choosing one a massive challenge. Every manufacturer offers models with Electric Power Steering (EPS), Electronic Fuel Injection (EFI), and Independent Rear Suspension (IRS). The 2014 Suzuki King Quad 750AXi has all of these features. Additionally, it’s built in the USA on one of the smaller sized chassis, has an awesome transmission, and an electronic differential lock that will eventually help rescue the owner from trouble. Pair all of these impressive characteristics with Suzuki’s long-time reputation for engineering reliability into their machines and the 750AXi becomes even more attractive. The King Quad 750AXi Power Steering may not be the flashiest or most powerful offering in the big-bore ATV category, but it will undoubtedly provide owners years of trouble-free service.

Misses:
– The rear multi-disc brake cable’s lack of hydraulic actuation leaves it feeling numb.
– Although a solid machine, the King Quad is due for a significant redesign.