Photos by Travis Rathbone Unlike everybody else these days, I don’t long for a sub-half-minute, tactical bolt. Well, maybe a... 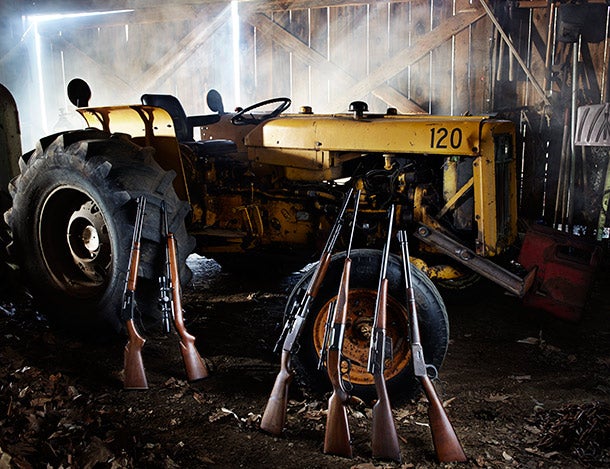 Unlike everybody else these days, I don’t long for a sub-half-minute, tactical bolt. Well, maybe a little. But what I really want are the guns in the yellowed photos at deer camp, where in the monochromes the old boys in knee pants cradle classic levers, and in the Polaroids the regular guys off for a week from the Alcoa plant carry hardworking pumps and autos.

Turns out, these blue-collar classics are still widely available, still priced right, and still solid deer guns. With today’s sub-$500 bolts turning in clover­leaf groups, bargain hunters no longer need to raid the used rack. And as yesteryear’s hunters walk their last trails, more widows and kids want to be rid of the old guns. The result is a wealth of modestly priced, classic deer rifles, adorning the walls of local shops and the pages of online gun-auction sites.

These aren’t collector’s items. They’re working guns. Tools. Many aren’t accurate by today’s standards but are accurate enough if you don’t mind an added challenge. Above all, they carry a connection to those who came before us. They burn with questions: whose hands, what hills, how many miles, how many bucks?–a mystique that makes them far cooler than any plastic bolt.

Here’s what I’ve got in my old toolbox. 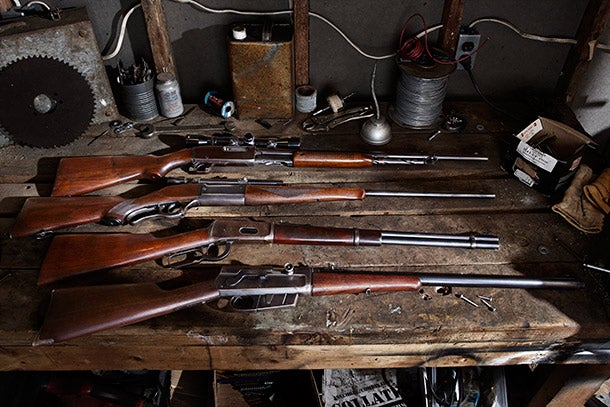 Remington Model 8 and 81
Originally offered as the Remington Automatic Rifle in 1906 and renamed the Model 8 in 1911 , this long-recoil John Browning design was the first semiautomatic centerfire rifle chambered to deal with truly big game, a fact Remington played to the fullest in fantastically romanticized advertising art featuring intrepid, Model 8-toting heroes facing off with grizzlies, mountain lions, and wolves. Legendary Texas Ranger Frank Hamer, who formed the 1934 posse to subdue Bonnie and Clyde, carried a modified Remington Model 8 to the deadly ambush, and according to the lore, the fatal shot to Clyde Barrow’s temple came from Deputy Prentiss Oakley’s Remington Model 8.

As a brush rifle, what makes the Model 8 stand out is that: (1) It came in .35 Rem., a fine and still available big-woods round; (2) Its trim form makes for a fairly light and quick-handling package; and (3) With its sheathed barrel, fixed box magazine, and receiver-mounted safety lever, it is one crazy-cool-looking gun, guaranteed to stand alone at deer camp.

In 1936, Remington beefed up the stock, added the .300 Savage chambering, and renamed it the Model 81 Woodsmaster, a name retained for its eventual replacement, the 740 Woodsmaster. The latter is an affordable classic in its own right and admittedly a better gun. But the Model 8 started it all. When I got mine in .35 Rem. for under $400, the shop owner said an elderly lady had brought it in, saying her late husband’s favorite thing to do in life was hunt deer in the Adirondack Mountains with that gun–and that she wanted another hunter to have it. When I carry it, I feel like he’s along.

Winchester Model 94, Pre-’64
In August of 1894, when Winchester’s hot offerings were the powerful-but-burly 1886 and the graceful-but-underpowered 1892, John Browning showed the company his patent for something in between–something just right. Seven weeks later, Winchester unveiled a then potent repeater so elegant and nimble, so just right, that it became the American deer rifle for nearly a century. From its debut until 2006, nearly 7 million 94s left the factory, outselling all other deer rifles before or since.

That’s why the yellowed photos are strewn with 94s, and why this peerless rifle is still so common and affordable. Look for a pre-’64 model. Get it in .30/30 or .32, and love it for what it is: an open-sighted, fast-handling brush rifle for men with the skill to hunt close with their feet on the ground.

Savage 99
Devotees call this the greatest all-around deer rifle ever made. Although the elegant 99 generally cannot match the accuracy of today’s factory bolts, it is a perfect marriage of form and function. Handsome and fairly light, the 99, fully loaded, was made to balance with the round-bottomed receiver form-fitted to your palm. It has a decent trigger, takes well to a scope, and fires high-intensity rounds with enough accuracy for moderately long-range shooting. In other words, it handles like a lever and performs like a bolt.

When the Savage 99 debuted in the last year of the 19th century, it was so far ahead of its time–with its hammerless receiver and rotary magazine allowing for high-power cartridges loaded with spitzer bullets (which the 94 and Marlin 336, with their tubular magazines, can’t safely fire)–that no lever like it appeared until 1955, when Winchester rolled out the Model 88, which was not as good a gun.

Savage discontinued the 99 exactly 100 years after its debut. With over a million built, there are plenty of used ones. Fine, old specimens in rare calibers can fetch $3,000 or more. But good working guns in .308 and .300 Savage can be had for under $700. Favor guns with the rotary magazine. When you find one, snap it up.

Remington Model 14 and 141
Introduced in 1913 to compete with the great lever-action rifles of the time, the Model 14 was the first high-power slide-action center­fire rifle and the only one that’s ever caught on with deer hunters. It took decades, but the Model 14’s successors, the 760 and 7600, are now fixtures in Northwoods deer camps.

Like the modern Remington pump, its predecessor is quick, dead reliable, and more accurate than it has any right to be. But with its slender lines and unique spiral magazine tube, the 14 will distinguish you from the 7600-toting hordes, as will the near identical 141 Gamemaster.

You want this one, too, in .35 Rem. The fairly rare and coveted carbine version can be pricey, but you should be able to find a bargain otherwise. I got my 141, in excellent condition, for under $400 on gunbroker.com.

It’s not a perfect gun. Besides this one thing in college that I don’t want to talk about, my 141’s trigger is the worst thing I’ve ever squeezed. But the gun shoots damn near 1-inch groups at 100. 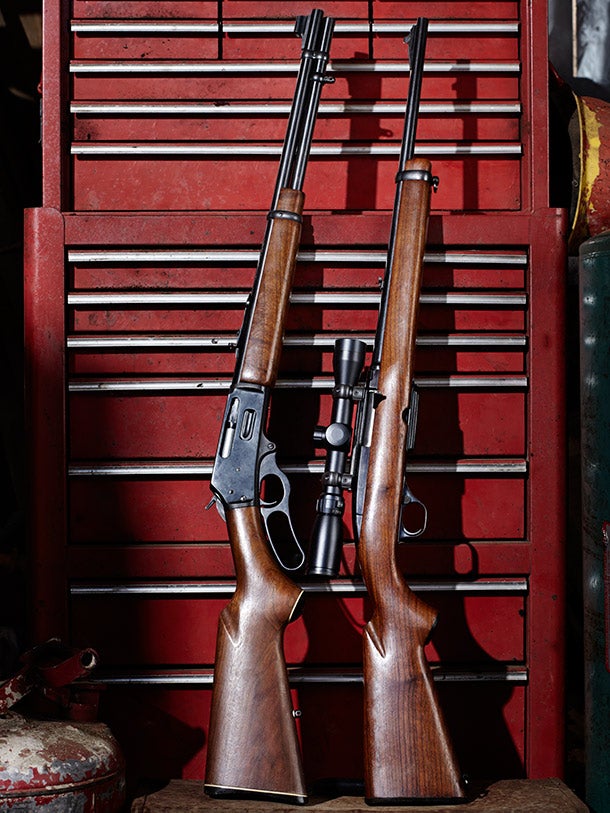 Marlin 336
Winchester ruled the repeating-rifle world of the late 19th century, and so when an upstart Marlin Arms Co. introduced a potent, nimble, side-ejecting lever a full year before the 94, its Model 1893 didn’t immediately gain the popularity it deserved. But it has today, in the form of the 336. With a few changes, including a heavier, pistol-grip stock, the 1893 became the 1936 (you can guess when), which became the 36, which became the 336. Though no longer as slender or sprightly as the 94, the 336 is better suited to the modern hunter: Its solid-top receiver takes naturally to a scope, the trigger can be tuned for a better pull, and it tends to be the more accurate rifle.

Winchester Model 100
As a rule, this rifle suffers from mediocre accuracy. So what? With its one-piece stock, the Model 100 is the purdiest factory auto ever made, and the 61⁄2-pound carbine version with a 19-inch barrel may be the quickest handling, too. For the still-hunter and tracker who jumps deer from their beds and almost never sees a shot beyond 100 yards, the 100 is accurate enough and hard to beat in any other regard.

Winchester introduced the 100 in 1960 as the autoloading twin to the Model 88 lever, which also wears the handsome one-piece stock. (The latter is an affordable classic, too, but misses the list because there are at least three better classic levers, all here.) The 100 was at first offered only in .243 and .308, with cut checkering on the grip and fore-end. After 1964, the checkering was replaced with a cheaper, impressed basket-weave design, which some of today’s buyers actually prefer. A .284 Winchester chambering was added in 1966 and the carbine model in ’67.

Warning: Winchester recalled the 100 in 1990, due to a potentially dangerous firing-pin malfunction. Call the company with the serial number to be sure yours has the new pin, or switch it out. They still honor the recall.