Photo by Donald M. Jones You’ve heard the cliche: Whitetails know their turf like you know your living room. But... 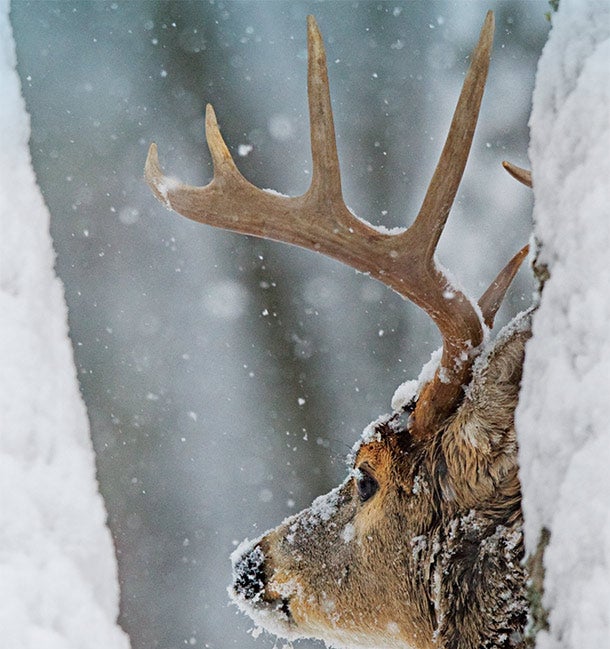 You’ve heard the cliche: Whitetails know their turf like you know your living room. But when someone rearranges the furniture, you might go to sit on the coffee table. It’s the same with deer, says Beam, who primarily hunts in Nebraska and Kansas. “When a farmer cuts a cornfield, it changes the whole immediate environment, and it takes a little while for deer to get their bearings. You need to seize the moment.”

A lot of farmers leave crops standing well into the late season, so knock on the door or give them a call to find out exactly when they’ll be harvesting and be ready to go as soon as the combine changes the scenery. “Grab a ground blind, build a brushpile, or dig a hole out in the field near where you’ve seen deer entering the standing crop.”

A new covering of snow has the same effect. “It’s the perfect time to put on some snow camo and set up right where they feed,” Beam says. “The bottom line is the best time to set up in a hot late-season feeding area is when the whole field changes its look. Deer will walk right up to you.”

Stomp a trail
Crunchy, ice-covered snow is a frequent occurrence during midwestern winters. Wensel deals with this by going out ahead of time and stomping a trail to the spot where he plans to sit. “I just place my boots right next to each other and kind of shuffle in there, with no pretense of being quiet. And then I do the same thing on the walk out. When I return to hunt the next day, I’ve got an almost silent walking trail to my spot.”