Photos by Jarren Vink If you want to cleanly and efficiently remove the hide of a big-game animal, you need... 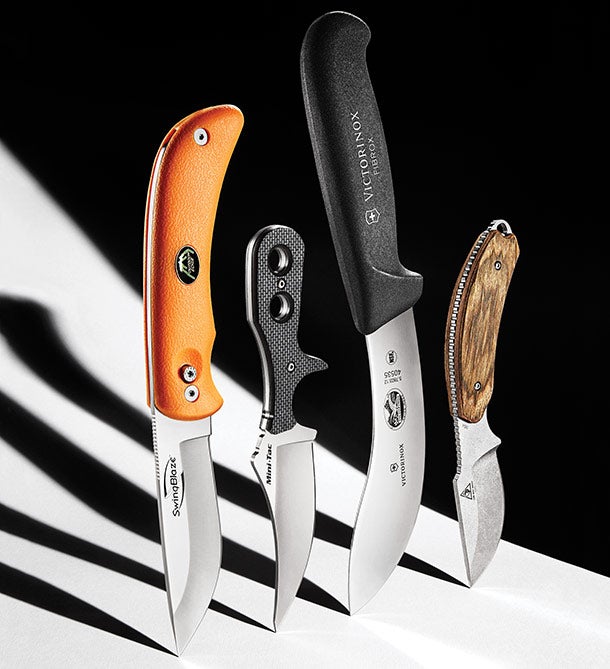 If you want to cleanly and efficiently remove the hide of a big-game animal, you need a skinning knife: a cutting tool that allows for a secure grip and has a relatively short, thin, and curved blade, to keep the tip from puncturing the hide or spearing the meat. Such blades need to be very sharp but also must hold an edge for a long time. We asked four professional game processors to test the four models below to evaluate their sharpness, grip, maneuverability, and durability.

The Lowdown:
The SwingBlaze is two blades in one–a drop-point skinner and a gutting knife that pivot around the handle. Bachmann praised its versatility and felt it provided the “best overall value.” It was sharp right out of the box, said Bixler, adding, “It’s a good, sturdy blade, and the rubberized handle provides a secure grip, even when wet.” Koehler liked the orange handle, which would be “easy to see if you left the knife on the ground when in the field.” He also said the knife was very rugged and versatile.

To Topper, the drop-point skinner didn’t perform as well as the other “pure” skinning knives, but he said, “The gutting knife is life-changing. I didn’t use it to gut any deer, but I used it on almost every deer to make skinning cuts from the anus to the ankles as well as for the brisket, neck, and front legs. All in all, it’s a great knife for the money.”

The Lowdown:
The Mini Tac’s uniquely shaped handle has an integral sub hilt that nestles between your first two fingers to help secure the knife in your hand. “With a conventional handle, your hand can slide up the blade when the knife unexpectedly hits bone,” Bixler said. “This design makes that hazard very unlikely.” But he felt the handle was too thin for an “overall comfortable grip” and scored accordingly. Bachmann agreed.

Because of the thin handle, Topper didn’t have high hopes for the knife at first glance, but his perspective soon changed: “After using it, I couldn’t have been more wrong. The design makes the knife incredibly easy to use; it’s like having a 3-inch laser extending off your index finger.”

A neck sheath made the knife easy to carry and keep handy, said Koehler, and younger hunters who saw his knife thought it “looked cool.”

The Lowdown:
Its ability to keep an edge, even when cutting through thick hides, earned this knife praise from the testers. “Very sharp out of the box and comfortable to hold when wet,” said Koehler, noting that the curve of the blade and its 5-inch length made for “long, clean strokes,” and the large handle lessened hand fatigue.

Bixler agreed that the knife performed well on large game (elk and moose), although he said the blade was “too long for use on deer and antelope. [But] it will take hard use and is the best value of all the knives tested.” Bachmann said the knife was “very easy to sharpen” and was “extremely well balanced and fit my hand well.”

Topper had a similar response: “The knife is well made and was very sharp out of the box but is simply too big for skinning deer.” He did feel the curved blade was a real asset, making it “easy to skin without the worry of the point cutting through the hide.”

Hits: “Built to last.” –Topper
Misses: “Too big for the backpack hunter.” –Koehler

The Lowdown:
Testers were split: Two gave the knife high marks for its compact design; two felt the 2.65-inch blade was too short. They were also divided on the wood handle, as two testers said they’d prefer a composite (available in orange Santoprene for $80). Bixler singled out the knife’s sturdiness. “The heavy blade and frame should stand up to hard use–good performance in a small package.”

The Lone Wolf was “extremely well made and will withstand the test of time, so long as the wooden handle is properly cared for,” said Topper. He liked the curved blade, which kept the tip “from poking through the hide,” as well as the gimping on the top of the tang “that helped me keep a firm grip.”

Koehler, a fan of the compact size, did note, however, that the shorter blade requires “lots of strokes” to complete the job on a large animal. He also felt it was “too hard to maintain and sharpen the blade.”

Hits: “It’s a beautiful piece of craftsmanship.” –Topper
Misses: “Costs too much.” –Bixler