A Step Too Close: Hunting Mule Deer in Colorado

The buck had picked a spectacular spot for a nap. I could only see the antler tips, swiveling in a... 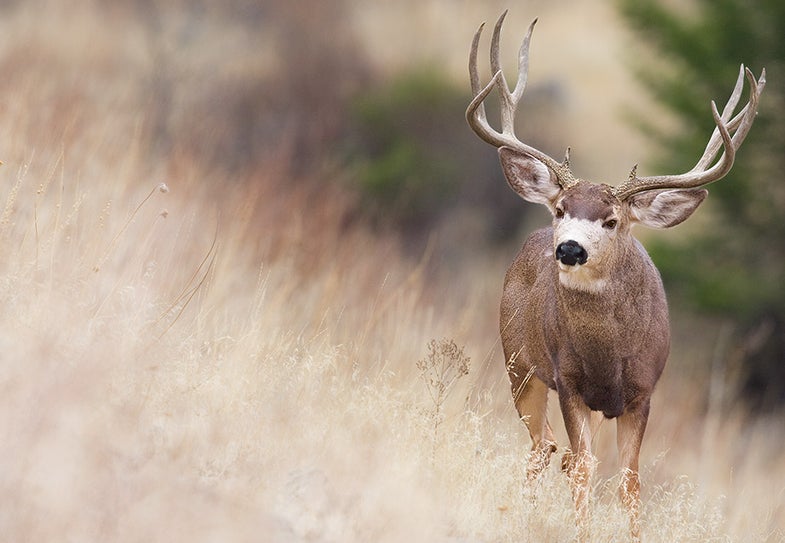 The buck had picked a spectacular spot for a nap. I could only see the antler tips, swiveling in a line of brush on a knifelike ridge sticking deep into the canyon. On three sides the land dropped away, providing a breathtaking view of the valleys and mesas, meadows and timber, that make up this West Slope region of the Colorado Rockies.

The buck was bedded so as to see anything coming from below. His back should have been protected by the wind, but luckily for me it had shifted, allowing me to stalk within 60 yards. I looked at my guide, Scott Bystol, and he shrugged and pantomimed for me to keep going. It wasn’t until I was within bow range that I got a good look at not one, but two muleys, bedded together.

I peered through the peep with the bead on the bigger buck’s chest, and then lowered the muzzleloader. It was a good deer, but we had seen better. Earlier I had told Bystol that what I most hoped to do on this hunt was to stalk within range of a bedded mature buck. Having done so, we smiled and watched the two bucks swiveling their heads and ears, scanning for danger, unaware of the men crouched in the brush behind them. I leaned into Bystol and whispered, “Let’s go find another,” and we slipped away.

Going Big
I’m a terrible trophy hunter. If I’ve had a rewarding hunt and get the chance to fill my freezer, any mature animal is a trophy to me. But I didn’t drop the hammer on that bedded buck because I had decided on this hunt that I was looking for something special. The previous fall I had killed what should be the mule deer of a lifetime for an Easterner like me. And now, one year later, I was hunting the High Lonesome Ranch, a spectacular chunk of mountains with ideal habitat and bucks that can score 200-plus B&C. I was with my good friend Joe Arterburn, who works for Cabela’s, and we were both so stoked about this hunt that during the long trip into the high country our talk grew exuberant. Our visions for the week went from ambitious to epic. Hunting with a muzzleloader topped with iron sights would make it a challenge, no matter how good the property, but I felt sure that I was going to hunt the buck of my dreams.

I found him on the first day. Bystol and I had spent the afternoon still-hunting through a timbered valley that literally reeked of game. Deep game trails ran through the aspens and lodgepoles.

There were elk and mule deer tracks and scat everywhere, and in several spots the rank odor of rutting bull elk was so strong that it brought us to a halt.

At sunset we came out in a creekbottom and looked up a steep hill rising to a sage flat. There, silhouetted against the indigo sky, were two bucks with nearly identical racks: high, wide, and heavy on 4×4 frames but each sporting a crazy collection of stickers and kickers bristling off the back. We made a good play on the deer, speed-crawling around the rim of the plateau until we were within rock-throwing range of the juniper where we had last marked them. And there they were–but we were out of shooting light, and the bucks were nothing more than shadows sinking into the dark.

When the sun rose we were back, having hiked miles under the stars, climbing a rampartlike approach to the flat in order to have the wind right. We figured that Kicker and Sticker, as we had started calling them, would have spent the night feeding in the sage. For most of the morning we crept about, peering into dips and over knolls and glassing–always glassing–trying to spot the deer before they went to bed. No luck.

Before moving on, we sat to have some water and jerky on a rise looking back on the flat, and there they were: five bucks, including Kicker and Sticker, milling about the sagebrush 150 yards away. And then as suddenly as they appeared, they disappeared. We glassed methodically and spotted one of the smaller bucks, bedded down with his head lying flat on the ground. The bucks were on a slight hump, and we figured the two bigger ones were bedded just over the rise.

For an hour we watched and strategized. We could wait for them to get up, but that could take hours, and when they did, would we have a shot? The wind was steady, so we stripped off our extra gear, circled into the breeze, and went after them.

The stalk was perfect. Slow. Silent. Unbearably intense. I peered into the waist-high sage ahead of me so hard that my eyes burned. Who knows what a mountain lion feels before it pounces, but I can’t imagine it’s much different than how I felt. I got to where I was sure they were bedded and stopped, thinking that the bucks had to be just ahead, practically under my feet. That’s when they broke with a rustle and thump. I was off by 15 yards; they were to my right and behind me, and by the time I swung I could only put the sights on the rump of one of the bucks. It was a terrible angle for a shot, but from that perspective their racks looked massive as the deer bounded over the ridge.

Dreaming of Monsters
Over the next four days I stalked lots of bucks. Many busted me before I got within range, streaking across the sage or appearing suddenly where they shouldn’t have been, staring intently at me. But sometimes it worked out, and I got close enough to have to make a decision. No matter how the stalk ended, Bystol would grin and say, “Let’s go find another.”

We had action all week, even the day when a sudden fog moved in, reducing visibility to 50 yards. That morning Arterburn killed a beautiful 4×4 that appeared out of the gloom like a ghost. Then just as suddenly, the fog was gone. The hunting was so good that I was never conscious of the week’s slipping away. Every night we had steaks and bourbon in an old sheepherder’s log cabin and told stories of animals and mountains. I was so worn out and satisfied that I was dreaming as soon as I doused the lantern in my wall tent.

But on the eve of the last day of the hunt, I couldn’t sleep. I thought about some of the deer I had passed on, but most of all I relived my brushes with Kicker and Sticker. Although I had ultimately bungled the stalk, neither Bystol nor I had felt any regrets. We got aggressive, crept undetected within 20 yards of two trophy mule deer bucks, and almost got a shot.

Watching the canvas above me rattle in the wind, I pictured Kicker and Sticker as I had twice seen them: silhouettes as stark and exaggerated as petroglyphs on a cave wall, antlers looming over their leaping forms. Maybe it’s because I’m a writer, maybe it’s because hunters are by nature dreamers and optimists, but as I drifted off I felt this improbable certainty that my hunt would end with Kicker and Sticker.

Moment of Truth
e were still in the truck, just a couple of miles out of camp, when we saw a bachelor group of 10 to 15 bucks streaming up a hillside, their hides shining in the morning light. In the mix were Kicker and Sticker. The herd was headed for the same sage flat where we had stalked them earlier in the week.

We hid the truck, bailed out, and glassed them from 350 yards away. The wind was perfect, and since we had hunted this spot extensively at the beginning of the week, we knew that all we had to do was wait for them to go over the rise and onto the flat. Then it would be nothing to creep over the hill, the breeze in my face, and make a chip shot. The scenario was as close to a sure thing as you could get.

It went just like we had expected. In 15 minutes we were at the edge of the hill, looking at the flat below us. It was empty. We heard a scrape, a rustle. Then we saw a small buck appear ahead of us on the flat and realized that Sticker and Kicker and the rest of the herd were hidden under the lip of the hill and were directly below us, all within 50 yards. They would step into view at any moment.

I couldn’t have written a better ending to the hunt. After many miles of hiking and countless stalks and many good bucks passed up, what better way to finish it than with a picture-perfect, last-day stalk on the monster bucks that had outsmarted us twice and been our obsession all week?

I sunk to one knee and placed my shooting sticks in front of me. I could see only the one buck feeding away from us, and I was concerned about the high sage in front of me blocking my shot. After a long minute I eased forward, just a touch, to shift into a slight opening. Bystol nodded and reached over to adjust the sticks.

Bucks erupted from the sage below us. Before I could get the sights on them, Sticker and Kicker were gone, bounding into a ravine off the edge of the flat.

There is no other way to describe it: I blew it. Seeing that empty flat below us, knowing the bucks were so close, had unhinged Bystol and me. We both wanted these bucks so badly, and felt so good about the setup, that we got aggressive and sloppy when all that we’d needed were calm and patience.

This one hurt, and we were poor sports about it. We cursed. We sulked. We beat ourselves up. We replayed the scene over and over. I kind of wanted to just go back to camp.

Two hours later I was still brooding when we spotted a buck feeding alone. An easy 100-yard stalk brought me within 80 yards. As he browsed, his 4×4 rack shook the brush. I centered the bead in the peep and put it behind his shoulder. He was a decent buck, his antlers tall and wide if just a bit thin. I had passed on bucks like him earlier in the week. It was only 10 a.m. and I still had a full day in front of me in one of the most incredible places I’d ever hunted.

When Bystol saw me walk out of the canyon, rifle slung over my shoulder, he smiled and said, “Let’s go find another.”